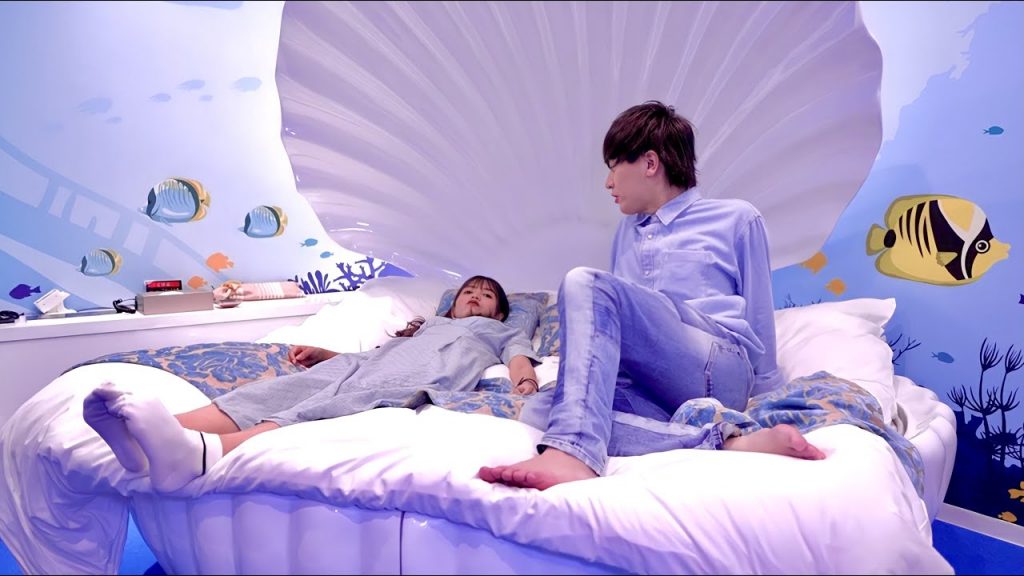 The nostalgia for the gaudy designs of these lodgings that can be reserved by the hour is enough to inspire most couples “to get a room!”

Japanese “love hotels” are, essentially, the equivalent to a “motel” that have traditionally been rented either for the night or for only a few hours by couples desperate for some privacy. Their history dates from the time when personal space was, essentially, non-existent. Thus, the “love hotel” offered a respite and a private place far removed from the routine, cramped, and communal living conditions. In Japan, the customer experience at such inns is, however, often taken to a whole new level.

The phenomenon of the Japanese love hotel is, however, not a relatively recent development. Their predecessors have been around for quite a while.

A Brief History of the Japanese Love Hotel

It turns out that the modern-day love hotel emerged from a long history of such establishments.

Certain teahouses, the historical equivalent of a combination restaurant and inn, were often not just where you went to get a cup of tea.  For a little extra yen back during the Edo period (1603 – 1868), futons would be laid out in a back room for a degree of privacy and comfort.  Such places were called “hook-up teahouses” or deai chaya (出合茶屋) in Japanese.

During the subsequent Meiji period (1868-1912) the term for such places morphed into a “teahouse for meeting” or machiai chaya (待合茶屋).  At the beginning of the Showa period (1926-1989), cheap lodgings that only cost a few yen called enjuku (円宿) appeared.  They were also available for rent by the hour and are, therefore, considered to be the prototype of the modern Japanese love hotel.

After World War II, inns that were originally run as budget accommodations for laborers became the go-to location for couples without a place of their own.  They were called tsurekomi yado (連れ込み宿) and could be rented for only a short period (less than a night).

These lodgings were very popular because they provided a place for a couple to take a bath without worrying about being seen.  During this period only the very wealthy had baths at home.  Everyone else simply had to use their local public bath, where there was no privacy and everyone would talk about everyone else’s business.

Thus, during the period of rapid economic growth in the 1960s, the need for privacy which could be purchased on a budget for only a few hours at a time led to the emergence of the modern urban and suburban “love hotel” in Japan.

Such hotels often had telltale characteristics both on the inside and outside.

Lit up in Neon

In the 1970s, with the ground-breaking Osaka World’s Fair, the yearning for foreign countries became stronger.

Love hotels with Western names written horizontally became in vogue (vs. the traditional method of writing the Chinese characters used in Japanese from top to bottom). To stand out, the names were advertised with glowing neon lights.

While some Japanese love hotels from the Showa period were housed in relatively non-descript buildings that could only be identified by their bright neon lights, as Japan started to become wealthy, many creative proprietors began to design the entire structure in ways that were certain to stand out and would attract new customers.

Many of these places still scream their existence today. The castle theme is, in particular, a longstanding favorite.

For those that prefer more of a nautical theme, there are plenty of other options including the Hotel Que which is permanently moored far inland adjacent to the expressway exit.

Most offer on-site parking in a parking lot that is concealed from public view for maximum privacy.

While not all Japanese love hotels shout out their existence based solely on their exterior design, a general rule of thumb is to look for bright neon lights.

Interior Design as the Real Forte

The interior of the Showa era Japanese love hotel is, however, the source of the real magic.  Many were designed to take their part-time inhabitants to a fantasy land where they could leave behind their mundane life and everyday struggles.

The proprietors of such love hotels would sometimes spare no expense to offer over-the-top amenities such as revolving beds and mirrored walls. Instead of merely providing cookie-cutter style accommodations like a modern-day “business hotel,” Showa period love hotels would often feature individual rooms with various themes.

Some rooms were designed to transport a couple back in time.  An adventurous couple could, for example, pretend that they were aristocrats who lived an extravagant lifestyle several hundred years ago.

Love hotels would often be a couple’s first experience with amenities not typically found at home including the Jacuzzi bath.

A particularly common element was, however, the mirror.  Many Japanese love hotels feature rooms that are literally covered from ceiling to floor with mirrors.

The overall effect makes the room appear that much bigger, while the mirrors on the ceiling are, perhaps, for narcissists.

By providing extraordinary interiors, flashy decorations, and state-of-the-art facilities, word-of-mouth spread and brought in new customers.  During the post-war Showa period when working hours were long, Japanese love hotels provided a much-needed escape from reality.  They were the first to introduce the latest TVs, air conditioners, karaoke, and games.  Revolving beds and mirrored rooms also helped to lift the spirits of couples. These inns were places to experience a little of the extraordinary—even if for only a few hours.

Then the “do-gooders” tried to spoil all of the fun.

Many of the love hotels from the Showa period were, however, somewhat of an eyesore on the environment and symbolized a degree of decadence that prudes found unbecoming of a nation trying to reemerge as a global power.

No More Mirrors on the Ceiling

In 1985, with the enforcement of the new Entertainment Establishments Control Law, the revolving beds and mirrored rooms that symbolized the love hotels of the Showa era were no longer made, and the fashions in interiors and facilities changed with the times. During the subsequent decades, the love hotels built in the Showa period have started to disappear due to the aging of the buildings, high maintenance costs, and the retirement of the owners.

Lately, the remaining establishments have, however, mounted somewhat of a comeback.

Not Just for Couples Anymore

Japanese love hotels now have some plans designed for singles.

The Hotel Fuki (see photo above) has been operating in the same style since its founding in 1977.  The rates vary depending on the room, but a single person can now get a discount.

Japanese love hotels from the Showa period are also popular as filming locations.  Especially combined with cosplay, the rooms are certainly very “Instagramable.”

Recently, groups of young women who seek refuge from the often oppressive social demands of Japanese society are eagerly seeking out Showa period love hotels.  The proprietor of Love Hotel Varian in Shinjuku, which was one of the first to offer a so-called joshikai (大人女子会) or  “Girls Party” plan from 2009, explained,

The love hotel has evolved into a place for relaxing girl talk without worrying about the people around you. This is not the case with restaurants or karaoke.

Girls parties are particularly popular on Christmas Eve, when there is often a long waiting list of customers.

If we just have dinner, we can only stay for a couple of hours and can’t talk deeply, but if we stay at Varian, we can talk about many things. It is also important to note that the hotel is fully equipped with amenities such as contact solution…They also have flower baths, balloons, and tapestries so that you can take pictures that will look good on social media.

These customers are mainly students between the ages of 20 and 22, and people in their early 20s who are in their second or third year of working, but the number of people in their late 20s and 30s is also increasing. Most of the customers are women who want to celebrate their birthdays or enjoy a short trip, but recently, it has become a topic of conversation from an unexpected segment of the population.

The newest patrons are the so-called “otaku girls” who love idols, anime, and 2.5-dimensional art. 2.5D is the concept of taking a drawing, isolating the different objects and displaying them at different depths to introduce the effect of parrallaxes.

The individual pieces are still 2D, but the effect is kind of 3D. Thus, the name 2.5D.

Ready to Stay at a Japanese Love Hotel?

Although only available in Japanese, the website Couples is, perhaps, the ultimate clearing site of love hotels in Japan.  The site is conveniently organized by geography, but their database is also searchable by age of the facility, local reviews, and other amenities which are typically not listed on general travel sites (e.g., in-room and balcony pools with underwater lighting, suitable for cosplay photography, in-room massage chair, etc.)

The local reviews or kuchi-komi toko (口コミ投稿) in Japanese can come in handy, as the old saying caveat emptor (buyer beware) certainly applies.  A review of an old love hotel near my home invites caution,

It was cold…I only used the room to sleep. The room was cold even with the heater on. Also, the futon was very small…

Okay, then, I guess that we’ll be skipping that one!

Couples.jp can be used to make reservations, which may help some shy customers to avoid having to make a potentially embarrassing reservation by telephone.

Although Japan’s borders remain closed due to the ongoing global pandemic, whether you are a single traveler, visiting as a couple, or coming with a group, just as soon as Immigration opens up consider “getting a room” at a Showa period Japanese love hotel for an extraordinary experience during your next visit to Japan.