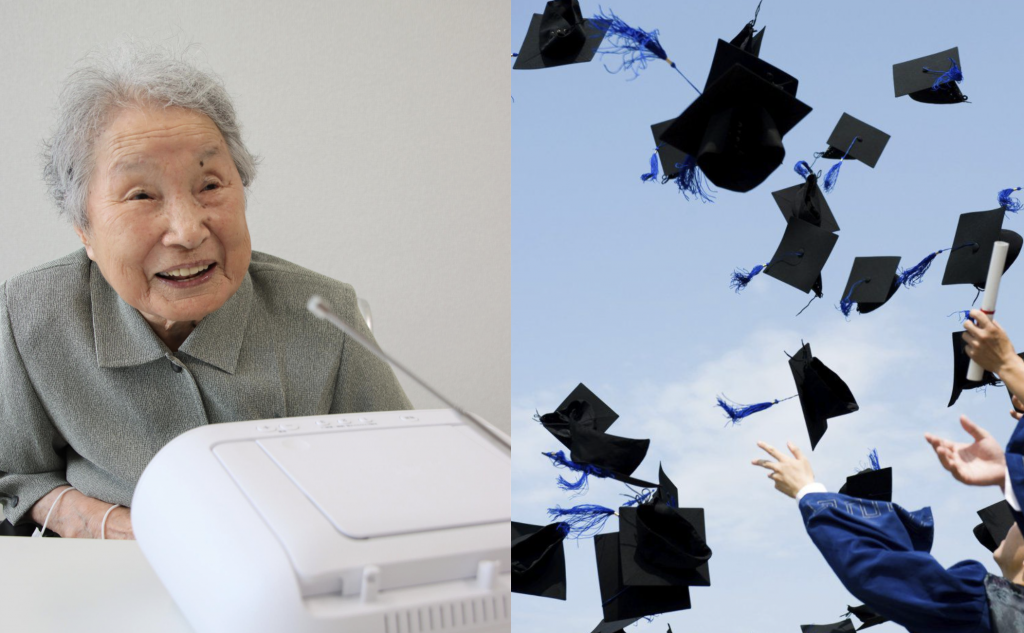 “It had been 40 years before I knew it” claims 105-year-old Fumiko Kobayashi, who has been enrolled in college for 40 years as she continues her journey of lifelong learning!

You never stop learning because life never stops teaching.  In other words, you learn something new every day.  Albert Einstein once said, “once you stop learning, you start dying.”

While we do continue to learn new things until the day we die, not all of us find ourselves learning formally, as in being a literal student, past a certain age. However, for 105-year-old Fumiko Kobayashi, the saying “you never stop learning” truly applies.  Kobayashi is likely the oldest person in academia in the world, truly embodying the concept of “lifelong learning.”  She has been a student at the Hyogo Radio College, a radio-based university for the elderly, for 40 years.

Students of Hyogo Radio College receive texts and readings each month in the mail and tune into lectures from academics that are held every Saturday at 7 pm, a total of 52 broadcasts a year.  They are also prompted to send postcards with their thoughts, opinions, and feedback.

They also have a “Friends Association” where students can take part in group study sessions, social gatherings and events, as well as field trips and outings.  There are also many volunteer-based activities like writing newsletters.

The centenarian has been tuning into lectures and writing letters in response to lectures at least twice a month for 40 years, making her their longest attending and oldest student.  Hyogo Radio College currently has around 1,700 students enrolled.  Further, the tuition fee that includes monthly texts and readings is only 5,000 yen (45 USD) a year or 6,000 yen (55 USD) for undergrads.

Kobayashi enthusiastically stated that “It had been 40 years before I knew it!” and that it was “fun to be able to continue studying and learning a lot”.

Michio Koyama, chairman of the “Friends Association” has the utmost respect for Kobayashi and regularly praises her as being a model student who is extremely enthusiastic about continuing her lifelong journey of learning.

Fumiko Kobayashi was born in 1915 during Japan’s Taisho Period.  For further context, 1915 was during World War 1.  Kobayashi married at 18, and had two healthy children with her beloved husband.

During World War 2, her husband was a soldier and unfortunately, the war took his life.  Following this, Kobayashi devoted herself to agriculture and with the help of her children made a living.  One of her favorite hobbies used to be Tanka, traditional Japanese poetry.

At age 65, Kobayashi began listening to radio lectures after one of her older friends suggested she enroll.  After a year of being an undergraduate, Kobayashi became a lifelong listener.  She noted that compliments are given to students every 5 years, and Koybashi just recently received compliments for being enrolled for 40 years!

She often worked on initiatives that aimed to improve the lives of women in her area as well as visit and spend time with senior citizens who lived alone.

In recent years, Kobayashi began attending a senior citizens center three times a week.  While she notes that her legs have begun to be weaker compared to the past, she is still out and about with the support of her family.   She also makes sure to read the newspaper daily.

On top of this, her great-grandson stops by at her home on his way back from school for a snack and helps out around the house as well as mailing her postcards for her.

When asked about her secret to living a long and happy life she replied that she felt that “the feeling that I have done my best to help society supports my heart.”  When asked if she had any advice for the younger generations she said “It’s important to live in harmony with each other, that’s all.”

The heartfelt story of a mother who couldn’t afford to buy toys for her children decided to make the toys they wanted…
December 16, 2021