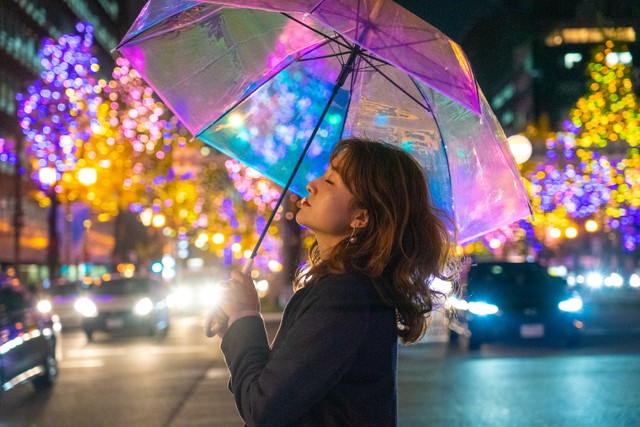 The Aurora Vinyl Umbrella is not just for the rain. It’s also popular for Instagram and cosplay!

In the West, it is relatively unusual to see people using umbrellas in the winter. However, in Japan, umbrellas are used year-round to protect against the rain, sun, and snow. One clever Osaka-based manufacturer of rain gear has found a way to get people to use their umbrellas at night even when the weather is good.

World Party Co., Ltd. sells a unique umbrella designed with vinyl panels that seem to transform night illumination into what looks like the Northern Lights or the aurora borealis. This phenomenon is simply called “aurora” in Japanese. Thus the new product is aptly marketed as the “Aurora Vinyl Umbrella.”

This one-touch umbrella is flying off the shelves.  10,000 of them that were released in the spring sold out by October.  More recently World Party just launched a new hand-opening type for the winter.

Not just for a rainy day…

Despite the colder weather the Aurora Vinyl Umbrella continues to sell at a brisk pace because of its popularity on Instagram.  A spokesperson for World Party explained that “it makes it possible for anyone to take beautiful pictures.”  This is true, especially when combined with holiday lights and other decorations.

World Party added, “Aurora umbrellas are recommended because you can take pictures with a warm atmosphere if you make good use of the light from winter illuminations.”  The panels are, in fact, so colorful that there is no need to use a filter prior to posting on Instagram.

The aurora-colored umbrella recently gained even more popularity because it was featured in the “making of” video of the 2021 calendar released by 30 year Japanese actor and male model Shota Matsushima.

Works as a “shining prop” for cosplay…

The Aurora Vinyl Umbrella is also finding success as a popular “shining prop” for cosplay. It is becoming part of a new trend among cosplayers to incorporate an object that reflects their image and thereby enhancing how they appear in photos.

How do I get one?

World Party (https://wpc-worldparty.jp/) markets the Aurora Vinyl Umbrella as part of their Wpc. line of rain gear. The new hand-opening type is sold for 2,200 JPY (tax included) at PLAZA, LOFT, and EC sites throughout Japan.

“Silent Eating” at Restaurants is Spreading Across Japan

Japan has begun implementing moku-shoku, or “Silent Eating” in various restaurants as Corona cases remain high despite a State of Emergency.
January 21, 2021

The Kadokawa Museum is a fascinating blend of design, literature, and art. The facility boasts a dazzling light show and over 50,000…
November 16, 2020