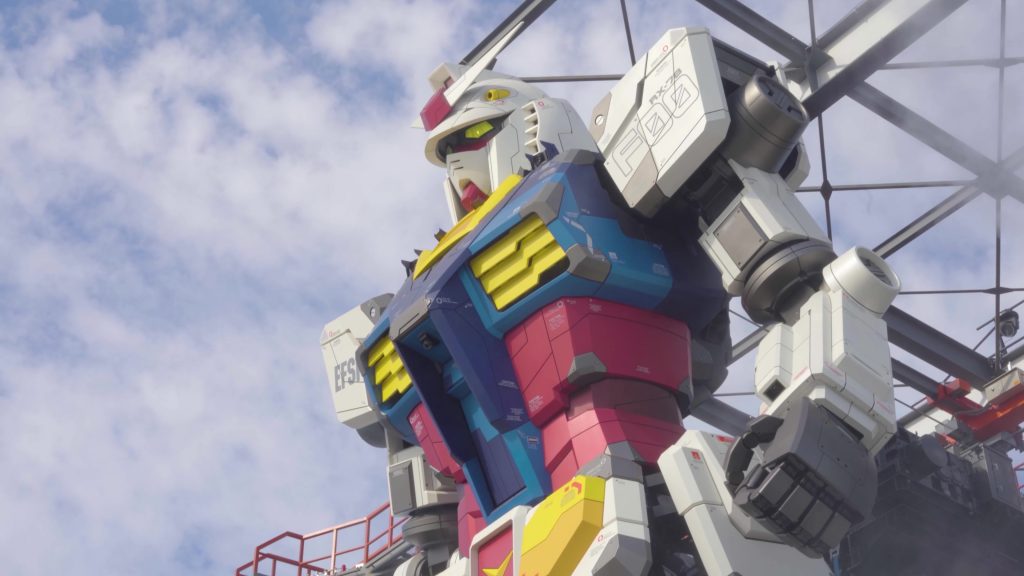 A 18-meter-tall, moving Gundam has been constructed at in Yokohama. The full-scale robot weights 25 tons and can perform a variety of moves.

Gundam Factory Yokohama located has unveiled a massive, full-scale Gundam that stands at over 18 meters tall and weighs over 25 tons. Located right on the bay of Yokohama, it looks like a towering guardian over the city. With impressive attention to detail and two different sets of various movements, this is a must-see for all Gundam and giant robot fans.

The full-scale model is of the Gundam RX-78F00, one of Gundam’s most classic models. Its completion marks the third giant Gundam model to be produced in Japan and the first-ever moving one ever to be made.

A Gundam Brought to Life for the First Time Ever

A life-size version of Gundam model RX-78F00 has at last been revealed to the media. The moving behemoth stands at 18 meters tall and is the centerpiece to the recently created Gundam Factory Yokohama. RX-78F00 features 18 flexible joints in its hands alone. The rest of its body has 24 moving joints, which enable it to perform, unlike any Gundam replica that has come before it. The RX-78F00 showed off various moves during its performance, including walking, kneeling, and even jumping. This giant robot can not only move like its fictional counterpart but also is covered in immaculate detail from its head down to its feet.

Like previous Gundam models before it, the RX-78F00 in Yokohama also features light-up features on its body such as glowing eyes that can change colors and various accompanying sound effects to match the Gundam’s actions. Each of its finger joints can be moved individually and its head can be turned side-to-side and up and down. Gundam Factory Yokohama will be open to the public from December 18, but a pre-launch event was held earlier for the press. The Gundam’s move sets come opening day may differ from the ones shown during the pre-launch event.

Meet One of the Creators Behind Japan’s Giant Gundams

Masaki Kawahara is in charge of the overall design and direction of Gundam RX-78F00. He also leads the project for the very first to-scale Gundam model unveiled in Odaiba back in 2009. Mr. Kawahara stated that ever since the original Gundam was first constructed, there have been numerous requests from fans to make the Gundam move, but, according to him, doing so at the time was simply something “we could not do.” After years of expectations that a moving Gundam was in the works, Mr. Kawahara claims that he is proud to have finished what he feels is the collective wishes of the fanbase.

When asked about difficulties with construction on this project, Mr. Kawahara noted that attempting to blend aesthetics with functionality was difficult to overcome. The many motors and gears required to move the robot needed to be installed in a way as not to interfere with the design. Therefore, according to Mr. Kawahara, “We had to choose light materials and think of shapes that could be made from those.”

See the View From Above

For those wishing to get even closer to the RX-78F00, you can take a lift up to the top to admire its stunning details.

Take a Break Inside the Gundam Factory

After seeing model RX-78F00 up close, head over to the Gundam Factory for some shopping and eating.

The building contains the Gundam Cafe, a unique restaurant where you can grab a bite to eat and drink with Gundam-inspired items such as seaweed shaped in the shape of model RX-78F00.

Stock Up on Unique Merchandise at the Gundam Base

There is also a merchandise store located on the premises called The Gundam Base. Here you will be able to purchase a wide variety of unique Gundam-related goods, from t-shirts to miniature models of the RX-78F00.

For those that wish to enter the observation deck to see the Gundam up close, it will cost an additional ¥3,300 per person.

© SOTSU-SUNRISE / All Gundam related images that appear in this article are copyrighted by SOTSU and SUNRISE.

Meet Japan’s most aspiring real Ninja, Mr. Yaen Sasuke. Sasuke has been training Nin-jutsu since he was three years old, and he…
August 17, 2021

CAT ISLAND 2021 – How are Japan’s Island Cats Coping without Tourists?

Situated in the middle of the Seto Inland sea, Aoshima is tiny but probably the most famous of Japan’s eleven cat islands.…
August 14, 2021

How Japanese Knives Are Made With Japan’s RAREST Steel

We’ve come to Hirata Blacksmiths to see how Japan’s rarest steel is processed to produce knives of unrivaled quality.