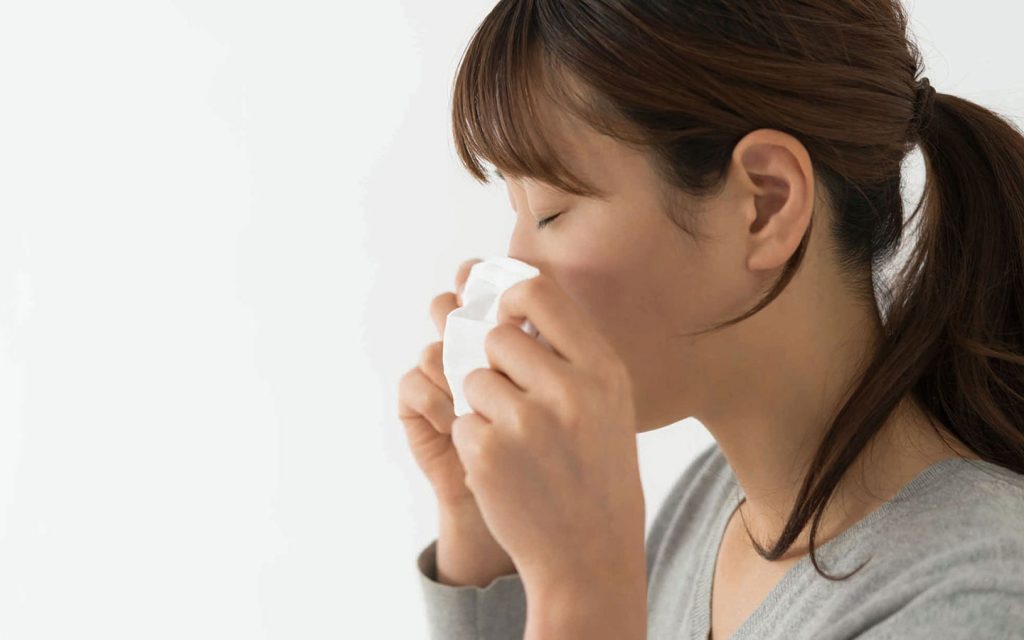 The annual season of runny noses and itching around the eyes has already gotten underway in the west and is now making its way east across Japan.

Weather patterns typically make their way across the Japanese archipelago from west to east. Right now is the early part of the annual hay fever season, which affects millions of people in Japan. Why do so many Japanese suffer from hay fever allergies?  What are the symptoms? What, if anything—besides waiting for the season to pass—can be done about it?

What are the typical symptoms?

Hay fever, which is called kafunsho (花粉症) in Japanese, is a disease that causes allergic symptoms, including sneezing, a runny or stuffed up nose, and itching around the eyes.  Sometimes it also causes the throat to itch, diarrhea, and fevers.  The proper medical term for this condition is allergic rhinitis.

A Japanese Twitter user summed up these miserable conditions by tweeting, “Is everyone okay?” along with an attachment of her original art which says, “Spring.  I hate having a runny, itchy nose!”

What is the root cause?

The main culprit is pollen from sugi (杉), Japanese cedar.  Hinoki (ヒノキ), Japanese cypress, is also a co-conspirator that follows its now ubiquitous cousin by a few weeks.  Japanese cedar did not used to be so plentiful. Right after World War II, much of the country had been de-forested, and rapid growth cedar was chosen as an ideal source of timber to support the post-war economy.  Although demand for domestically grown lumber products waned, the cedar has remained. Many cedar trees have, in fact, now matured to the point of their peak age for flowering.  Global warming seems, moreover, to cause the trees to release even more pollen.

Air pollution is also culpable.  As development continues, the ever-expanding footprint of paved surfaces in cities may also cause airborne pollen to blow from place to place rather than stick to the surface. Finally, the long-term shift to a high-protein / high-fat diet combined with stress from everyday life can make you more susceptible to allergies.

Just how widespread is the problem?

The prevalence, the proportion of cases in the population, is 38.8%% for cedar in Japan. That comparatively high rate is still increasing.  The situation is not quite so bad in other countries. The estimate is 25% in the U.K. and only 7.7% in the U.S.

Although for suffers of hay fever this year’s season may seem just as bad as ever, it turns out that 2021 is, in fact, anticipated to be a little less of a problem than a more typical year.  The state of affairs for huge swathes of the country is, however, likely to be worse than 2020.

The Japan Weather Association recently published a forecast for pollen dispersal.  There is good news for most of the country—particularly for Kyushu in the southwest–which is expected to experience much less pollen than during a normal year.  For Hokkaido and the Tokai Region the amount of pollen should be about the same as during a typical year.

Don’t get all that excited, though!  For much of the country, the situation will seem worse than in 2020.  Compared to last spring, there will be more pollen from the northern tip of Kyushu to Kanto and in the Hokuriku Region.  Tohoku will be on par with the previous season.  Hokkaido is, however, the place for suffers from hay fever to go in 2021, as there will be noticeably less pollen there.

Beside simply waiting it out, what—if anything—can you do about hay fever?

What can you do about hay fever?

First, consult a doctor as soon as possible.  It is, in fact, probably a little too late for some people in the western part of the country.

For allergies such as hay fever, drugs tend to be less effective when taken only after the symptoms become noticeable.  Ask your doctor about the approach of pre-emptive, “initial therapy,” which should be started up to 2 weeks before the pollen starts to fly and/or when the symptoms are mild.

There are, in general, medicines available to address both the symptoms of a runny or stuffy nose as well as itching around the eyes.

For a runny or stuffy nose, oral drugs such as second-generation antihistamines are mainly used for initial therapy. Nasal spray steroids (nasal drops) and leukotriene antagonists are used in combination when symptoms are severe. Please note that some medicines are not available at drug stores and can only be obtained by a doctor’s prescription.

Twitter is alive with lots of complaints about itching around the eyes at this time of year.

A Japanese Twitter user tweeted, “My eyes are swollen due to hay fever, as usual.  I am working with my ophthalmologist to adjust the dosage of my medicine to relieve the symptoms…I’ve reduced the amount of screen time in front of a PC and smartphone, but I want to see ‘the evil flowers.’”

If the symptoms become severe at the peak of pollen dispersal and the anti-allergic eye drops are not sufficiently effective, steroid eye drops are sometimes supplemented.  Please note, though, that when using steroid eye drops, regular examinations are required to check for side effects such as increased intraocular pressure.

Besides resorting to drugs, you can attempt to block pollen from getting in your eyes.  First, if you wear contact lenses, simply switch to glasses for a few weeks.  You can also purchase special hay fever glasses that literally wrap around your face.  The effect appears similar to wearing a pair of ski goggles.

There are also cushioned, transparent adapters which fit on a regular pair of glasses to plug the space in between your face and the glasses.

While this year’s hay fever season may get you down, rest assured that the season will not last forever.  In the meantime, you can look forward to the cherry blossoms, which are right around the corner.  Enjoy this time of year, as after that and before long, it will be time to prepare for the annual typhoon season!