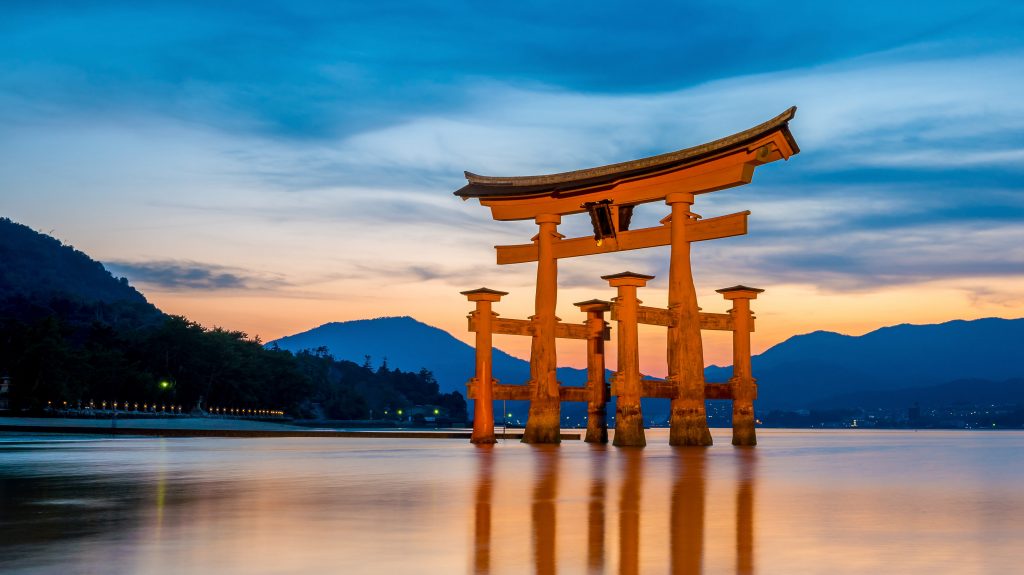 Palace on the Sea (Itsukushima Shrine)

Itsukushima Shrine is the only “water floating shrine” that exists in the World and one of the most popular site-seeing spots in Japan.

Itsukushima Shrine is “the only water floating Shinto shrine” that exists in the world and now one of the most popular site-seeing spots in Japan. The shrine is listed as a UNESCO World Heritage Site, and the Japanese government has designated several properties as National Treasures. The name Itsukushima means the ‘island of worship’ and from ancient times the island itself was worshipped as a female god.

Legend has it that Itsukushima Shrine was erected in 593 supposedly by Saeki Kuramoto; however, the present shrine has been popularly attributed to Taira no Kiyomori, a prominent warlord (daimyo) who contributed heavily to the building of the shrine during his time as governor of Aki Province in 1168.

Another renowned backer of the shrine was the warlord Mori Motonari, lord of Choshu, who was responsible for rebuilding the main building in 1571. It was common during the 16th century for daimyo to build shrines or take on other architectural projects in order to “display their power and splendor.”

The shrine was designed and built according to the Shinden zukuri style, equipped with pier-like structures over the Matsushima bay to create the illusion of floating on the water, separate from the island. The shrine is often described as “the palace on the sea”. Japan has gone to great lengths to preserve the twelfth-century-style architecture of the Shrine throughout history.

How to get to Itsukushima Shrine (the standard way)

2. Walk from JR Miyajimaguchi Station to a Ferry Station (10 mins)

Also, when you get to Miyajima, definitely try “Age-Momiji”. Momiji Manju is momiji (maple) leaf shape Manju, a classic Japanese sweet made by wrapping flavored ingredients such as azuki bean jam in kneaded dough made from wheat or other ingredients. Age-Momiji is the Deep-fried version of Momiji Manju, which is quite rare (probably only available on Miyajima) even in Hiroshima and tastes fabulous.

You can try Age-momiji at a store below: