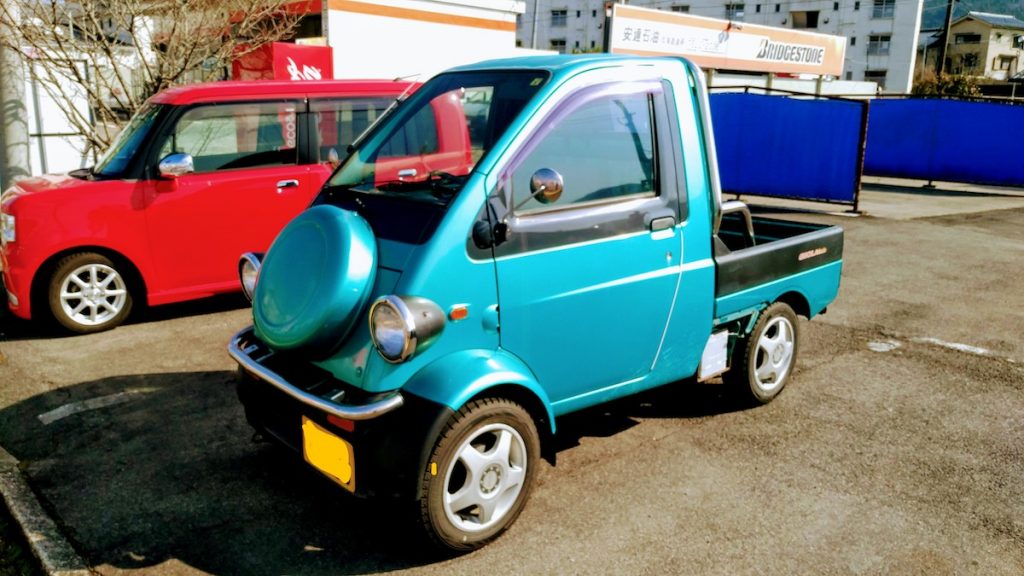 Japan’s kei cars really are in a class all by themselves. Their quirky styling, color options, and practical designs offer drivers with a wide range of options.

Calling the whole Cast of Carol, Sambar, Jimny, and Stella! Do you aspire to be a Hustler? Well, it’s your Life, so form a Scrum and get a Move on to Samba on over here before it’s time to Vamos! Grab a Capuccino, Mila Cocoa or even some Pino before we meet up at the Bistro!

At this point you’re probably wondering what is going on here. Well, all of the words printed in bold typeface above are brand names of some of Japan’s ever-popular “kei-cars” or “light-weight” automobiles which collectively form the smallest class of highway-legal cars available in the country. There are more than 100 varieties sold by all of the major Japanese automobile manufacturers. Kei cars comprise a special regulatory class of small cars with only a 660cc size engine which, while more powerful than a lawn mower, will severely limit all of you aspiring Michael Schumacher wannabees from overtaking slow pokes who strictly adhere to the posted speed limit. Hey, sometimes you just have to compromise! Due to their exceptionally creative design, many kei cars are, however, hardly a compromise. They offer a lot more than just a catchy name, and they do so a very affordable, entry-level price.

First and foremost, besides a relatively low list price or monthly leasing fee what may get your attention is the fact that kei cars qualify for lower taxes and less expensive insurance rates than regular size cars. Although the savings are nominal, every little bit helps when operating a car in the land of 150 JPY/liter gasoline. Vehicle excise taxes are only 2% at the time of purchase which is a full percentage less than the tax rate for a larger car. Automobile weight taxes which are paid after the required biennial inspections (shaken) are slightly lower, as well. The cost of compulsory insurance is usually more reasonable, and the cost of operating a kei car is typically significantly lower than the relatively high expenses associated with owning a regular-sized vehicle in Japan because of their fuel efficiency. Gas mileage varies by model, but many kei cars such as Toyota’s Pixis Epoch reportedly can achieve more than 34 kg/liter which certainly goes a long way toward reducing sticker shock at the gas pump. The hybrid models provide, naturally, the lowest fuel costs. Although this benefit does not apply for car owners who live in the middle of Tokyo, outside the major metropolitan areas with a kei car there is no need to produce documentation to prove in advance of purchase that you do, in fact, have a place to park your car. Given their small footprint, it must simply be assumed that you’ll be able to find a place to stash your new ride!

Just by looking at its bright yellow license plate you can tell at a glance if that tiny vehicle that just passed you is, in fact, a kei car. The license plates of commercial kei vehicles are inversely printed all black with yellow numbers and letters. It is, however, sometimes not quite so easy to identify a kei car solely by its license plate because it is now possible to purchase for a small fee of only about 1,000 JPY a vanity license plate with a prefecture-specific background which can be used to replace the typical, all yellow license plates normally reserved for kei cars. (Vanity plates can be put on regular sized vehicles, too.)

Even if you decide to go with the all yellow license plate, you will, most likely, have a wide variety of color options with which to mix and match the body of the car. Unlike the vast majority of regular size cars which primarily come in white, silver, or black, it seems as though most kei cars on the road are only available in colors other than those three old-standbys. The more outlandish the color, the better seems to be the preference of many kei car drivers. One of the latest trends is, moreover, a resurgence of two-tone paint options. Japan’s kei cars allow you to re-live or imagine for the first time what it was like to drive back in the 1950s and 1960s when two-tone paint jobs were all the rage. So how about spicing it up a bit with a baby blue Honda N-Box with a white roof or maybe one with a white body and bright red top?

Attracted by their daring paint jobs many foreign visitors to Japan fall in love with kei cars but are frustrated to learn that they are not available back at home. Kei cars are generally only sold in Japan because their profit margin is, apparently, too low to justify export. To visitors from North America some models such as the Daihatsu Copen or Honda S660 are a real novelty. These convertibles (“open car” in Japanese) look like they might have come from a toy store and are better suited for a slot car race track.

While those two-seaters are exceptionally small, most kei cars are available with enough room to seat four adults relatively comfortably. The most unusual designs seem, though, to be constantly trying to outdo their peers by striving to be as cute as possible. Along with their cute names and bizarre color schemes, many just look “kawai” (adorable). Kei cars with Italian-sounding names are often designed in the style reminiscent of classic European mini-cars from the 1950s, although some appear more like the infamous Trabant made in the former East Germany.

While many of the ultra-cute models simply do not appear to be all that practical, the top selling kei cars are exceedingly functional. They fall into the category known in the automobile industry as “micro-vans.” While definitely smaller than the ubiquitous mini-van which is the perennial favorite of “soccer moms” in American movies, Japanese micro-vans such as the best-selling Daihatsu Tanto, Honda N-Box, and Suzuki Spacia are surprisingly roomy and feature sliding doors in the back, fold-down seating and cup-holders galore!

Not all kei cars are, however, designed for those who want to appear as “kawai” as an anime character or for families who want to fit as much as possible into a box-like vehicle that can still be parked in the narrowest parking spaces. One particular model conjures up images of a Range Rover on safari in Africa or a Jeep fording rivers and streams in the jungle. I’m talking about the venerable Suzuki Jimny, a cult classic which has been providing four-wheel drive enthusiasts around the world with a rugged design in a compact package since the late 1960s.

No matter which design you choose, it is important to remember that kei cars have a relatively small, light-weight engine. While this may be useful for achieving advantageous gas mileage, you may find it harder to accelerate—especially when driving uphill. Some kei cars have a magic button to address this issue. They come equipped with a stealth “power mode” which can be accessed by pressing the “PWR” button on the steering wheel with your thumb. It is sort of the equivalent of down-shifting with manual transmission. The extra boost does reduce gas mileage to a certain degree, but it is often all you need for just a bit more “get up and go” which is useful for such mundane tasks as climbing hills and especially comes in handy when loaded down with heavy passengers in back!

While also commonly used for delivering kegs of beer to the hole-in-the-wall izakaya bars in the back alleys of Tokyo, Yokohama and Osaka, anyone who travels outside the big cities knows that kei-tora or the pick-up version of a kei car can be found everywhere in the Japanese countryside (“tora” is the Japanese abbreviation for “truck”). There’s a catch, though. They are available in any color you want, as long as it is white! Just kidding! Although the vast majority of kei-tora used for hauling building supplies, transporting small amounts of freshly picked fruit and vegetables, or moving light loads of just about anything are, in fact, painted white, there are now a few other color options for those who want to live on the edge. The HiJet Truck from Daihatsu can be ordered in a daring metallic orange.

Although for some reason this particular offshoot of the HiJet family can no longer be ordered in that color, perhaps one of the most unusual kei-tora is the HiJet Deck Van, a chimera of the front of a micro-van and a very short cargo carrier of a pick-up truck. There is really nothing else like it on the market. While the HiJet Deck Van does look a little weird, it is great for transporting small amounts of cargo and beloved by farmers. It is very practical for hauling just about anything for when you don’t want to mess up the inside of your truck and don’t mind if your cargo gets wet. If these options are, however, just too big for you, then there is always the single-seat kei-tora with the politically incorrect name Midget which can probably be maneuvered down a back-country trail!

Japan’s kei cars really are in a class all by themselves. Their quirky styling, extensive color options, and practical designs (along with quite affordable pricing and running cost) offer drivers in Japan with a wide range of options. So, if you’re in the market for a new or used car in Japan, you may ought to reconsider your original plans for a gas guzzling SUV and simply get back to the basics and have some fun with a brand new Tanto, Alto, Moco, Pleo, or some other kei car that you can only find on the road in Japan..