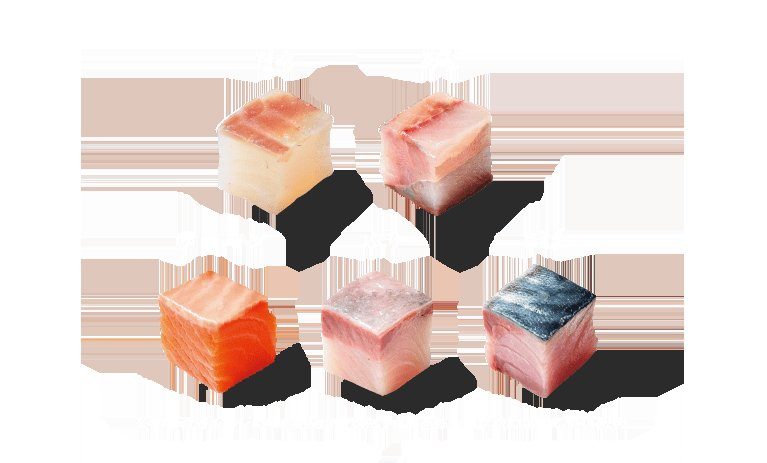 Considering the popularity of six-sided watermelon, it was only a matter of time before Japan’s key dietary staple would be transformed into a cube!

While at first glance, the headline may make you think that this piece is about some sort of scam equivalent to selling ice to Eskimos, in reality, it seems to be a true innovation from the land which introduced the world to the $200 cube-shaped watermelons.

Japanese food scientists have figured out a way to make a fish square!  It’s all in the name of helping the country’s fishermen by boosting annual consumption of fish and, of course, to make an honest buck.

This may seem odd from a country with one of the highest per capita consumption rates of fish in the world.  Japan has, however, been experiencing a steady decline in the amount of fish eaten for the past two decades.  Believe it or not, consumption of beef actually surpassed consumption of fish in Japan from 2011.

Well, one firm has made it their mission to address this situation head-on.  They seem to have struck a nerve and developed a hit product in the process.

On May 12, TopValu, the in-house brand of Japanese retailing giant Aeon Corporation, launched five types of deboned, cube-shaped frozen fish packs.  Each pack includes a dozen bite-sized cubes of fish.  Even though this meal is composed entirely of real fish, it does not look anything like the traditional image of fish.

The Japanese name of the product, Honetori (骨取り), which means “deboning,” includes the sub-title “a fish side dish that you can make with dad,” presumably implying that fathers can only prepare something simple.

The bones are removed, and the fish is then diced into 15-gram cubes.  It is battered to save time and effort in the kitchen.  The result is that the original flavor, moisture, and texture of the fish are retained after cooking.

The fish, which used to be cooked in individual pieces, can now be used in small quantities. The shape is designed to make it easier for children to eat.

We developed this product because we wanted to provide fish that is both tasty and easy to eat.  Fish can be troublesome to prepare, smells of garbage after cooking, is often difficult to eat due to the bones, and deteriorates quickly.

Dr. Amano and his team also considered how best to handle deboned fish.  In true Japanese fashion, they applied kaizen (改善) principles to improve the process.  He continued,

When selling fish fillets that have been deboned, it is difficult to cut them into pieces of the same weight, and there is always a portion that is discarded.  Thus, we thought that a cube-shaped product would be suitable, which led to the development of this product. We chose the cube shape because it has the merit of efficiently cutting the fish so that it can be used without waste.  This shape also happens to be just the right size for cooking without defrosting.

How is it made?

Boned fish are piled up, placed in a square frame, and frozen under pressure. No binding agents are used. The thickness of the fish varies depending on the type of fish, but the layers are stacked little by little, with no gaps between them. The fish is then cut into cubes while still frozen. It is subsequently floured and made into the finished product.

What do consumers think?

Because the fish is deboned and can be eaten in a single bite, people who do not like the shape of fish or its bones can still enjoy this meal.  It is also convenient for those who prefer to cook fish by the slice, as individual pieces can be cooked separately.  Thus, it is perfect for preparing small quantities for lunch boxes too.

It can, moreover, be cooked in a frying pan without thawing.

While sushi chefs may scoff, the initial reaction from the marketplace has been positive thus far.

This is a quick and easy fish side dish from TopValu that’s been getting a lot of attention. It’s good. It’s convenient, but you need to add a lot of water when stewing it because it’s well-battered. It’s better for meunière or stir-fry.

TopValu’s fish cubes are a hot topic these days.  Their new ‘Quick and Easy Fish Side Dish’ comes in many varieties, including mackerel and salmon.  There are no bones, and they can be frozen for long-term storage.  I’m curious about this revolutionary Top Value development!  Mackerel is now ratatouille!

While fish have been a staple of the Japanese diet since ancient times, the old saying “necessity is the mother of invention” has certainly proved true in this case.  Modern food scientists have actually found an ingenious way to improve the Japanese diet’s permanent fixture without compromising taste.  It makes you wonder what will be transformed into a cube next!