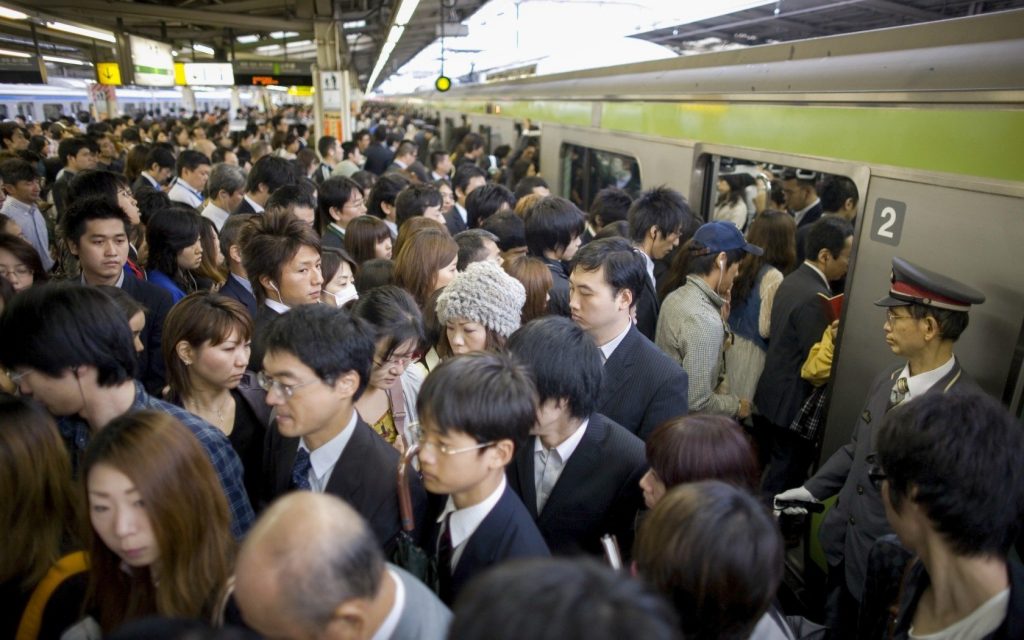 Check out the top 4 most complex and confusing train stations according to Japanese people themselves! Good luck not getting lost in the sea of railways!

When thinking of Tokyo, one of the first things people think of besides the amazing food, beautiful temples, and futuristic neon lights, is the sheer amount of people.  In other words, how crowded it is.

Considering that Tokyo is the biggest city in the world with over 37 million residents in the greater Tokyo Metropolitan Area, it isn’t surprising that “crowded” would come to mind.  Even those who haven’t visited and gotten to experience a scramble crossing first hand have most likely seen a video or two of what rush hour can look like on a Tokyo train station platform.  I’m talking of course of the videos that show train station staff pushing crowds of people into already overflowing trains.

As you could imagine, a city of over 37 million people needs ways to move 37 million people.  Apart from what seems to be millions of bus stops that dot the streets and highways of Tokyo, the city is also home to the world’s biggest railway system.  For reference, take a look at the map of Tokyo’s train system below.

Train transportation in the Greater Tokyo Area takes place via the 158 different train lines that have trains stopping at over 2,200 stations, and that doesn’t include the Shinkansen or bullet train services.  Tokyo’s railways consist of regular trains that run on the ground, subways that run underground, and monorails that run above ground.  Just in the Tokyo Metropolitan area alone there are 882 stations!

While you may be thinking “how can they even do that?”, you’re probably forgetting that this is Japan we’re talking about.  What I mean is that the system works.  In fact, it even works so well that train operating companies will literally make apology statements for leaving train stations seconds early.  Yes, you read that right, early, not late.

This being said, navigating your way around can be overwhelming, especially if you’re a tourist or don’t speak Japanese.  If you’ve ever taken a train during rush hour in Tokyo, or even just tried to get around, you know what I’m talking about.

Ikebukuro Station is the second busiest station in Japan second only to Shinjuku station (number 2 on this list).  Ikebukuro station has 2.71 million people pass through daily.  On top of this, there are 8 different train lines that stop here, meaning 8 different tracks that wrap around 4 island platforms with two sides for just the JR Lines.  Combining the Tokyo Metro, Seibu, and Tobu railways, there are a total of 26 platforms.

Like many stations in Japan, there are north, east, south, and western sections and exits.  What can make the process of commuting through Ikebukuro so complicated is the fact that the Seibu Line, whose name is written in Japanese with the kanji symbol for “west” is in the east section of the station, and the Tobu Line, whose name is written with the kanji symbol for “east,” is located, you guessed it, on the west side.

Furthermore, survey respondents claim that the underground system that houses the 3 Tokyo Metro subway lines that pass through is so complicated that it makes changing train lines really difficult, especially during rush hour.

In third place is Tokyo Station.  Another major station that sees many commuters each morning and evening, Tokyo station is the fifth busiest in terms of passengers coming through, but the busiest in terms of the number of trains that arrive and depart.  Around 4,000 trains on average pass through the station every day.

The station is divided into the Marunouchi western side and the Yaesu eastern side.  It also connects to Otemachi station, another major commuter station via an underground passageway.  Further, it’s possible to walk up to 2km (1.2 miles) underground in more passageways linking it to 5 more separate stations.  See why it’s complicated yet?  And we’re only on number 3!

Second is the famous Shinjuku station, the busiest station in the world.  Shinjuku sees almost 3.6 million people pass through daily.  Good luck trying to transfer trains here (trust me, I’ve been there) because there are 53 total platforms across the 12 train lines.  Also, there are 200 different exits, so good luck trying to negotiate a place to meet a friend who’s never been there.

Survey respondents note Shinjuku stations have complicated corridors that lead to all the different platforms.  Many also say the amount of exits causes them to often end up at the wrong place.

Despite not being the busiest station, Shibuya Station was ranked as the most complicated station to switch trains and navigate through.  Shibuya Station sees 2.4 million people pass through daily and is an extremely popular station as Shibuya is an entertainment district with lots of shopping, restaurants, bars, and nightclubs.  Shibuya Station has 9 train lines and a total of 14 platforms.

If you’ve ever heard of the Shibuya Scramble, it’s right outside the station near the famous Hachiko exit.  Hachiko is the name of a dog who used to wait for its owner daily outside of the station and is now honored with a statue.

While it may not seem as big in relation to the other stations, the reason it was ranked as the most complicated is because of the recent renovations that have been taking place.  It seems as if Shibuya station has had parts under construction forever.

Being one of the most popular entertainment districts, over the last couple of decades, Shibuya has consistently been renovated to attach shopping malls, restaurants, and other commercial facilities to the station.  I’ll admit, the construction did often make it difficult to get around as you’d have to take large detours or show up one day to find out a different portion had been partially blocked off.

Next time you visit one of these stations, be prepared to be amazed, and maybe get lost!  Good luck!