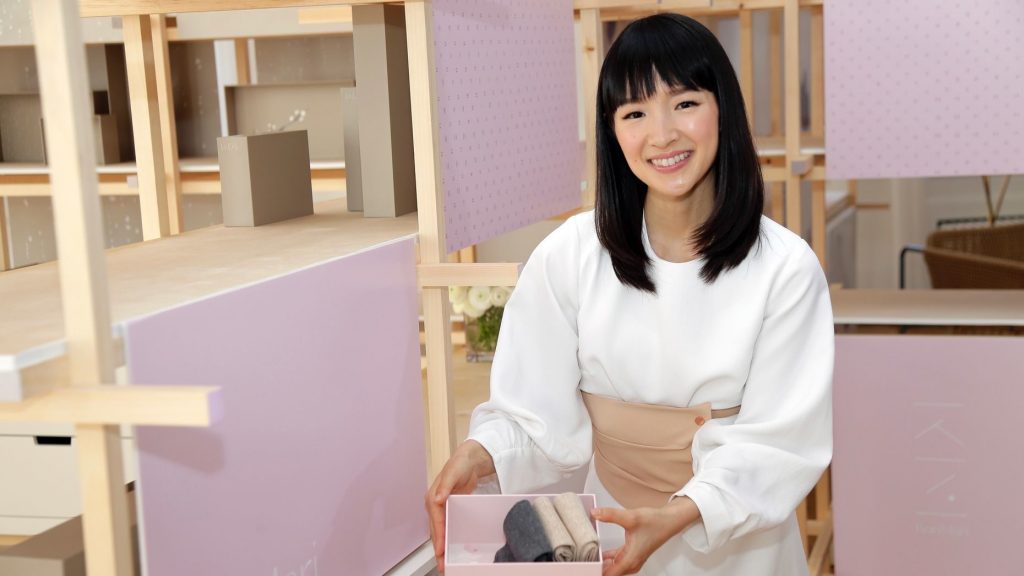 Marie Kondo: A Much-Needed Salve, or a Fleeting Fix?

The book Tidying Up with Marie Kondo and its Netflix’s visual sequel have made her a household name throughout the Western world.

Enter stage right: Marie Kondo, a descendant of ancient, always-cheerful fairies, but known worldwide as the author of the incredibly popular 2011 book The Life-Changing Magic of Tidying Up. Within its pages, Kondo advises not only how to declutter a home but how, in turn, to free up space within the mind. Once space is made in mind and the heart, one can tend to any underlying issue. Because let’s face it, if you have clothes exploding from your closet onto the floor and boxes stacked in your bedroom that you still refuse to unpack after three weeks in your new apartment, there is an underlying issue.

Marie Kondo’s book and its visual sequel, Netflix’s very reality series Tidying Up with Marie Kondo, has made her a household name throughout the Western world. Millions of copies of the book have been sold internationally, and the show (in which Kondo, through the help of a very adept translator, helps Southern California families organize their cluttered homes and lives) premiered on New Years Day, 2018 (cleverly timed, what with viewers in the mood to make fresh new starts and all—well played, Netflix, well played).

Marie Kondo’s method asks that the person doing the decluttering holds an object. If the object sparks joy or tokimeki, then it may stay. If not, out it goes. They do this in a suggested order, guided by category: clothing, books, paper, komono (miscellaneous things from the kitchen, the bathroom, etc.), and, lastly, sentimental items. Everything leftover is organized to the very last Q-tip, a place for everything and everything in its place. The world had become thoroughly enchanted.

After the show’s premiere, social media posts cropped up with converts flaunting before and after photos of their now-tidied dwellings, professing their loyalty to the KonMari method (dubbed so due to the surname preceding the first in the Japanese language). Like Jennifer Garner, celebrities posted a video of her sorting through a junk drawer, asking the decluttering maven for help. Kondo was everywhere, it seemed, and she wasn’t going anywhere anytime soon.

Why, though, did the Kondo wave wash over American audiences so deeply and so widely? And, one wonders, what will happen when it finally recedes—if it ever does?

While Japan’s citizens have, for decades, cleverly made use of smaller spaces and housing thanks to the country’s mountainous landscape and concentrated populations in lower, flatter areas, their American counterparts have been enjoying oversized, spread-out houses in a suburban paradise, free to collect anything they could afford (or not afford). Especially in our current world of fast-fashion, online shopping, and quick, free shipping, gathering limited or single-use items has been more convenient than ever—and we have the space to store them in for as long as we like, letting them gather dust until they’re pitched, sent to a landfill.

But maybe, just maybe, Marie Kondo is changing that habit. Americans may have begun to recognize that the clutter and disarray in their homes are symptoms of deeper problems they’re determined to solve.

It’s certainly evident in the families’ responses in Tidying Up with Marie Kondo that her method has produced positive impacts. A widow was finally able to sort through her husband’s belongings, cathartically letting go of his familiar button-ups while holding onto what still brought sentimental comfort. A couple who couldn’t agree on how to organize their new apartment finally found common ground through the KonMari method, bringing them closer together and allowing them to enjoy one another in the next stage of their uncluttered life. People around the world have, undoubtedly, felt the life-changing effect of Kondo’s methods.

But will the KonMari method of tidying up our rooms and our lives stick? Or, like any other fad, is it a band-aid that will begin to peel away over time, only to be discarded once it no longer sparks joy?

I stare at the overstuffed closet at my closet and decide to find out.