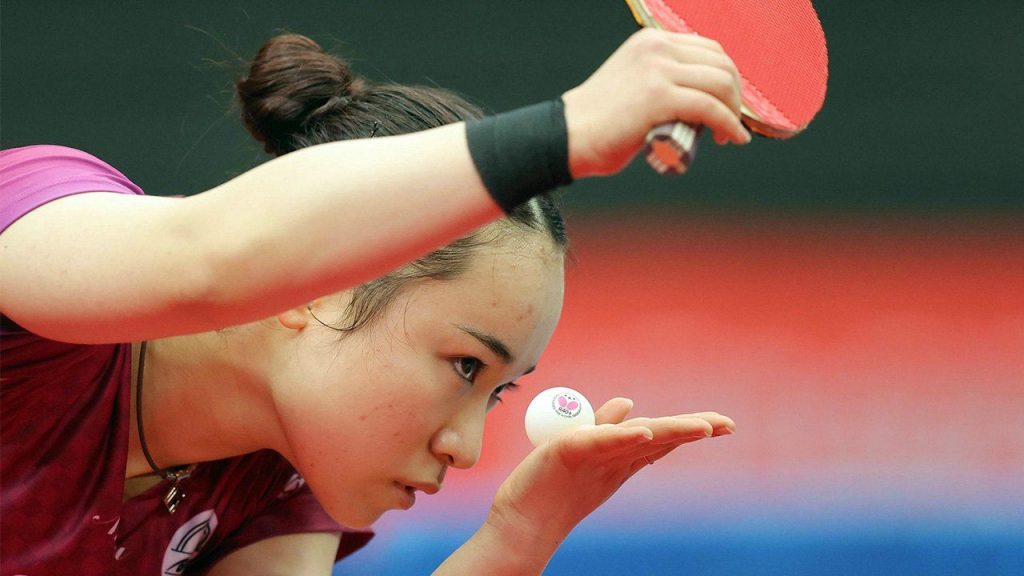 Despite her 1.5m (5’ 0”) stature, gold medal winner Ito often confuses her opponents and is determined to beat her rivals from long-dominant China.

Thus far, Japan has earned an impressive number of gold, silver, and bronze medals at Tokyo 2020.  The historic medal haul is keeping television ratings high. While some of the new, more exotic sports like skateboarding and rock climbing capture attention, national favorites such as judo and table tennis continue to dominate prime time.  Like how American audiences kept track of every twist and turn of the story of gymnast Simone Biles, Japanese viewers pay special attention to certain well-known athlete celebrities such as table tennis star Mima Ito (伊藤美誠), who is currently ranked #2 globally.  Now 20, Ito has been center stage in the world of Japanese table tennis since before entering kindergarten.  She is not disappointing her fans. Together with teammate Jun Mizutani, on July 26 Ito won the gold medal in mixed doubles

…but first, a clarification…

Aren’t You Talking about Ping Pong?

No, the Olympic sport of table tennis, known as takkyu (卓球) in Japanese, is different from ping pong.  Contrary to popular opinion, the two games are, in fact, not the same.

Oh!  Why didn’t you tell me that before?  Well, now you know.

While China has long prevailed, table tennis remains intensely popular in Japan.  Beating China is considered a national imperative.  Thus, Japanese fans are extremely keen to see their favorite players go for the gold.  Ito is a strong favorite whose performance has been highly anticipated.

Anybody who has ever played a team sport with one or two stand-out players has probably realized that such talent is often sustained by parents who can be overly supportive.  Unlike the kids on the team who are just there to have a good time, these players—and their parents—are out to win.  With every successive year, this “support” tends to become even more intense.  Those parents are, after all, vicariously living out their desire to beat the competition through their own children.

While hardly unique to most Olympians, Ito certainly came from such a family.

Ito’s mother is now a coach for the Japanese national table tennis team and accompanies her daughter to every international tournament.

Ito, who won her first Olympic medal, a bronze, at the 2016 Olympics in Rio, is said to have “announced” to her parents at age 2 that she wanted to follow in their footsteps (as if she had a choice).  From that point, Ito has been trained intensively with a very strict upbringing.

Many in Japan believe that her upbringing has been too harsh.

It is said, for example, that Ito’s mother routinely had her daughter practice at least seven hours a day since kindergarten.  There are other reports that she would rap loudly on the bathroom door if her daughter was in there for more than three minutes, complaining that she must be napping.

Whether such gossip is, in fact, true is cause for speculation, but her mother did put pen to paper to document her theories of child-rearing.  When Ito was only 15, she released a best-seller called How to Realize Your Children’s Dreams:  29 Things Every Parent Should Do (Kodomo ga Yume wo Kakujitsu ni Kanaeru Hoho:  Sono Tame ni Oya ga Subeki 29 no Koto or 子供が夢を確実に叶える方法 そのために親がすべき29のこと).

Some of the advice seems quite practical.  It includes “Don’t flatter your children to develop their talents,” “The seeds of dreams are planted during pregnancy,” “Give praise only the first time, etc.”  You get the point.

There is no doubt that Ito has been conditioned both physically and mentally to be a fierce competitor.  Her method of staring down her opponents is legendary, but her slight stature can be disarming at first glance.

Despite standing only 152cm (5’ 0”), Ito intimidates opponents who are much taller.

Ito uses her petite stature as an advantage.  While she can in no way be characterized as a mouse, Ito’s small size enables her to confuse and frighten her opponents, somewhat like how a mouse can terrify an elephant.

Combined with an intense mental focus on winning, Ito rarely ever seems to relax.

While they appreciate her ferocity, one reason why Ito has so many fans in Japan is that she has had a friendship since kindergarten with a fellow player named Miu Hirano, who seems to have the exact opposite personality.

Ying and Yang of the So-Called “Miu Mima” Pair

Both from Shizuoka Prefecture near Mt. Fuji, Ito was only 4 years old when she first paired up with Miu Hirano, who had just turned 5.  The two would often play together as doubles partners.

They first played doubles together at the age of five in a tournament for second-graders and younger.  The pair later won the 2014 German Open, earning them a Guinness World Record for the youngest combined age (27 years, 145 days).  Now they are competing together at the Olympics.

These childhood friends—and occasional rivals–were dubbed “Miu Mima,” an affectionate nickname for the pair known throughout Japan.  Miu (Hirano) is known for almost never losing her cool and always smiling, whereas Mima (Ito) comes across as a little too severe at times.  Thus, their complementary demeanors make for a well-balanced pair.

Together with teammate Jun Mizutani, Ito won the gold medal in mixed doubles on July 26.  Three days later, she snagged another bronze medal in women’s singles.  Together with Miu Hirano and Kasumi Ishikawa, yesterday, Ito beat a rival team from Hong Kong to reach the semi-final of the women’s team bracket.  We wish Ito and her teammates the best of luck in the final round on August 5.