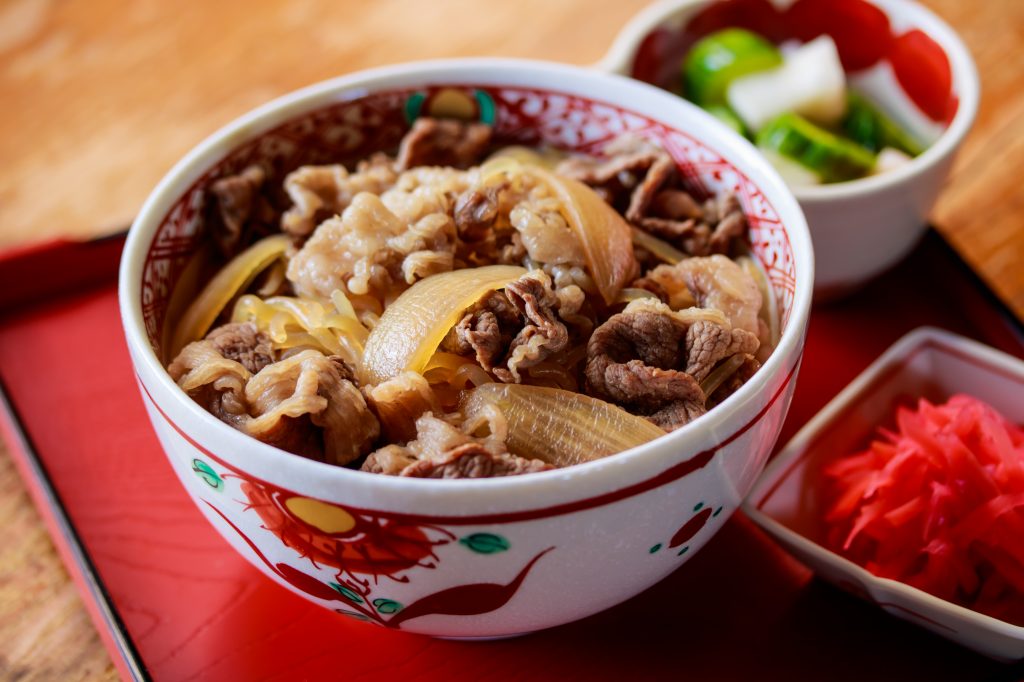 The Most Luxurious Gyudon in Tokyo

This luxurious Gyudon is priced at 5,464 yen (about 50 USD) – 10 times more costly than a standard Gyudon offered in a chain store.

In June 2019, Capitol Hotel Tokyo announced a new Gyudon menu – what could be the most expensive Gyudon in Tokyo. Priced at 5,464 yen (about 50 USD), The “Capitol Gyudon” is 10 times more costly than a regular Gyudon offered at Yoshinoya (Japanese Gyudon chain), which is considered the golden standard of Gyudon in Japan as a quick and inexpensive meal.

Gyudon (牛丼: Beef Bowl) is a widely popular Japanese quick meal, which some consider one of the essential “national foods,” such as Ramen and Soba. Gyudon is made up of a bowl of steamed rice topped with thinly sliced beef and tender onion, simmered in mildly sweet dashi (fish and seaweed stock) seasoned with soy sauce and mirin (rice wine). There are about 5,000 Gyudon chain stores across Japan, which is more than the number of McDonald’s and Starbucks in Japan combined.

ORIGAMI, a restaurant at Capitol Hotel Tokyu, spent a year and a half developing this luxurious Gyudon menu. Only two slices of premium Japanese Black Wagyu, which is a lot more expensive than the U.S. Beef Rib, are used per bowl. Also, Wagyu’s quantity for Capitol Gyudon is almost twice as much (150g) as a regular Gyudon at Yoshinoya (80g).

How Yoshinoya has Built a Gyudon Empire

Between the late 1800s and early 1900s, eating beef was becoming popular throughout Japan as a result of Westernization. Gyudon originated from another dish, Gyunabe (牛鍋), where thin slices of meat are cooked with vegetables in a pot. At some point, it was served over steamed rice in a bowl as “donburi” (rice bowl).

In 1899, the first Yoshinoya restaurant was opened in Tokyo’s Nihonbashi district. However, Gyudon did not become mainstream until Yoshinoya started opening its franchise stores in 1973. Yoshinoya’s vision was to “win over the entire Japanese market with Gyudon”. They did this by employing two highly effective strategies:

#1 Lowered the cost of their menu by using cheaper beef cuts from the U.S.
#2 Minimized risk by employing the franchise business that allowed Yoshinoya to earn enough royalty without directly owning the stores.

Yoshinoya, King of Gyudon, does not seem too happy that a newcomer from the Hotel industry is trying to mess with the “Gyudon empire.” On August 14th, Yoshinoya released a new “Sukiyaki-juu” menu, which uses 120g Sirloin, at the price of 860 yen (more than 2 times expensive than its regular beef bowl). Sukiyaki-juu gained so much traction that it sold 500,000 meals in 12 days and went out of stock…the King of Gyudon has demonstrated its unwavering hold over the Japanese market.

Where can we eat Gyudon?

Yoshinoya:
There are 200 Yoshinoya franchises in Tokyo alone – so you don’t need to try hard to find one. There was this oldest Yoshinoya, which had been running since 1959 in Tsukiji, but due to the relocation of Tsukiji fish market, it permanently closed in 2018. Yoshinoya also has a presence in other countries like U.S., China, Taiwan, Singapore, Malaysia among others.

Hope you’ll get to try both a traditional Yoshinoya Gyudon and a fancy Capitol Gyudon!