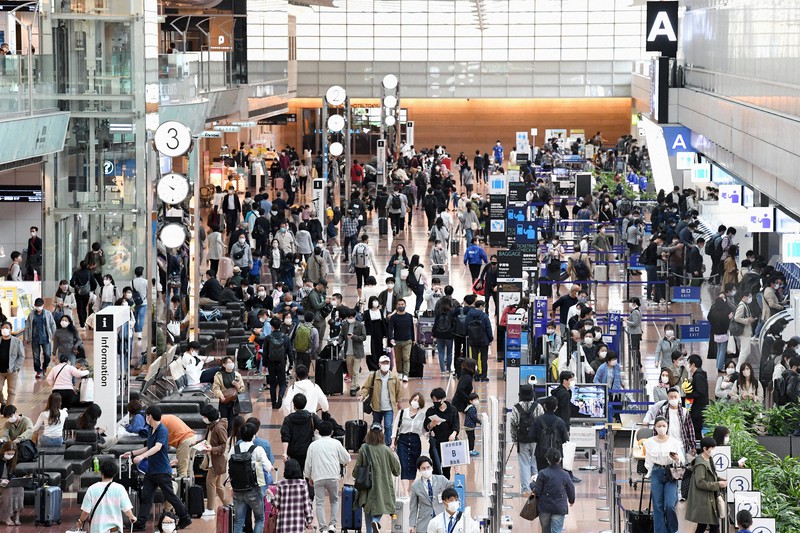 Public frustration at an all-time high in response to the government’s stricter lockdown procedures for a brief period during Japan’s Golden Week.

What is Golden Week?

For a nation that is arguably considered home to the world’s hardest-working residents who regularly work long hours, including overtime shifts, and take little days off, Golden Week is the well-deserved long “holiday” period for Japanese workers.

Made up of 4 national holidays packed into a 7 day period, Golden Week is one of the longest and busiest breaks that Japanese workers receive apart from the New Year and Obon celebrations.  Golden Week is a prime time for travel, leisure, or simple time off from work for many Japanese.

Golden Week starts at the end of April on the 29th, that is Showa Day (昭和の日), the birthday of the former Emperor Showa.  It also consists of Constitution Day (憲法記念日) on May 3rd, commemorating Japan’s postwar constitution of 1947, Greenery Day (緑の日), dedicated to the environment on May 4th, and lastly Children’s Day (こどもの日) on May 5th, when families celebrate the future success of their son’s, hanging up carp windsocks or koinobori, and display traditional samurai dolls. While Children’s Day commemorates boys, Hina Matsuri (ひな祭り) or the Doll Festival celebrates the future success of daughters on March 3rd.

Why are Japanese People Frustrated?

This year for Golden Week 2021, to limit the spread of COVID-19, the Japanese government declared an emergency and a resulting lockdown for 4 prefectures, including Tokyo, Osaka, Hyogo, and Kyoto, as the number of cases has been rapidly increasing in the past weeks in these locations.  The measures were put in place to prevent people from going out and traveling from these COVID “hotspot” locations to less affected regions across the country.

The government has also banned the sale of alcohol at restaurants and bars and canceled the admission of fans to sporting events.  Further, the government declared they would provide 500 billion yen (4,600,000 USD) to aid businesses hurt by the order.

While this all may seem like the proper thing to do amid the pandemic, the Japanese are still upset with the sudden stricter orders for Golden Week for a few key reasons.  These revolve around the government’s hypocrisy of surrounding these laws as government officials have continued to be caught breaking their own rules regarding lockdown procedures, their willingness to hold the postponed 2020 Olympics despite slow vaccine rollouts, and the obvious stress of having to return to lockdown.

Nonetheless, the measures taken by the government are for everyone’s own good, as the number of COVID-19 cases has been rapidly increasing in the weeks leading up to what is usually one of Japan’s busiest travel seasons.  With that said, many Japanese have expressed that the last-minute announcement of the stricter orders was evidence of the government’s poor crisis management capabilities.

The decision to ban restaurants and bars from serving alcohol was likely a good decision in limiting the spread of the virus as many of the recently infected people were in their 20’s and contact tracing processes often discovered clusters at izakayas and karaoke bars.

What is troubling and possibly also reflective of the government’s poor crisis management is that it has been reported that the downtown areas of neighboring prefectures have been flooded with Tokyo residents.  Further, some bars and restaurants have taken advantage of the last-minute decisions by finding loopholes that could have been accounted for with greater planning as they have been allowing customers to bring their own alcohol into the venues.

What Role Does the Olympics Play?

Japan’s decision to go through with the Olympics this summer despite extremely slow vaccine rollouts has played a large role in frustrating the public.  Many feel as if it is unfair for the government to order people not to gather in large groups as they continue to proceed with the Olympic torch relay across the country, drawing large crowds.

In addition, the public is upset that there will be 500 nurses that will be relocated to serve in the Olympics even though the hospitals across the country are overwhelmed with the number of patients being treated.

One of the biggest factors that has outraged the public is the government’s orders to restrain them from gathering in groups to eat or drink until they are vaccinated.  This is problematic in the eyes of the public for two reasons.

First, vaccine distribution in Japan has been extremely slow compared to other countries across the globe as they have not even finished vaccinating medical professionals yet.  Secondly and more importantly, the Japanese public is furious that government officials have not been obeying their own rules. Many have continued to be caught dining, drinking, and partying well past 8 or 9 pm, when venues are meant to close, in large groups of people.

Thus, it is understandable why the public may feel frustrated by being told what they can and can’t do when they feel they are the one’s actually taking proper measures to prevent spreading the virus from wearing masks, washing their hands, and using hand sanitizer, and of course, staying at home and limiting the amount of time spent in public, especially in large groups.

What Does this Mean for Golden Week?

It has been speculated that because the pandemic and the anxieties that come with it are not “new” anymore, that people will want to travel for Golden Week, especially if they did not last year because of their fear of bringing the virus to their hometowns where their parents live, for example.

While the number of people traveling is lower than pre-pandemic times, there are significantly higher rates of travel during this year’s Golden Week than last year, during the early stages of the pandemic based on the number of booked airline tickets and bullet train seats.

This may point to the idea the government’s last-minute call for a stricter lockdown in the four prefectures with rapidly increasing rates of faster spreading variants of COVID-19 may actually backfire as more people will travel, potentially bringing the virus with them. More people will venture out of their prefectures to find bars and restaurants that are open later and serving alcohol.

A key thing to note is that while many Japanese are in fact frustrated with the government’s actions, most do understand that the stricter “stay-at-home” and lockdown procedures are necessary to prevent the spread of COVID-19, and especially the more easily transmissible variants of it that have been circulating at rapid rates in cities like Osaka.  As a result, many people are obeying these measures and staying at home for a quieter than usual Golden Week in 2021.

Hopefully, we don’t see another spike in cases across the country after Golden Week.  In an ideal world, everyone would obey the rules and play their part in stopping the spread of the virus, and while many are, some are not.

Record numbers of vacant homes are now available either for purchase or rent both in the countryside and in the big cities.
June 17, 2021

Considering the popularity of six-sided watermelon, it was only a matter of time before Japan’s key dietary staple would be transformed into…
June 9, 2021

Check out the “ancient ruins” that has become a new cosplay hotspot for photoshoots.
May 22, 2021