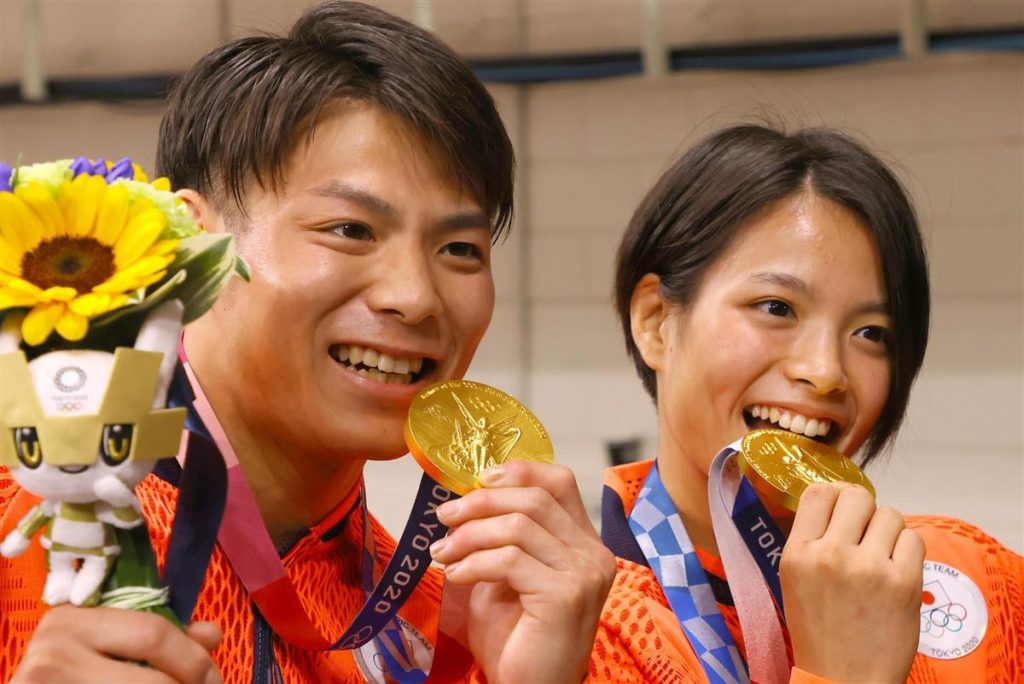 As Japanese athletes keep racking up medals, support for the Games in Japan is on the rise–with some reservations.

Just as the historic Tokyo 1964 Olympics signaled Japan’s return to the world scene in the midst of rapid recovery following World War II, Tokyo 2020 was originally sold to both the International Olympic Committee (IOC) and the Japanese public as a milestone event to mark the recovery from the so-called “Triple Disaster” of March 11, 2011. On that fateful day, Japan simultaneously experienced the strongest recorded earthquake in its history, a huge tsunami that claimed 20,000 lives, and a meltdown to the Fukushima nuclear power plant.

It has certainly been a bumpy road for Japan leading up to last Friday’s subdued Opening Ceremony.  Especially as the coronavirus continues to spread across the country amidst a comparatively slow vaccine roll-out, public sentiment was not looking good.  As recently as July 19, Japan’s Asahi Shinbun newspaper reported the results of a telephone survey conducted during the previous two days, which indicated that only 1 in 3 Japanese were supportive of holding the Games.  These results reflected a public fatigued from battling the coronavirus.

Despite the negative sentiment, the uplifting Opening Ceremony proved to be an inflection point from which the bias against the Games started to evaporate.

What caused this dramatic change?

It was, most likely, the pride that the Japanese feel as they watch their fellow citizens rake in an impressive haul of gold, silver, and bronze medals.

Summing up the attitude of a nation which had been in a funk for a long time, Tonoya tweeted,

Thanks to the Olympics, I’m glad to hear a lot of upbeat news for the first time in a while. It’s fun watching TV.

Stories of inspirational “comebacks” and the remarkable achievements of Japan’s next generation of superstar athletes—especially in some of the newest sports like skateboarding and surfing—are helping to win over the hearts and minds of many in Japan.

There is, however, still quite a bit of concern about the potential for Tokyo 2020 to turn into a super-spreader event to end all super-spreader events that could result in more deaths and overwhelm Japan’s already stressed medical infrastructure.  Thus, public opinion is still fairly mixed, but lately, it has been trending more in favor of the Games.

On Twitter, the Japanese hashtag “It was good to host the Olympics” (#オリンピック開催して良かった) has been trending since the Opening Ceremony.

The Olympics have, however, always had their detractors.

As if the potential health risks from moving forward with Tokyo 2020 in the middle of a global pandemic were not enough, allegations of corruption, sexual harassment, misogynistic management, an alleged rape in the main stadium just before the official start of the Games, embarrassing scandals which resulted in the last-minute sacking of high-profile local figures in leadership roles, and cost overruns have tainted the Olympics for many Japanese.

Much of the lingering negative publicity is due to dissatisfaction with how the Games have been managed.  IOC President Thomas Bach, who is an intensely unpopular figure in Japan, has, in particular, not made a good impression. To many, he personifies how the IOC has been hell-bent on holding the Olympics no matter what the potential human cost.

Bach began his visit to the country in mid-July with an embarrassing gaffe by mistakenly referring to Japan as China.  False promises that the Olympics would not endanger the local population have fallen on deaf ears.  His exceedingly long speech during the Opening Ceremony certainly did not garner support, as well.

Thus, there still seems to be a significant degree of discontent just below the surface.

I feel absolutely no hope for the Tokyo Olympics. The waste of budget has been exposed, plus the massive waste of lunch boxes. I can’t help but think that they are making fun of the people who have been impoverished by the corona disaster. Also, please think about the medical workers who can’t take a break. Above all, don’t forget that we are losing to Corona.

Despite the athletes’ impressive performance and heart-warming personal stories, it would not take much to sway overall public opinion back toward antipathy for the Games.

As the old saying “It’s not over ‘till it’s over” goes, public opinion can be notoriously fickle.

The vaccine roll-out has been slow. Now the Delta variant is accelerating the 5th wave of the coronavirus. Daily tallies of rapidly rising numbers of infections, hospitalizations, and deaths continue to grab the headlines. It just does not seem prudent to be holding the Olympics in the middle of this developing crisis. Thus, public opinion about the Games could take a turn for the worse.

One person who is probably counting heavily on the growing support for the Games is embattled Japanese Prime Minister Yoshihide Suga, whose political future is inextricably tied to the success—or potential failure—of the Olympics.

No matter what the final referendum turns out to be for Tokyo 2020, Japan’s experience of holding the Olympics in the midst of a global pandemic will certainly provide valuable lessons learned for future venues.  Don’t hold out much hope that such schooling will stick, as it seems that the host nations typically make the same mistakes over and over again during every four-year Olympic cycle.