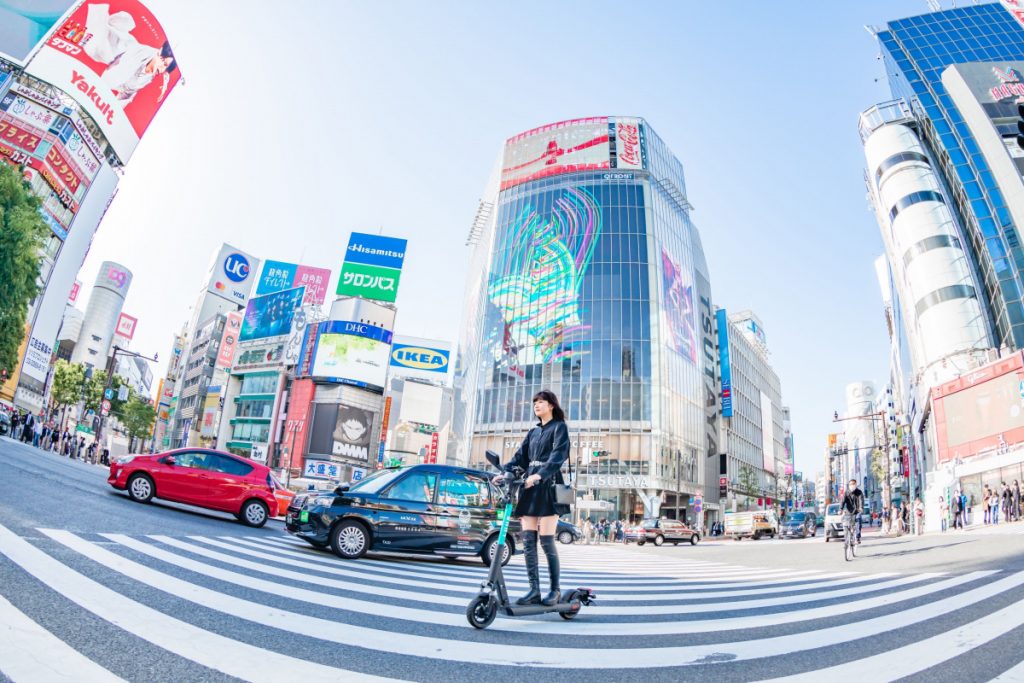 Recently relaxed traffic regulations are paving the way for an e-scooter rental market in selected areas of Tokyo and Fukuoka.

Despite being an early innovator in the world of Mobility as a Service (MaaS) with the famous bullet train, generally conservative Japan has been a little slow to jump on the e-scooter bandwagon. With recently relaxed traffic regulations in selected areas, which are enabling the development of rental services for e-scooters, which are called dendo kikkubodo (電動キックボード) in Japanese, a term that literally means “electric kickboard,” that is about to change. Success by early adopters in Tokyo and Fukuoka should make it possible for Japan to become a “fast follower” in this exciting niche market to help riders get from Point A to Point B.

What is an e-scooter?

Beginning around 2017 in selected, overseas markets, the e-scooter rapidly gained popularity as a convenient, easy-to-use, and environmentally-friendly means for covering “the last mile.”  The e-scooter is a “micro-mobility device” vehicle that can reach speeds of about 20 kilometers per hour and can be ridden while standing.  According to Japanese traffic rules, it falls under the special category of kogata tokushu jidosha (小型特殊自動車) in Japanese.

E-scooters are as “easy as 1-2-3” to ride, according to the website of e-scooter start-up mobby in Fukuoka.  First, place one foot on the step and then kick the ground with the other foot.  Once stable, press the accelerator to accelerate. When you want to stop, use the brake lever.

Well, that does sound pretty simple!

Will e-scooters replace the bicycle?

The bicycle is indeed the closest vehicle to an e-scooter in terms of speed, but there are clear differences between the two.  One is the distance traveled.  Also, e-scooters do not have seats, so people wearing suits and skirts can easily ride them. They are, however, not suitable for traveling long distances because you need to stand up while moving.

The e-scooter is the most suitable mobility for traveling a distance of 1 to 2 kilometers, about a 15-minute walk. On the other hand, bicycles have seats, so they are probably more suitable for traveling longer distances than e-scooters.

One problem with bicycles in Japan’s large urban centers is, though, finding a place to park.  Okai expanded,

E-scooters take up less space than bicycles, making it possible to install more of them in a smaller space. This means that e-scooters can be an efficient form of mobility for landowners who want to install them. Especially in Japan, where space is limited, and the cost of real estate demands a high premium, the size of the parking lot is critically important.

Thus Okai and fellow entrepreneurs are attempting to carve out a new niche market.  He concluded,

Rather than thinking that e-scooters are superior to bicycles, I think it is important to distinguish between the two based on their respective characteristics.

By now I bet that you want to try riding an e-scooter, right?

Now Available to Rent in Japan

Well, at the end of April traffic regulations were relaxed in limited areas—at least for a trial period—to embolden the two start-up rental services Luup and mobby to start offering a limited number of rental e-scooters in Tokyo and Fukuoka.

Luup, which also rents electric-assist bicycles, received the go-ahead to operate an e-scooter rental business in three areas in central Tokyo, including Shibuya, Shinjuku, and Roppongi.  (At the moment, they have started only in Shibuya.)  The firm is also planning to begin to offer e-scooter rental in two locations in Osaka, Minami, and Kita, very soon.

A similar service called mobby just started on a trial basis in Fukuoka.  From May 10, mobby “rolled out” its fleet of approximately 100 e-scooters in the central Tenjin District of Fukuoka.  If all goes well, then mobby will provide more e-scooters and place more rental stations around the city.

Other new market entrants include WIND（ウィンド）ema（エマ）, although they still seem to be getting organized.

How do you get “a ticket to ride?”

According to mobby’s website, there are four quick steps to get started.

The process is similar for Luup, although Luup relies upon a dedicated app.

How much does it cost to rent?

Both services charge the fees to a credit card which must be registered in advance.

How far can you ride?

While the actual range depends upon the driver’s weight, local topography, and traffic conditions, the manufacturer lists the range at approximately 22 km.

Where can you ride?

At present government authorities have restricted the area where you can ride a rental e-scooter.  The most basic guidelines limit you to smaller roads, but each rental service provides details online.

Check out Japan Insider’s own Yasu and Julian as they take a ride through Shibuya.

With a rental e-scooter, there is, however, no need to return your e-scooter to the same place where you rented it, as there are plenty of other rental stations or “ports” around town.  This practice is called norisute (乗り捨て) in Japanese.

In Fukuoka mobby specifies that users are not allowed to ride on sidewalks.  There are, moreover, some restricted areas including within Fukuoka’s famous Ogori Park.

Also, be careful not to park in “no parking zones,” as both rental services are very clear that it is the driver who will be fined in such a case.

Do you need to wear a helmet?

While not required, wearing a helmet is highly recommended.

Are there any other requirements?

E-scooters are classified as special small cars or kogata tokushu jidosha (小型特殊自動車) in Japanese. You need to register your driver’s license in advance with both Luup and mobby. It is important to refresh your understanding of the rules of road prior to getting on an e-scooter.

As e-scooters fall into a different category from mopeds or gentsuki (原付) in Japanese, a surprising rule of the road which is allowed for e-scooters is the ability to traverse the middle of an intersection when making a right turn. Where marked mopeds are expected first to cross all the way to the other side of the street and then make a 90 degree right turn (see diagram for more details).

What if I get into an accident?

Move the e-scooter to a safe place—if you can, call 110 to reach the police, and report the details to the rental agency.

How much does it cost to purchase one?

Opportunity to Earn Some Extra Bucks

You may be able to make money from renting out space for parking.  Luup is actively seeking to expand its network of dedicated parking spaces, which they call “ports.”

If you have a little extra “dead space” and would like to make a few extra bucks, you may be able to partner with Luup “to install your own port.”  It does not take much space.  Contact Luup to find out how much you will be paid.

Helping to Reduce the Cost of the “Last Mile”

E-scooters are certainly a good fit for recreation, but it is possible that their real value will be as a solution for transportation services in geographies that are becoming unprofitable and difficult to continue to service in Japan.

The overwhelming weakness of “micro-mobility” in Japan is transporting goods to places far from train stations. It is simply cost-prohibitive. In Southeast Asian countries, motorcycles and scooters are in circulation. In China, there are so many bicycles that a business can be established where a 400 yen ($3.67) coffee can be delivered for only 50 yen (46 cents). Delivery services such as UberEats in Japan cost significantly more than that. Other ‘C to C services’ with a high unit price, such as tutoring and housekeeping services, can often be provided in places far from train stations, but on-site services such as nursing care with a low unit price are unprofitable when transportation costs are included. Thus, e-scooters may provide more of an economical solution.

Time will tell if e-scooters will catch on in Japan, but I for one have certainly been inspired to go for a ride!