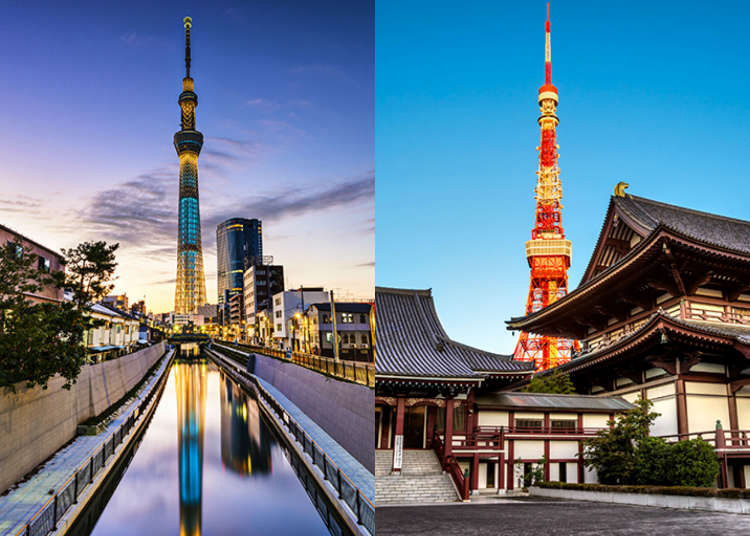 Do you consider Tokyo Tower or the Tokyo Skytree to be Tokyo’s landmark? A new survey revealed a change in responses at the age of 30.

Like the Eiffel Tower in Paris, Big Ben in London, or the Statue of Liberty in New York, every city has its landmark, icon, or symbol.  If you live in Tokyo and are asked about icons to represent the city, you might say Tokyo Tower, or if you’re under the age of 30, you might say Skytree.

The reason I say “under the age of 30” is because an interesting new survey in Tokyo revealed that there is a clear divide in responses to the question “Do you consider Tokyo Tower an icon of Tokyo or the Skytree?”.  People up to the age of 30 generally consider the Skytree as an icon for Tokyo, while people above the age of 30 consider it to be Tokyo Tower.

To explain this, let’s look into both towers.

The History of Tokyo Tower

Tokyo Tower is a communications and observation tower open to the public in the Shiba-Koen district of Tokyo.  The Tokyo Tower stands 332.9 meters tall, or 1,092.2 feet tall.  The orange and white landmark’s design was inspired by the Eiffel Tower in Paris.

The tower generates income through tourism and antenna leasing.  Tourists can travel up to the observation deck to get an amazing view of the city and indulge in the various cafes and restaurants located at the bottom.  Large broadcasting corporations like NHK, TBS, and Fuji TV utilize its transmission antennas.

Tokyo Tower has become an iconic piece of architecture in the city and appears in many depictions of the city, from television and films to books and animation.

The key to explaining the sudden change when considering Tokyo Tower as the main landmark of Tokyo is the age difference of the survey participants and the age of the towers.

The History of Tokyo Skytree

Tokyo Skytree, completed in 2012 after 4 years, is currently the tallest tower in the world and the second tallest structure in the world behind the Burj Khalifa in Dubai.  Located in Sumita, the broadcasting and observation tower stands at 634 meters or 2,080 feet tall.

The Skytree is an almost silverish tone of white and is often illuminated with all kinds of bright colors.  In comparison to the Tokyo Tower, Skytree has a more modern, futuristic look.

Now that we know about the towers, let’s get into the fun (boring) stuff—the survey results.

First up is the teenagers.  62% of teenage boys and 60% of girls see Skytree as the main icon.  The majority of people in their 20’s also consider Skytree as the landmark of the city, but the difference is not as large as the teens.

Once we hit the 30-40 age range, we begin to notice trends.  Only 38% of men and 34% of women thought Skytree was the landmark, stating that it would be Tokyo Tower instead.  Further, most 40-50 year-olds still consider the Tokyo landmark to be Tokyo Tower.

Those who are in their 20’s today had to be around 10-14 years old back when Skytree was being built and when it was completed.  Thus, the constant news updates on its construction and large opening ceremony would be heavily implemented in their minds.  Not to mention, the Skytree receiving the record for being the tallest tower on earth likely spawns some pride surrounding the tower and the city of Tokyo.

Most of those above the age of 30 grew up with Tokyo Tower as it was around before they were even born, allowing them to reminisce of the times they gazed upon it throughout the years.

What Do Tokyo Residents Really Think?

One respondent interestingly noted that the Tokyo Tower gives off a sense of melancholy and emotion that retains the image of the Showa period (1926-1989) while the brand new Skytree does not.

Like a fine wine, for those who grew up with views of the Tokyo Tower and memories of the Showa period, Tokyo Tower seems to have a place in their hearts as the aged tower emits emotions and memories.

On the other hand, the younger generations will begin to feel the same way about the Skytree later in life.  Who knows, maybe Tokyo will decide to build something taller than the Burj Khalifa soon!