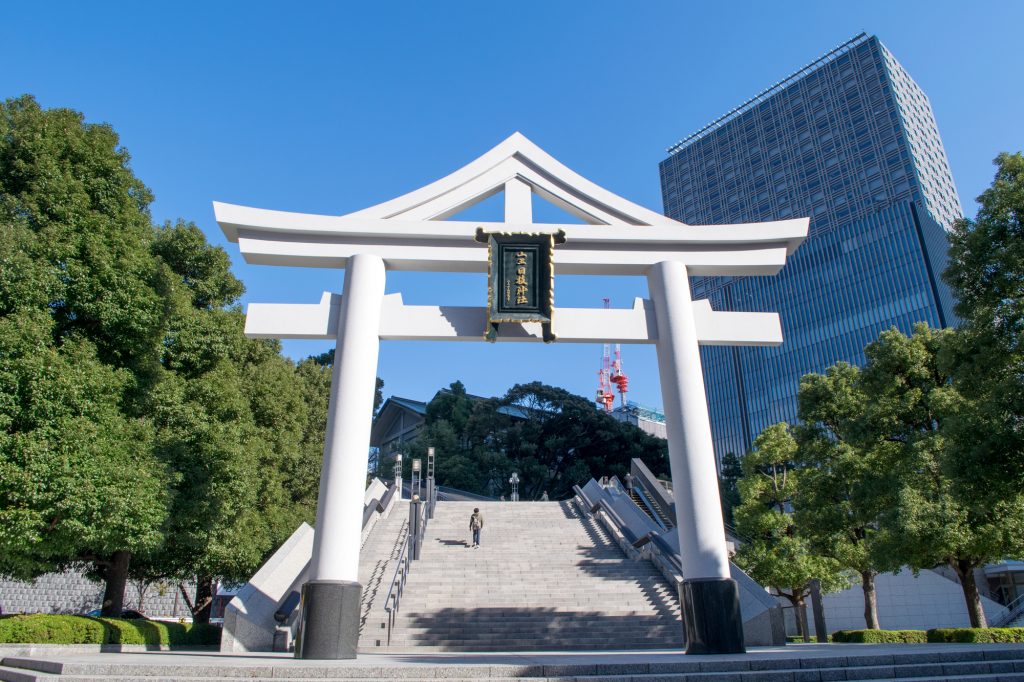 ShareTweet0 Shares Top 10 Shrines in Tokyo is a difficult list to make, but we did it anyway and visited ALL of them to capture their beauty and unique features.…
September 19, 2020
Share
Tweet
0 Shares

Top 10 Shrines in Tokyo is a difficult list to make, but we did it anyway and visited ALL of them to capture their beauty and unique features. Obviously, everyone has their own personal favorites, but we hope this serves as a guideline for your next trip to Tokyo! In the meantime, you can join us on our virtual tour.

It is said that as many as 1,500 Shinto Shines exist in Tokyo, the heart of Japan. While choosing only ten from around 1,500 shrines is a nearly impossible task, we selected our Top 10 Shrines in Tokyo by taking into consideration the followings:

Suiten-gu is known for being the home of Suiten, a god that can bestow easy childbirth upon those who pray at the shrine. Although located in Tokyo, Suiten-gu shrine is a branch of the Kurume Suiten-gu Shrine, over 500 miles away, in Fukuoka prefecture. It was originally constructed in the Mita area of Tokyo in 1818 but was then moved to its current location in 1872.

The original Suiten-gu Shrine was founded in 1185, after the defeat of the Heike clan at the battle of Dan-no-ura. It was built to pray for the souls of emperor Antoku and his mother, who took their own lives after the defeat but jumping into the ocean. Lost with their bodies under waves, was a sacred sword, which was one of three imperial treasures that symbolize the legitimacy of the throne.

Since then, the shrine has been worshiped for easy childbirth and the prosperity of descendants. It often becomes very crowded, especially with many women praying for their unborn children and coming to receive an amulet of blessing on Inu-no-hi, or day of the dog, as dogs are often blessed with large litters of puppies.

Tomioka Hachiman Shrine is the largest of many Hachiman Shrines in Tokyo. The shrine is dedicated to Hachiman, the God of war and archery, and the divine protector of Japan.

The shrine was constructed in 1627, and also contains 17 smaller shrines to various deities such as the Gods of sumo wrestling, travel, and prosperity. In fact, Tomioka Hachiman Shrine is the birthplace of a form of sumo known as Kanjin-zumo, in which modern-day sumo gets its origins.

Numerous monuments to sumo wrestlers can be found on the premises along with their inscribed names, which display the history of sumo. The Fukugawa Hachiman Festival features over 54 different mikoshi shrines and is one of the three largest religious festivals in Tokyo.

Dating back to the year 1005, Shiba Daijingu is a branch of the Grand Shrine of Ise. It is dedicated to the deities Amaterasu-Omikami, the sun goddess, and Toyoukeno-Okami, the god of agriculture and industry.

Shiba Daijingu is also home to the longest festival in Japan, the Dara Dara Matsuri (だらだら祭り) that lasts for 11 whole days. It got its name from the Japanese word daradara, that is used when describing something that goes by slowly, like だらだら寝る, meaning to sleep-in for an unnecessarily long time.

Despite it’s smaller size, the shrine is a popular wedding spot and listed as one of the Tokyo Jussha (東京十社), a group of 10 shrines that maintain peace and safety of the Tokyo area.

Tokyo Daijingu is sometimes referred to as “O-Ise-Sama in Tokyo,” referencing the Grand Shrine of Ise in Mie prefecture. During the Edo period, many people needed to make a pilgrimage all the way to the Grand Shrine of Ise to worship powerful deities like Amaterasu-Sume-Ohkami, the ancestral god of the imperial family and highest-ranking god in Shinto.

This shrine was originally named Hibiya Daijingu based on the area it was built on, but after the Great Kanto Earthquake in 1923, it was moved to Iidabashi and renamed Iidabashi Daijingu. After the second world war, it changed its name again to the current Tokyo Daijingu.

It’s also known for being the first shrine to have established the Shinto wedding ceremony, which is nowadays widely performed throughout the country. That makes this shrine a popular praying spot for all things love-related. Many come here to purchase lucky omamori charms in the hope of improving their relationships.

Hakusan Shrine was established in the year 948 and is a branch of the Shirayamahime Shrine that worships Mt. Hakusan in Ishikawa Prefecture. It was moved to its current location in 1655. People are known to pray at this shrine for marriage as well as, oddly enough, toothaches.

According to legend, an empress long ago got rid of her toothache after coming to this shrine, but this is just one of many unfounded stories. Others say that the pronunciation of Hakusan in Chinese (歯苦散 is pronounced hakusan, meaning disappear tooth pain) is where the tooth relief believe comes from.

Whatever the theory, though, in the Edo period, this shrine became known for alleviating tooth pain, which in those days that was a serious issue, and it is easy to understand why people were turning to divine intervention for relief.

A stone monument was put here for Sun Yat-sen, founding father of the Republic of China. The story goes that while in Japan, he saw the comet Halley at Hakusan Shrine in 1910, and this inspired him to start the revolution in his homeland.

The origins of the Akasaka Hikawa Shrine date back all the way to 951. In 1730, the shrine was moved to its current location by order of the 8th shogun, Yoshimune Tokugawa, and it became his personal shrine. Yoshimune was famous for his modest, frugal policy, and the shrine is relatively simple-looking.

Akasaka Hikawa Shrine has miraculously remained intact despite several major natural disasters, such as the Ansei Great Earthquake (1855), the Kanto Great Earthquake (1923), and the Tokyo Air Raids of 1945. This has allowed it to retain its original features from the Edo Period. It is designated as an intangible cultural asset to the Tokyo metropolitan area.

On the same premises, you will find five smaller shrines, including the Shiawase Inari Shrine, named by the prominent figure in the late Edo period, Kaishu Katsu. There is also a notable Ginko tree that is over 25 meters tall and around 400 years old, further emphasizing the historical feel of the shrine.

The establishment of Kanda Myojin dates back to 730 AD, in the modern-day Otemachi area of Chiyoda district. Located northeast of the Edo Castle, it played an important part as the General Protector of the Edo area (present Tokyo).

Its formal name is Kanda-jinja (Kanda Shrine), but the name of Kanda Myojin has remained more familiar to the people of Tokyo to this day. At present, Kanda Myojin is the main protective shrine of 108 different towns, including Akihabara, the world-famous nerd haven; Otemachi and Marunouchi, Tokyo’s key, central business areas; as well as Kanda and Nihonbashi, the original downtown areas during the Edo period.

It is usually crowded with visitors from many companies wishing for the prosperity of their businesses. One of the main deities enshrined here is Taira no Masakado. He is known as the god of victory for once conquering the Kanto region.

Nezu Shrine was relocated to Nezu in 1706 by Tokugawa Tsunayoshi, the fifth shōgun of the Tokugawa dynasty, and it is one of the oldest religious sites in Tokyo. Many buildings on the site grounds have remained intact to this day, and have been designated as important cultural assets.

Legend says that the shrine was originally founded in Sendagi, just north of the current location by Yamato Takeru, who is a famous hero from the ancient myth. However, no structures from the original shrine remain.

The shrine also contains a large azalea garden, which features around one hundred different species and can be seen in bloom every April. This has earned Nezu Shrine a reputation as “Tokyo’s most beautiful shrine.”

When Ieyasu Tokugawa (徳川家康), the Founder and First Shogun of Tokugawa Shogunate, moved to Edo city almost 500 years ago, he designated Hie Shrine as the protector of Edo castle.

Today, the shrine is also known as Sannou-sama (山王さま) by local residents and thought to grant wishes for matchmaking, happy marriages, and success in business.
You’ll also find many Monkey statues dotted around the grounds. In Shinto, Monkeys are thought to be the messengers of the god who resides in the shrine.

Every June, Hie shrine is also the setting for the famous Sanno Festival, which is one of the Big Three Edo Festivals in Tokyo. Hundreds of lanterns are put on display while people enjoy dancing and singing to the sound of Taiko drums.

There are three impressive Torii gates that lead to the main shrine building – Omotesando, Urasando, and Inari-sando. (https://tokyolucci.jp/hiejinja) These three gates at the Hie Shrine are known as “Sanno Torii,” which has a unique mountain shape at the top.

From 1871 through 1946, the Hie Shrine was officially designated one of the Kanpei-Taisha (官幣大社), meaning that it stood in the first rank of government supported shrines.

Meiji Shrine is one of the most popular sightseeing spots in Tokyo, and the number of visitors can reach over 3 million on New Year’s Day. Meiji Shrine was completed in 1920, eight years after the death of Emperor Meiji. The original was destroyed during World War II but was quickly rebuilt afterward.

The shrine itself is located in the middle of a vast forest that envelops it in serene calmness. The tranquil greenery of the forest and the masterful craftsmanship of the shrine have become a haven for Tokyo`s citizens who wish to escape from the city noise.

Throughout the year, you can experience several traditional performances at the shrine. Urayasu-no-mai is a Spring Festival from the end of April to the beginning of May, where you can see Mikomai (巫女舞), a female Shinto dance where young girls carry a small baton with bells.

There is also Bugaku (舞楽), a court dance with traditional music, and Nohgaku (能楽), a Japanese play using masks, during this period. Meiji Shrine is a must-see location, to get a real taste of traditional Japanese culture.

Electric scooters have recently become available on public roads in the central areas of Tokyo, and we tested what’s it’s like to…
May 8, 2021