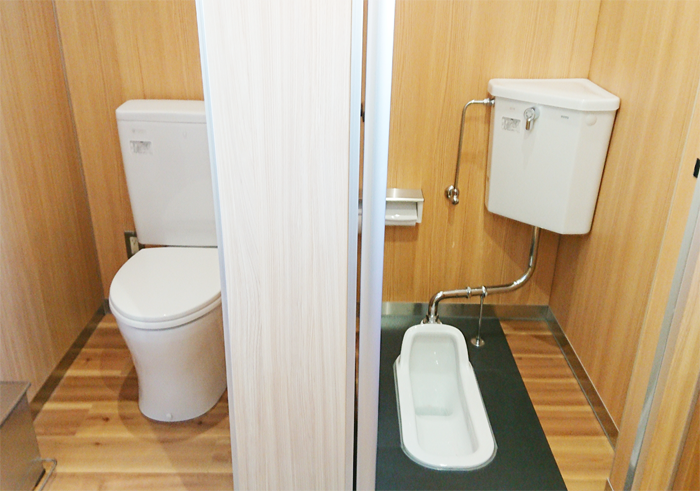 Squat-style Japanese toilets are slowly disappearing in Japan and being replaced by high-tech toilets as people avoid using them.

Just when you’re minding your own business, going about your day, you begin to feel it.  Your stomach churns and feels bloated, you know what’s coming, and it’s not a “number 1”.  You now have “T minus” a couple minutes (give or take) depending on your “situation” to find a bathroom ASAP.

If you’re lucky enough to be at home or somewhere with an easily accessible bathroom to go and take care of your business, no problem.  But, if you’re out in public, or in the middle of nowhere, you may need to think fast.

Thankfully, in today’s modern day and age, there’s usually a bathroom somewhere nearby that we can “utilize” when in need.  While “number two’s” aren’t exactly dinner-table talk, there’s no shame in talking about it because we’ve all been there.

If you’re in Japan, or have ever visited Japan, this story can potentially play out quite differently.  It’s not that the situation is different, but the means of dealing with the situation can be.  What I’m talking about usually plays out like this:

You need “to go”, and I mean need “to go”.  You look around for the nearest bathroom whether that be in a convenience store, train station, or a questionable public park toilet, and you find one.  Here’s where the story takes a turn.

Just when you start to relax, you open the stall door hoping to see the good ‘ol porcelain throne you’re used to, but then, panic.  You look down to find a traditional squat toilet AKA, a “squatter”.  You begin checking all of the other stalls hoping to find something more familiar, but there isn’t any other option, so you “pop a squat” and handle your business.

Further, they are generally considered to be more “healthy”.  This is because of a couple of reasons.  The “squat” position is said to be the natural position that humans have been assuming since the dawn of time when going to the bathroom.  It has been said that the position makes it easier for things to “move through and out” of our bodies that way.

Next, the lack of contact with a toilet seat is what causes many to consider it being a more hygienic option.  Also, the simpler shape of squat toilets makes them easier to clean, thus adding to the notion that they are more hygienic than sit-down toilets.

While there are benefits, there are also flaws that many people note.  These involve the risk of soiling clothing if the user doesn’t know how to properly use the toilets or isn’t the best at assuming the squat position properly.  Squat toilets can also pose problems for people who are less flexible, injured, disabled, or elderly.

Otherwise, they are often criticized for being “too much of a hassle” to use and less “relaxing”.  For all of the reasons above, “squatters” are slowly disappearing in Japan as less and less are being installed.

To get a better understanding of what’s going on, a representative from the Japanese company  TOTO, the world’s largest toilet manufacturer stated that only about 1% of the toilets they make nowadays are squat toilets.

Continuing, the representative added that the orders are pretty much exclusively being placed by public parks, schools, and train or bus stations.  Adding on, the reasons may be because traditional Japanese toilets actually use less water, making them more cost-effective.  Also, TOTO’s “Toilet Study and Research Division” is preparing to begin changing Japanese-style toilets in schools to sit-down toilets.

Of course, nowadays, Japan has the most high-tech toilets in the world. In fact, one of the things people first notice and comment on when they visit Japan are the heated seats and high-tech systems that house an array of different buttons and functions for you to use. Sometimes, as soon as you enter the bathroom the top lifts up automatically!

These toilets are literally everywhere now. This also likely contributes to the squat toilet losing popularity because of the “luxury” experience people can have on a daily (or sometimes multiple times a day) basis.

What Do Japanese People Think?

When people living in Tokyo were asked about squat toilets, as the trends suggest, they often claim to avoid using them if possible.  One respondent recalls their grandparents’ old home having one, and apart from that only remembering seeing them at their elementary school.

A man in his 20’s said that his elementary school and middle school had some, but only recalled ever using a squat toilet once in his entire life.  A woman in her 20’s said that she notices that they are still in public park bathrooms but avoids them, so she doesn’t remember when she last used one.

So it seems that the squat toilet is a dying breed.  For those of you who have never visited Japan, but plan to in the future, you may never even need to ask “how do I take a crap?” just like Jack Elliot did in the classic 1992 movie “Mr. Baseball”.

On a side note, even if you “miss out” on using a squat toilet, you can still learn all about them and other toilets at TOTO’s Toilet Museum in Kitakyushu, Japan!