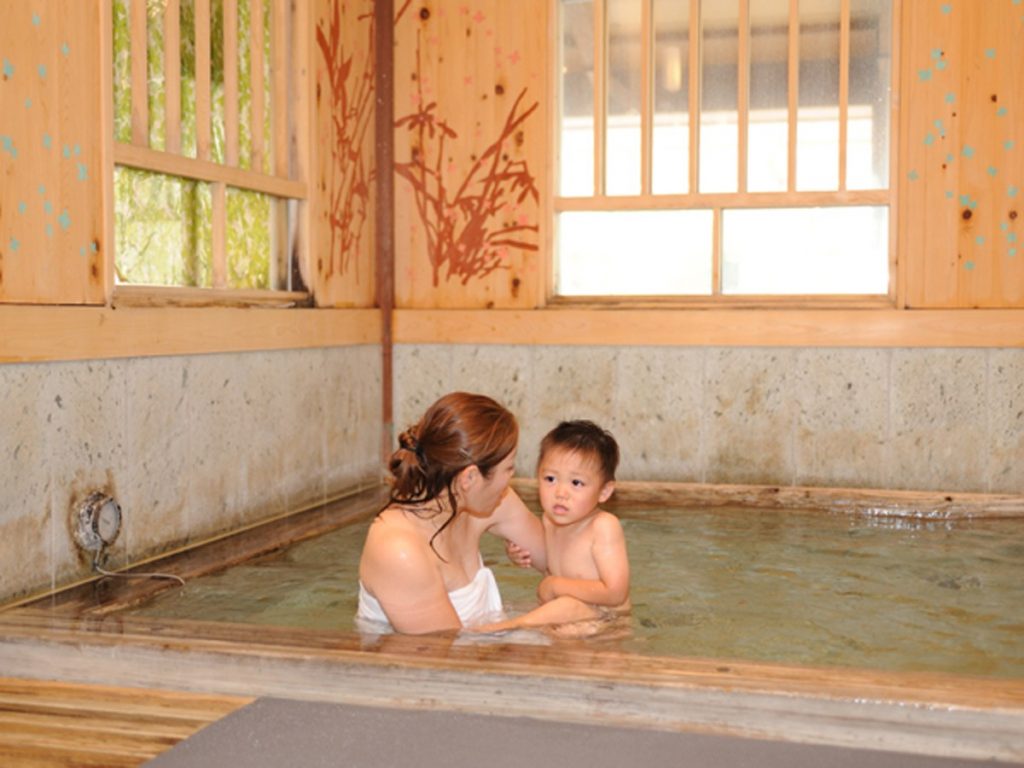 “In the past, my son used to take a bath in the women’s bath with his mother when he was small, but now that he is in elementary school, he is embarrassed.”

Although it takes a bit of courage to visit a hot spring or public bathhouse in Japan where part of the experience involves being naked in front of strangers, once you get over your initial reluctance to be so exposed, soaking in a piping hot bath can be one of the most relaxing parts of any visit to Japan. While there are still a few public facilities left for mixed bathing by adults, they tend to be fairly rare. Thus, public bathhouses are, generally, segregated by gender. That said, it is still relatively common for a mother to bathe together with a male child in the bath only for women. Sometimes fathers take their young daughters with them into the men’s bath.

Despite many years of living in Japan and frequent visits to local hot springs, I admit that I become a little uneasy whenever a father brings his young daughter into the bath for men. It can be awkward and sometimes upsets the tranquility of the experience of soaking in the hot water or taking a sauna. Thanks in part to a recently commissioned national survey, now there is a lively debate about whether to impose some sort of age limit for mixed bathing.

The Current Reality of Public Bathhouses in Japan

No Age Limit for Mixed Bathing in the Past

Mixed bathing—regardless of age—used to be commonplace in Japan many centuries ago.  This practice is called konyoku (混浴) in Japanese.

Until the early 20th century most homes did not have a private bath.  Thus, it was routine to visit a public bathhouse, known as a sento (銭湯) in Japanese.  Everyone would simply bathe together.

This development led to the need for rules about the age until which boys would be allowed to accompany their mothers into the bath for women.  There was also the need to establish a similar age restriction for girls who would bathe together with their fathers in the men’s bath.

As more and more homes were built with their own private bath during the post-war period, people have, in general, stopped frequenting public bathhouses.  They simply bathe in the privacy of their own home.

That said, visiting hot springs remains a national past-time.  Most hot springs also tend to be segregated by gender, although it is common for families and couples to rent a private bath on site.  There are, however, plenty of mothers and sons as well as fathers and daughters who bathe together in the public facilities.

Even though most public bathhouses and hot springs are not very deep, the potential for drowning cannot be taken lightly—especially because most bathers tend to be completely self-absorbed.  It is, therefore, not realistic to expect a very young child to be left unattended by a parent or another responsible adult in a bathhouse.

While some children are much more mature than others, when it comes to practical concerns about safety, easy-to-follow guidelines are necessary.  At present, the rules are “as clear as (the) mud” in many of the hot springs.

Ambiguous Guidance from the Central Government

The Ministry of Health, Labor, and Welfare’s (MHLW) guidelines on hygiene management in public bathhouses had previously prohibited mixed bathing at the age of “roughly 10 years and older.”  The keyword here being “roughly,” as it is open to interpretation.

As a result, to this day age restrictions for mixed bathing tend to vary dramatically across the country.  The bottom line is that there are no hard-and-fast rules concerning mixed bathing in gender-specific bathing facilities.

At present age limits for mixed bathing are determined by ordinance in each prefecture or state.  In many cases, the rules vary by municipal government.

Some local governments have established by-laws that restrict the age of mixed bathing in public bathhouses.  According to the Research Institute for Local Government (地方自治研究機構), as of January 2021, there were 38 prefectures that stipulate an age limit in their ordinances.  Of these, Kyoto Prefecture had the lowest age limit of 7 years and above.  Tochigi, Iwate, Yamagata, and Gifu Prefectures have the highest age requirement of 12 years and above.

Age 12?  Seriously?  It is fair to say that most tweens would be too embarrassed to enter the bath for the opposite sex, but they could in at least 4 prefectures of Japan’s 47 prefectures.

At Siebold’s Bath (シーボルトの湯), a public bathhouse in Ureshino City, Saga Prefecture, children who appear to be in elementary school are asked not to take a mixed bath.  In such cases, parents are recommended to rent a private bath only for their own family.

The rules for some facilities are based upon height rather than age.  A public bathhouse in Kitakyushu City, Fukuoka Prefecture, set up its own rules about two years ago, prohibiting children over 120 centimeters tall from taking mixed baths.  The impetus behind this move was due to receiving complaints from customers that there was a large boy in the women’s bath.

“As a rule, children up to 130 centimeters tall are allowed to take a mixed bath at the spa. For safety reasons, it is preferable for children up to the second grade to bathe with their parents.

These rules seem fairly straightforward. There just needs to be consensus about whether the height restriction should be 120 or 130 cm!

As an attempt to put this issue to rest, a national study by MHLW was commissioned last year.  The results were just released.

MHLW commissioned a survey that was conducted by Professor Seiji Ueda (植田誠治教授) of the School of Health at the University of the Sacred Heart in Tokyo.  It included 1,500 male and female children aged 7 to 12 from every part of Japan.  Survey results indicated that the most common age at which children begin to feel “embarrassed” to enter a bathhouse of the opposite sex without a bathing suit was 6 years old (27%).  The answer to that question was age 10 among only 4% of respondents.  Thus, the policy of some prefectures to allow 12 year-olds seems preposterous.

MHLW also sent a questionnaire to 3,631 adult males and females across the country.  More than 80% responded that “age restrictions are necessary.”

While there still is no binding rule which applies uniformly across the country, Professor Ueda’s survey results have provided momentum to revise current local ordinances.

The consensus seems to be that the age restriction should correspond to the second grade.  Thus, up to age 7 or 8 is likely.

Establishment of an Age Limit at Public Bathhouses Welcomed by Parents

Kazuhiro Takenaka, age 51, was visiting a bathhouse in Kitakyushu City when he was interviewed with his eldest son, who is in the sixth grade. Mr. Takenaka recalls,

In the past, my son used to take a bath in the women’s bath with his mother when he was small, but now that he is in elementary school, he is embarrassed.

My eldest son used to go into the women’s bath until he was in the early grades, but he pushed back.  Thus, he started going into the men’s bath on his own before he turned nine…Lowering the limit is a good thing.

Proprietors of public bathhouses and hot springs seem to be aware that something must be done, but they are wary of having to deal with potential personal injury lawsuits, complaints from customers, and the possibility of less traffic.

Some would simply prefer the status quo.  The manager of Siebold’s Bath explained,

It is a matter of public morals, not hygiene. It should be left to the discretion of the business operator.

To avoid problems, we should lower the age limit.  However, a mother with a seven- or eight-year-old boy might think, ‘It’s difficult for me to let him go by himself into the men’s bath alone,’ and that might make her less likely to come.

Although these are real concerns, bathhouse operators would probably be better served with unequivocal rules that establish a national standard.

While we will just have to wait and see, given the controversy surrounding this issue, it seems inevitable that some sort of lower age limit for mixed bathing is on the near horizon.  Until then we’ll all just have to be prepared to experience some awkward moments in the bathhouse.