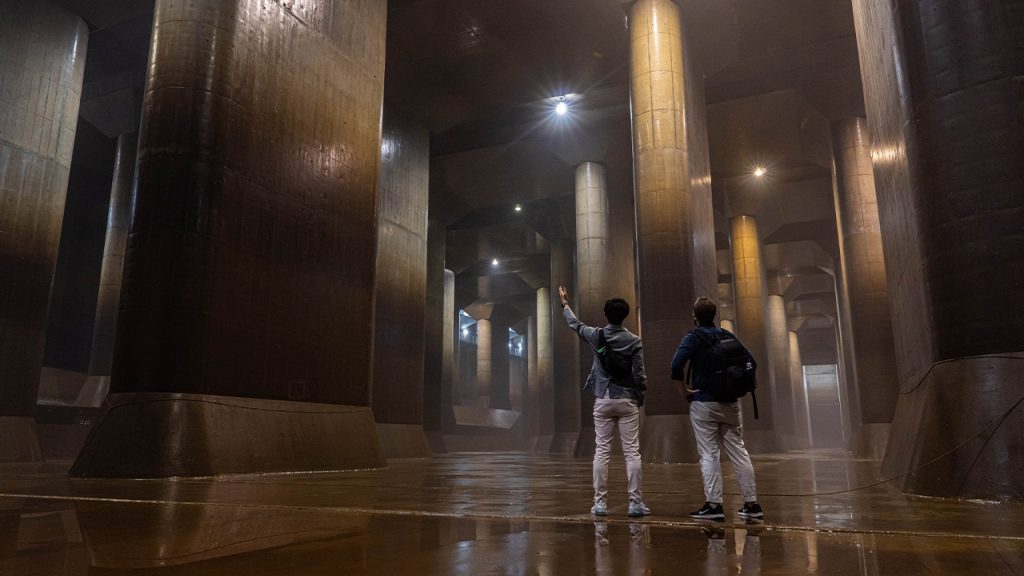 Tokyo’s Underground Temple located deep in the earth is an incredible feat of engineering, protecting the city from damages due to floods.

Tokyo is the biggest metropolis in the world and lying deep in the earth is an incredible feat of engineering, protecting the city from untold damages due to flooding. Unknown to many, the G-CANS and facility (also referred to as the Underground Temple) is a colossal drainage system that can divert potentially devastating amount of floodwater, safely away from the capital.

Watch the Video and Find Out More

The official tour takes you into the heart of the 首都圏外郭放水路（しゅとけん がいかく ほうすいろ) or Metropolitan Area Outer Underground Discharge Channel in English. It’s a mouthful in both languages, which is why it is often abbreviated to G-Cans for short.

The greater Tokyo area, which consists of Central Tokyo as well as the prefectures of Kanagawa, Chiba, and Saitama is built on the Kanto Plain, Japan’s largest area of flat land at 17,000km2 and is intersected by many small rivers, making it especially prone to flooding.

With Tokyo’s rapid urbanization the area is now home to over 38 million people and uncountable trillions of yen in property and business value, so it goes without saying that flood prevention is a big priority for the Japanese government. In 1993, construction began on a ¥230 billion project that would take 13 years to complete. Since its construction, the system has reduced flooding in the capital by around 80% and is certainly a modern marvel of engineering.

The main discharge tank certainly is colossal, measuring 177 meters long and 78 meters wide. The 59 pillars that support the roof, weigh 500 tons each. It’s also not hard to see why this structure is referred to by many as 地下神殿（ちかしんでん）which means the Underground Temple, as it has a striking resemblance to the Greek Parthenon.

The main discharge tank is just the final stage though, as there are also 5 other silos along the chain that collect water from the Ootoshifurutone, Koumatsu, Kuramatsu, and Naka Rivers. Each of these silos is approximately 70m deep with a diameter of around 30m. That’s enough space to hide the Statue of Liberty in or even a space shuttle!

The aim was to build a 6.3km tunnel, 50m below the city, that would connect several of the most flood-prone rivers in the area and safely divert their overflow into the much larger Edogawa river.  At maximum capacity, the system can handle up to 670,000m3 of water. and in order to offload this into the Edogawa river quickly and efficiently, this facility is equipped with 4 incredibly powerful, 14,000 horsepower pumps that can discharge water at up to 200 cubic meters per second. That’s fast enough to drain an Olympic sized swimming pool in only 12 seconds.

Fans of the videogame ‘Mirror’s Edge might recognize this location from one of the levels featured in the game. It was also the underground setting as the main characters approached the capital city in The Hunger Games: Mocking Jay – Part 2.