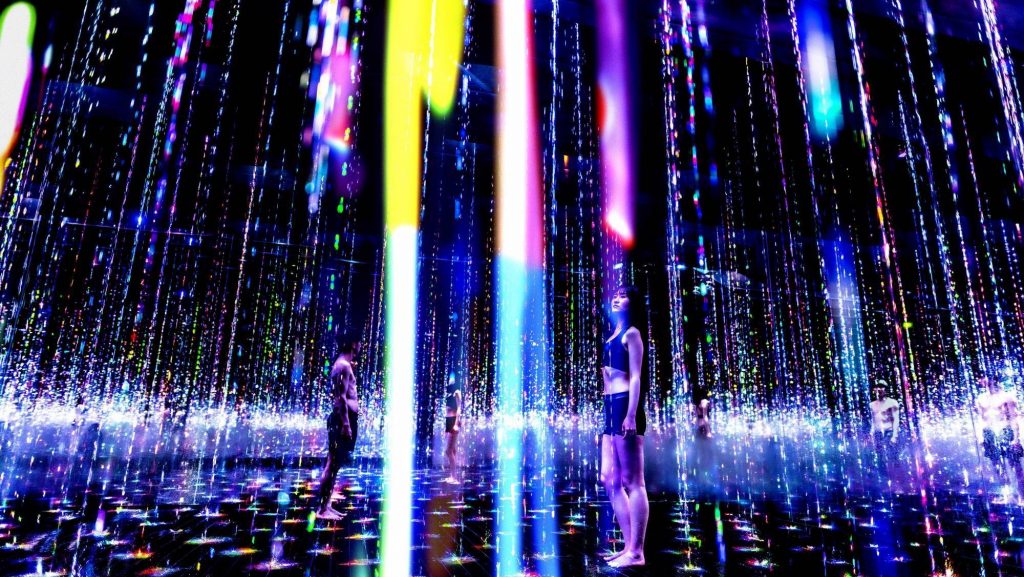 The visionaries behind the immersive digital art exhibits are back again with TikTok teamLab Reconnect. Reconnect looks to take the immersion experience one step further by combining a sizzling sauna with a refreshing shower to make visitors as relaxed as possible before viewing the captivating digital art. According to the project’s creators, “the theme was to transform visitors into the greatest state possible and have them become part of the art.”

Sweat Out in Unique Sauna Rooms

The sauna room features seven different rooms, including female-only rooms, to use for your own private group. Each sauna has unique features such as varying levels of heat and unique and relaxing smells. The scents add to the relaxation experience and include things such as roasted green tea or cinnamon and ginger. The room’s humidity or dryness can also be controlled, making it fun for both sauna beginners and veterans alike. While you sit back and sweat it out, you can enjoy various sounds from nature to help you relax, like the crackling of a fire, the flow of a river, or the wind in a forest.

The cold water showers are chilled to a constant temperature and contain two separate shower heads installed by the head and shoulders. For those who do not wish to get their hair wet, there is also an option to receive cold water from the shoulder-facing shower head. When entering the shower area, all visitors will pass through a circle of light. This is a reference to the Buddhist practice of Enso, where a circle is drawn with a single brush stroke to express a moment when the mind is free to let the body create.

Enter the State of Sauna Trance

It is in this “Sauna Trance” condition that teamLab believes art can be viewed best – for some visitors, viewing art after entering this state can heighten awareness and perception, making them feel like they themselves are becoming a part of the exhibit.

After entering the state of sauna trance, it’s time to submerge yourself and enjoy mesmerizing digital art. The first installation is the ‘Proliferating Immense Life in the Rain’, which utilizes projection on two large walls and takes you through the life cycle of plants throughout the year.

The next exhibit is the ‘Ephemeral Solidified Light,’ giving the illusion of “Countless solidified light crystals float in the air, rising, falling, and sometimes frozen in space.” This strange part of the display further adds to the surreal factor by attempting to change your perception with its gravity-defying beams. This shock to your everyday world is intended to trigger a change in how you view the world.

The final installation is called Levitation, which presents a mesmerizing and colorful orb floating in a black void. “The sphere falls to the ground and rolls away when people hit or impact it. But if there is no external interference, it will slowly rise into the air again, as though restoring itself to its original state.”

The Ultra-technologists behind TikTok teamLab Reconnect

TeamLab is a collective group of artists, visionaries, engineers, programmers, and architects formed in 2001. The group has been known to refer to themselves as “ultra-technologists. Since its founding, the group has created dozens of exhibits across the world that stretch the imagination. A common feature of the works is using projection mapping to add interactively and moving art pieces directly onto walls or moving objects.