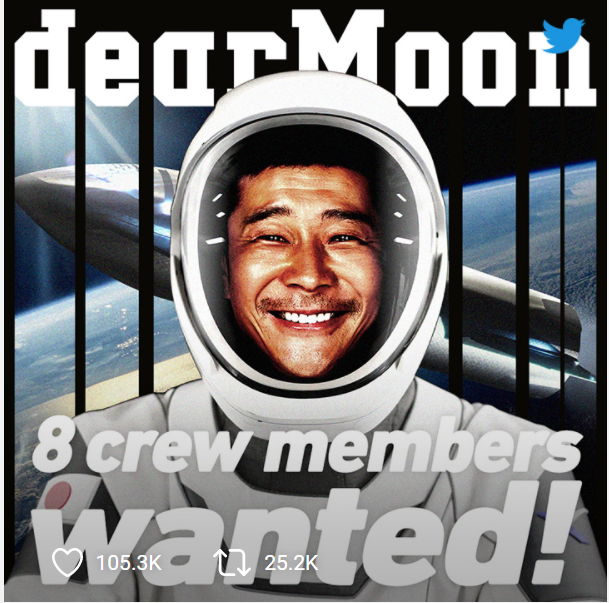 Japanese entrepreneur and billionaire Maezawa Yusaku is taking applications for 8 lucky people to accompany him on his mission to the moon.

The Japanese billionaire Yusaku Maezawa is taking eight lucky people with him on his trip to the moon! The entrepreneur initially announced back in September of 2018 that he will be participating in the moon’s first commercial flyby and will be taking eight artists with him. The flight is currently scheduled for 2023 and plans to fly using the SpaceX Starship craft. However, on March 3, 2021, Maezawa announced on his Twitter that the journey will now be taking eight citizens from across the world instead of artists. Maezawa’s original Tweet below reads as follows, “Eight people will be invited to the moon trip scheduled for 2023. We’ll start accepting applications from today! Let’s have a fun trip together!”

Since the application site, dearmoon.earth, went live, Maezawa has reported that over 300,000 applications have been submitted. Applicants have applied from over 237 countries across the world. In terms of ranking, India currently has the most number of applicants, followed by the United States and Japan. After the initial document screenings, applicants will go through a task screening, an online interview, and a final interview and medical check that are scheduled to take play this May. If you want a chance at being selected to go to the moon, now’s your chance! Applications for the trip close on March 15.

Listen to the News on Our Podcast

Who is Yusaku Maezawa?

Yusaku Maezawa is a very successful entrepreneur who founded the online clothing retail clothing store Zozotown as well as the Contemporary Art Foundation, an organization in Tokyo that aims to support young and upcoming artists. He recently also added ZOZO, a custom-fit clothing brand where you can measure yourself at home using a Zozosuit. In 2019 he retired from zozotown and sold 50% of his share of the company to company Softbank for 400 billion Yen, or around $3.7 billion.

While it no guarantees in helping your chances, some people are using Maezawa’s Twitter presence as a chance to convince him to bring them along. One user below by the name of @wangtang1977 shows off his detailed map of the moon and asks Maezawa to please bring him along.

Another potential applicant is Japanese composer and producer Kenta Matsukuma. He states, “Mr. Maezawa, I completed my application for the moon trip! This is a dream come true and an amazing project. My staff are afraid of a crash and tried to stop me, but of course, I will go! I will have the rocket carry my acoustic guitar and write a song while looking up at the Earth from the moon. I’m looking forward to it!”