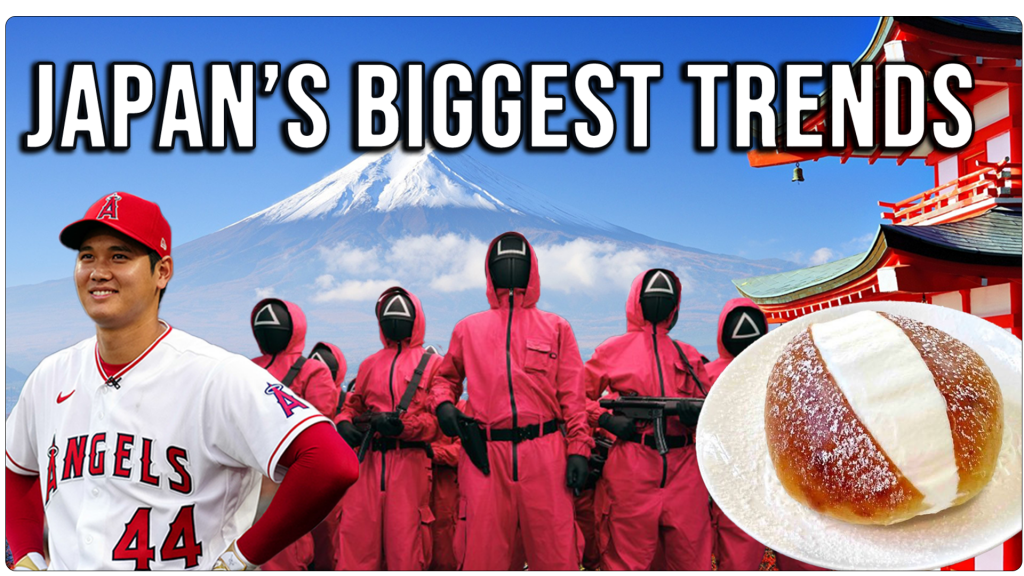 Japan’s biggest trends of 2021 are here due to a recent survey published by LINE! Can you guess what people were into the most last year?

2021 LINE Survey of More Than a Half Million People

No matter how you cut the data, that’s a huge sample size.

Results of the 2021 LINE Survey

Ubiquitous SNS platform LINE used its own app to reach out to users during the 3-day period from November 29 to December 1, 2021, to ask which topics were of most interest during 2021. LINE gathered valid responses from 548,460 people, which certainly qualifies as being statistically significant. All respondents were at least 13 years old and included men and women from all parts of Japan. The results were weighted by both gender and age.

The results indicate that the top three topics of greatest interest overall were as follows:

The results varied, however, by both gender and age.

27-year-old Shohei Ohtani topped the list for men in all age groups.

In terms of gender and age, Ohtani ranked first in all age groups for men, from their teens to over 60s. The percentage increased as the age group increased, with more than 50% of men in their 60s.

Ohtani personifies the ideal sports figure in Japan due to his unrivaled skill as both a pitcher and home run king, reserved demeanor, popularity overseas, and willingness to put in hour after hour of practice. He has a lot of female fans, too, but it seems even baseball legends are no match for Italian pastries and fruit sandwiches.

While the guys were focused on baseball, women across the country were caught up in last year’s trend that fueled the popularity of the Italian pastry maritozzo.  It was more popular among women than men, ranking first among women in their teens to 40s.

About 40% of those in their 20s to 50s voted for the traditional Roman confectionary that is, essentially, a sandwich made out of whipped cream.  This trend originated in Yamanashi and has quickly spread throughout the country.

Another long-running favorite, the somewhat less exotic, home-grown fruit sandwich, also ranked in the top five among women in their 50s, 60s, and older.  Overall this fixation on fruit sandwiches—as measured separately from #2 maritozzo—was enough to rank #8 at 9.6% overall.

Other Results from the 2021 LINE Survey

Below the Top Three topics of interest, the results become more fragmented. A few themes stand out, though.

It was no surprise that the Tokyo 2020 Olympics & Paralympics ranked #3 overall.  After a year’s delay, Japan basked in collective national pride, as so many of its athletes excelled across a wide variety of sports.

The global pandemic continued to affect life around the country.  The need to eat in silence and mask up at the dinner table came in at #4 overall with 15.2% of the vote.

Japan is a nation of beer lovers, and perennial favorite Asahi caught their attention by launching a new version in its Super Dry line of canned beer (アサヒ スーパードライ 生ジョッキ缶) last April.  What made it such a hit was the unique packaging which makes it possible to tear off the entire top of the can.  The concept was to make the beer drinking experience similar to what it is like to drink a regular draft at a bar or restaurant for only 219 yen ($1.91 U.S.) for a 340ml can.

The inside of the lid also features tiny bumps, which are supposed to produce more foam.  Although there was no change to the content of the actual beer, the packaging innovations were enough to cause the brewer to capture the #5 ranking at 12.6%.

Coming in at #7 with 9.8% was the hit anime/manga series Jujutsu Kaisen (呪術廻戦).  It was especially popular among female teens and 20-somethings, along with another popular anime/manga series called Tokyo Manji Revengers (東京卍リベンジャーズ).  Although it looks like a counterclockwise swastika, the character manji (卍) in the title of this series is, by the way, actually a symbol from Buddhism and has no connotations to Nazi Germany.

Both anime/manga series were also ranked No. 1 in the survey of trends among the younger generation.

Detailed Listings from the LINE Survey

The overall results were as follows:

The breakdown by both gender and age were as follows:

The LINE survey is certainly a useful tool for recording the historical pulse of the Japanese people during 2021.  The sample size is unprecedented, and the firm is to be commended for publicizing its data.  Check back this time next year to see which topics were trending throughout 2022.

For more trending topics in Japan from 2021, check out which new words were added to the Japanese dictionary last year!