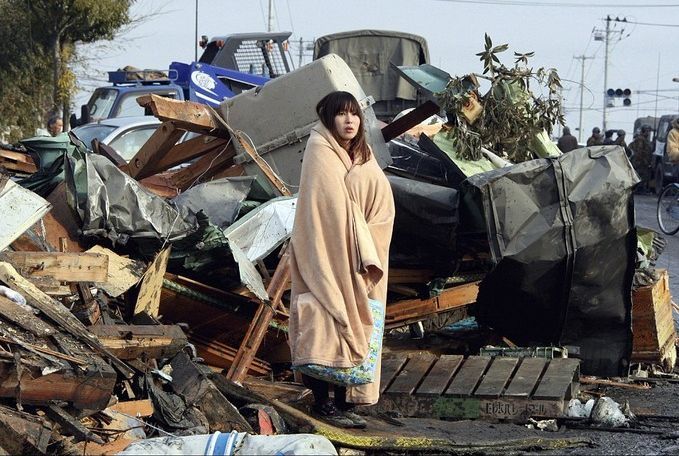 Magnitude 7.3 earthquake strikes in roughly the same location as the epicenter of the Great East Japan Earthquake a decade ago.

Just after 11 p.m. on Saturday, February 13 a massive 7.3 magnitude earthquake severely rattled the Tohoku region of northern Japan. It was felt as far away as Hiroshima. It lasted for about 30 seconds, which is long for an earthquake.

The epicenter of last week’s big one was just off the coast of Fukushima and Miyagi Prefectures. This is the same general area where the infamous Great East Japan Earthquake occurred a decade ago. That once-in-a-lifetime event is called Higashi Nihon Daishinsai (東日本大震災) in Japanese. Government authorities wasted no time to act.  Right away, experts determined, luckily, that there was no cause for concern about a tsunami this time. People were, however, warned about the potential for aftershocks and more landslides. The next morning local government agencies assessed damage and began to coordinate relief efforts.

For many, the parallels to the Great East Japan Earthquake of March 11, 2011, were clear.  Geologists consider last Friday’s seismic event to be an overdue aftershock from that deadly earthquake, which measured 9.0 magnitude.  It caused a huge tsunami, which killed thousands. The huge wave subsequently slammed into the Fukushima Daiichi Nuclear Power Plant, where a meltdown was narrowly avoided.

That “triple disaster,” as it is called in Japanese, killed almost 16,000 people (not including more than 2,500 who are still reported as missing). Hundreds of thousands more were displaced. March 11 is commonly referred to as “3-11” in Japan (similar to how Americans recall the “9-11” terror attack in New York City).

The pain and anguish inflicted by Mother Nature on 3-11 continue to this day.  At its peak, 116,565 displaced people were housed in temporary housing.  As recently as March 2020, more than 700 people were stuck in those facilities in Fukushima, Miyagi, and Iwate Prefectures.

Although the physical damage to collapsed structures and landslides from last Saturday’s earthquake was extensive, there were, luckily, no casualties and only 50 injuries.  However, there has likely been much-unseen suffering—especially by those who lived through the terror of 3-11 and were forced to re-live this horrifying experience last weekend.

Japan is certainly a country accustomed to earthquakes. Lingering anxiety left over from 3-11 remains, though, very much of ongoing concern for many.  Aftershocks can immediately trigger fear. Unlike how the road crews are so deftly able to clear away debris quickly and rebuild, for many who have lost so much, it is likely to take much longer to get back to normal—if that is even possible.

Still Living with PTSD from 3-11

Even for people who were not located close to the epicenter last Saturday night, the vivid images from the live television reports brought on stress leftover from 3-11.  Researchers have documented that survivors of natural disasters tend to experience varying degrees of stress according to a predictable schedule.

Years after 3-11, many are still living with Post-Traumatic Stress Disorder (PTSD). It is much like how soldiers suffer debilitating flashbacks years after returning home from the battlefield.

Some people are still unable to recover from their pain more than a few years after the disaster.  Some are unable to adapt to the new environment because they lost their jobs in the wake of a disaster. Some fall into financial distress.  Others are affected because their living environment changed significantly, as they changed jobs or moved.  The elderly and disabled tend to adapt particularly poorly.  It has also been well documented that alcoholism increases dramatically in the affected areas.

In Fukushima many still live in fear of the long-term exposure to radiation leaks.

People with PTSD tend to be reluctant to do anything else, avoiding other disaster-reminiscent situations.  They tend to become less responsive overall.  Risk factors for mental health issues are most common among people who were displaced, those with pre-existing conditions, and people with a limited social network.

In the immediate aftermath of a strong earthquake, experts recommend separating the treatment of the mind and body.  As the victims are exhausted both physically and mentally, first, they simply need a hot meal and a quiet place where they can rest.  Given years of practical experience, Japanese relief campaigns tend to be capable of dealing with the short-term, acute needs of earthquake victims.

It often takes, however, much longer to recover from PTSD.  Support groups, relaxation techniques, and simply being around positive people can help.  The proverb “time heals all wounds” may apply in most situations.  It is, though, not always possible for everyone to overcome PTSD.  That is why the rest of us need to be sensitive to the needs of people with PTSD.

While contributing money to relief drives may be an option for some, at the very least, it is possible to offer moral support on-line.  This Tweet from Tomo is typical of the supportive messages that appeared immediately following last Saturday’s earthquake.

Tomo wrote, “The earthquake on the 13th was scary. I’m sure some of you may be anxious, considering the difficult circumstances.  May the Twitter circle continue to be a place of encouragement and support.  We are praying for your safety.”

The international community was also quick to offer support on-line.  The German Embassy sent out the following Tweet on the Monday after the earthquake.

The thoughtful message says, “We would like to express our deepest sympathies to all those affected by the earthquake that struck at night on February 13.  There was much damage, and many of you are probably feeling anxious—especially in the midst of the ongoing aftershocks.  We are sincerely praying that everyone in the disaster area can return to their normal lives as soon as possible.”

These types of message are very much appreciated.

A Fact of Life in Japan

As they live in one of the most seismically active places in the world, the people of Japan have long been accustomed to living with earthquakes and other natural disasters.  Earthquakes figure prominently throughout Japan’s recorded history.  There are few living survivors of the Great Kanto Earthquake (関東大震災) in 1923, which killed almost 150,000 people, but many vividly recall more recent seismic events.  Only a few weeks ago was the anniversary of the Great Hanshin Earthquake (阪神・淡路大震災), which killed 6,434 people in 1995.  More recently, in 2016, more than 50 people died, and 44,000 were displaced in a large earthquake in Kyushu. Like 3-11, these are the kinds of events that become etched indelibly into memory.

Japanese people are resigned to live in fear of potentially even bigger earthquakes that could strike at any point.  For years seismologists have been predicting huge earthquakes will occur at some point in the next hundred years due to seismic activity along the Nankai Trough in the Pacific Ocean. They have divided the risk areas into three regions, including the Tokai Region (in and around Shizuoka Prefecture), the Tonankai Region (off the coasts of Aichi and Mie Prefectures), and a large swathe of western Japan along the Pacific coast.  Any one of these anticipated earthquakes could take more than 200,000 lives.

It can, however, be challenging to interpret this type of abstract danger.  Hn shared a somewhat stoic point of view.

Hn tweeted, “Some say that there is no point in worrying about a natural disaster that may occur only once every 100 or 200 years, but the Tokai earthquake could be so devastating that it cannot be ignored.  This earthquake is long overdue.  It is, in fact, surprising that it has not yet taken place.  It is, therefore, best to prepare for the worst and live every day like it could be your last.”

What Can You Do?

While there is only so much you can do, it is, naturally, best to prepare in advance.  While your office may have already prepared on your behalf, you should definitely set aside a small stash of supplies—especially water–at home.  Some snacks, medical supplies that you cannot live without, and a small amount of cash should also be set aside.  The Japanese word for this type of preparation is bichiku (備蓄).

Next, you should take earthquake preparedness drills seriously.  It can be difficult to give your full attention to these practice sessions at work, but it is always better to be safe than sorry in the long run.  Most prefectures have facilities with extremely realistic earthquake simulators where you can experience what a real earthquake feels like.  Some even have mobile simulators.

There may not be much you can do in advance to prepare for anxiety, which may follow the traumatic experience of an earthquake.  Living in constant fear is, naturally, not a healthy option. At the very least, it is important to be aware of how difficult it may be to cope with such a natural disaster and empathize with those who have lived through them.

March 11, 2021, the upcoming tenth anniversary of the Great East Japan Earthquake, is likely to be a challenging time for many of your Japanese friends.  Some may grieve silently on this day as they re-live painful memories. It is, therefore, best to keep this in mind as we approach this milestone.

Despite being bullied heavily in school, Remu Nemi worked hard to make her dream of becoming an idol that inspires other come…
April 29, 2021