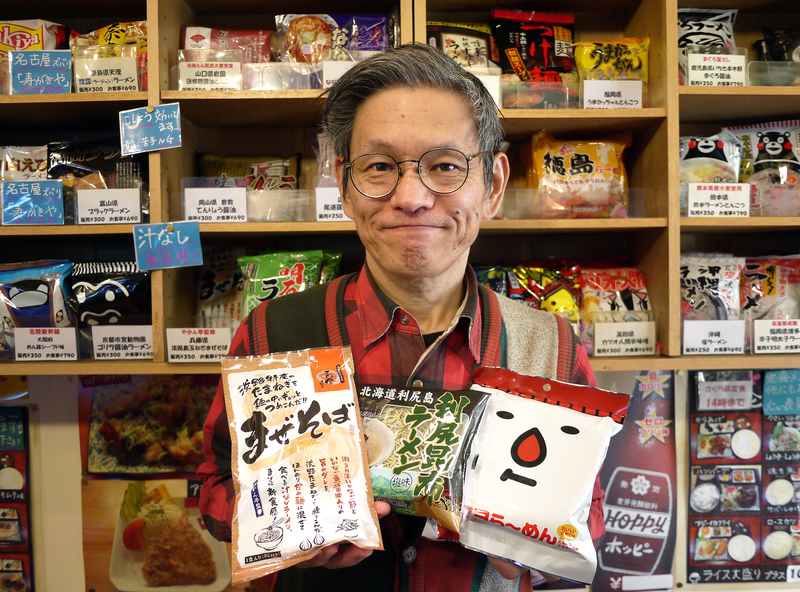 Japan’s instant ramen king, Sokusekisai Oyama, has eaten instant noodles daily for over 30 years and made a career out of cup ramen.

Sokusekisai Oyama: Making a Career Out of Instant Ramen

Ever feel too lazy to cook?  I know I have, and I also know that Sokusekisai Oyama, Japan’s instant ramen king, definitely has.  By definitely, I mean, everyday for the last 30 years.

Sokusekisai Oyama, a professional instant ramen critic has eaten a bowl of instant ramen or “cup ramen” as it’s referred to in Japan, everyday for the last 30 years, a number which has likely increased and will continue to increase.

That’s right, at least once a day, for the last 30 years.  Just to put that in perspective, Oyama says he eats more than 600 servings of instant ramen a year.  He also estimates that he’s had over 10,000 servings in his lifetime.  That’s a lot of instant ramen.

For example, they aren’t just bricks of dehydrated noodles you throw in a saucepan to boil.  Take Sumire Ramen, a super famous miso ramen shop from Sapporo, Japan, who now have their own instant ramen.  Or Ichiran Ramen, another very famous ramen shop with their own instant noodle line.  Both of these “premium” instant noodle options have actual toppings, not just flavored powder to create a broth. In fact, they even use real dehydrated meat and veggies to recreate an as-authentic-as-possible taste.

Falling in Love with Instant Ramen

Now, back to Mr. Oyama, the king of instant ramen.  Born Masaya Oyama in Nerima, Tokyo in 1959, Oyama attended Gunma University and obtained a degree in engineering, and was a former illustrator before getting into, you know, becoming a professional instant noodle critic, or in other words, living the dream.

Like university students all over the world, it was when Oyama was a student that he fell in love with instant ramen saying that it was here that he “woke up to instant noodle love.”  It was also when he started collecting the packaging of all the different types of instant noodles that he slurped up.

Now, he has over 6,000 different types of ramen packages in his collection, enough to start a museum, though the Cup Noodle Museum in Yokohama already exists.

It’s safe to say that Oyama quickly became a connoisseur of instant ramen.  Oyama would go on to win TV Tokyo’s Instant Noodle Championship in 1995.  Oh, you mean you’ve never heard of the Instant Noodle Championship?  It’s a game show where contestants battle it out to determine who’s the most knowledgeable about instant noodles.  Not to be confused with the various Ramen Grand Prix’s, of course, game shows where ramen shops compete to determine who has the best ramen.

After becoming the newly crowned Instant Noodle Champion, Oyama became somewhat of a celebrity, and has consistently made appearances on TV every now and then ever since.  He stated that after the win, the number of “instant noodle related job” offers increased, and got him to the position he’s in now.

His most recent notable appearance on TV was back in 2018, when he was crowned the TV Champion Goku Kiwami Cup Ramen Arrangement King.  What is this, you ask?  This show required contestants to add “a little extra effort” to making instant noodles, to make them better.

In other words, contestants would choose a cup ramen that they like, and add a few more ingredients to transform it into a “gourmet” meal.  Then, judges, usually ramen shop owners, would vote for who made the best tasting dish.  Kind of like an instant noodle Hell’s Kitchen.

If you’re getting hungry, or wondering what the instant ramen king picks for his favorite type of instant noodles, back in 2015, he announced on television that his current number one pick at the time was Keizai Shimbun Osaka Ramen.  A classic ramen with shoyu or soy sauce-based soup.

After 30 years, and over 10,000 bowls of instant ramen, Oyama seems perfectly fine. In fact, he embraces his lifestyle and career.  While he hasn’t commented on anything related to health or his future plans in relation to eating instant noodles daily, he’ll most likely continue to enjoy a hot bowl of instant noodles every day, potentially forever.

Make sure to follow him on Twitter @Sokusekisai to see what he’s up to, or which bowls of ramen he’s been enjoying recently. Here’s one of his recent Tweets!  Enjoy!

In this tweet Sokusekisai outlines that his dinner for the day was a soy sauce based instant ramen from Family Mart, a Japanese convenience store. He left a short review saying it featured charred green onions, fried green onion, and minced pork. He notes that the broth really brought out the flavors of roasted soy and the firm noodles provide a great texture!

Tokyo Banana celebrates its 30th Anniversary with Tokyo Banana Steamed Curry Buns! Would you give them a try?
December 24, 2021