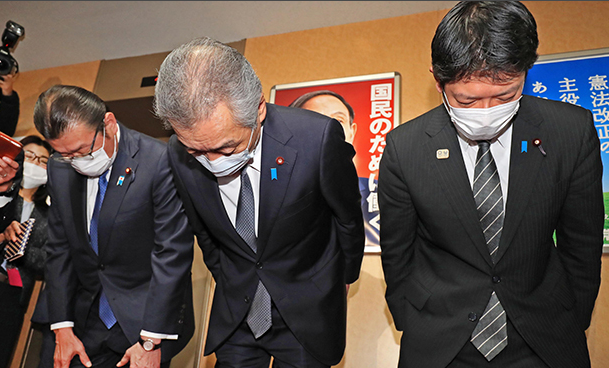 On February 2, three members of Japan’s Liberal Democratic Party announced their withdrawal after details of their visits to night clubs emerged.

3 Politicians and 2 Hostesses Walk into an Italian Ginza Bar…

On February 1, 2021, three politicians, Jun Matsumoto, former chairman of the National Public Safety Commission, Taido Tanose, former Vice Minister of Education, and Takashi Otsuka, former vice-chairman of the National Public Safety Commission, all announced their resignation from Japan’s Liberal Democratic Party. The incident began when the former public safety chairman, Matsumoto, visited an Italian restaurant in the lofty Ginza neighborhood one evening after a Diet session. Sometime after his meal, he headed to a nearby club and was photographed walking out of two different Ginza night clubs in the same neighborhood. He was then seen heading back to his parliament dormitory at around 11:20 p.m. Currently, Tokyo, as well as many other prefectures across Japan, are under a state of emergency, and people are encouraged to remain indoors during the evening. Many restaurants and bars, including night clubs and karaoke buildings, are also requested to close their doors from 8 p.m. as well.

Despite being caught red-handed, the former chairman of public safety initially made excuses for his visiting the clubs. At first, he claimed that “I went to the store to ask for a petition.” However, this lie was discovered when more photos revealed that he was accompanied to the Italian restaurant by several women from the same club he would later visit. Matsumoto continued with false claims in an attempt to cover for his juniors, stating that he went to the club completely alone. However, photos soon proved that not only were his former vice-chairman Takashi Otsuka and former minister Taido Tanose with him at the Italian restaurant, they were also all together at a previously unknown third club later that evening. Due to their previous positions and the uncovering of multiple lies, all three politicians have announced their resignation from the Liberal Democratic Party.

Matsumoto has held a wide variety of political positions over the course of many years, including being a member of the House of Representatives, Deputy Secretary-General of the Liberal Democratic Party, and Chairman of the House of Representatives Welfare and Labor Committee. Such a messy incident, especially in the case of Jun Matsumoto, is likely to take a heavy toll on the LDP’s reputation. One member of the Diet directly confronted Prime Minister Suga, who is the current president of the LDP, about when he became aware of the information regarding Jun Matsumoto visiting multiple clubs with numerous people including other politicians. Prime Minister Suga claimed to only know of the incident on the day it was announced publicly by Matsumoto himself. He also formally apologized to the citizens of Japan and promised that such an incident will not be allowed to happen twice.