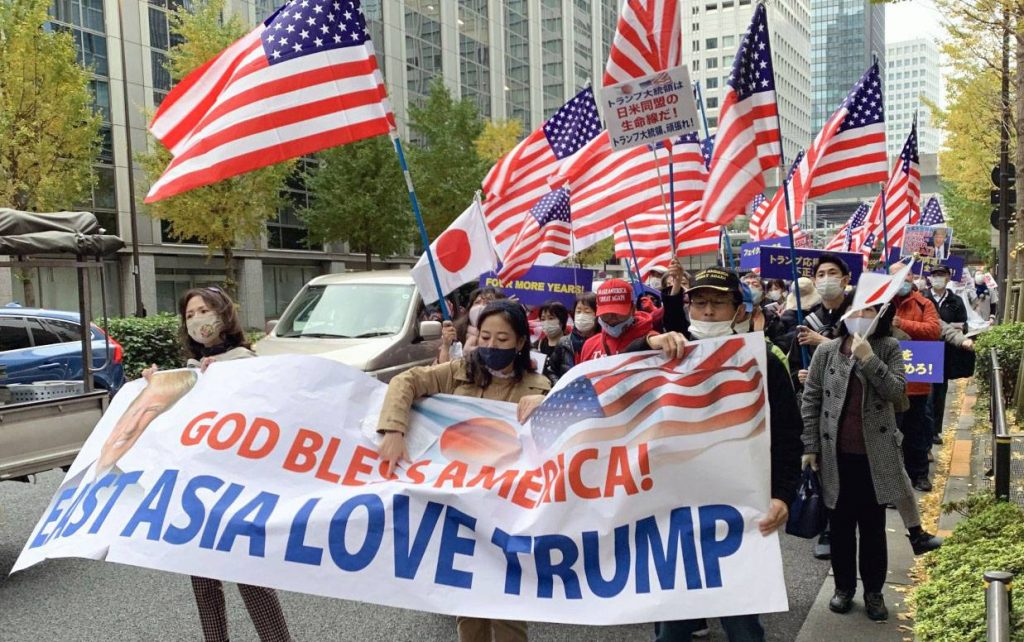 Just hours before America’s protests in Washington led to a storming of the Capitol, Japan was seeing its own demonstrations in Tokyo. Following Donald Trump’s call to action to help overturn the recent 2020 presidential election results, a group of around 1,000 Trump supporters gathered in Tokyo to show their support. The crowd was seen waving American flags, posters claiming election fraud, and even the Japanese imperial flag used during wartime. Of the 1,000 in attendance, 300 were confirmed to be members of Japan’s Happy Science organization, a controversial religious organization that is often characterized as a cult.

One reason that Trump is seeing support from many Japanese citizens stems from rumors concerning Joe Biden and his relationship with China. His son Hunter Biden has been accused of making deals with Chinese companies and even involving his father directly. At a similar protest in Japan back in late November, signs could be seen reading “New Federal State of China,” implying that a Joe Biden administration would be under the influence of the Chinese government.

This also plays a role in the participation of Happy Science members. One of Happy Science’s more controversial beliefs is that both China and North Korea are planning to invade and colonize Japan after conquering it through nuclear warfare. Trump’s anti-China rhetoric is one reason why both Happy Science members, as well as citizens with heavy nationalistic values, gravitate towards Trump.

Despite receiving his second impeachment on January 13th, many conservative Twitter users continue to show their support. Aside from his views on China, Trump’s hard takes on immigration, such as the wall and keeping America first, remain popular talking points among his supporters. One politician from Hiroshima prefecture encourages Japanese citizens to look to Trump as an example. In a Tweet which included a video of Trump synced to Ymca by Village People, she states,

“To the many Japanese people watching Trump’s back, we have learned many things…let’s become a country that protects itself!”

In her profile she states that she is strongly opposed to accepting immigrants into Japan.

At times, Trump’s Twitter fanbase can be extremely supportive to the point of worship. The Tweet below shows one user’s opinion in regards to a video describing a conspiracy theory on how Trump’s administration is actually a military operation to overthrow a corrupt central government. The user states,

“I’m crying while watching this. President Trump…Is the most admirable person in all of history. If he and the U.S. military had not taken action…mankind would have been wiped out!”

The Tweet has gained over 2,000 likes and has received many quotes from others with responses such as, “Trump will win!”