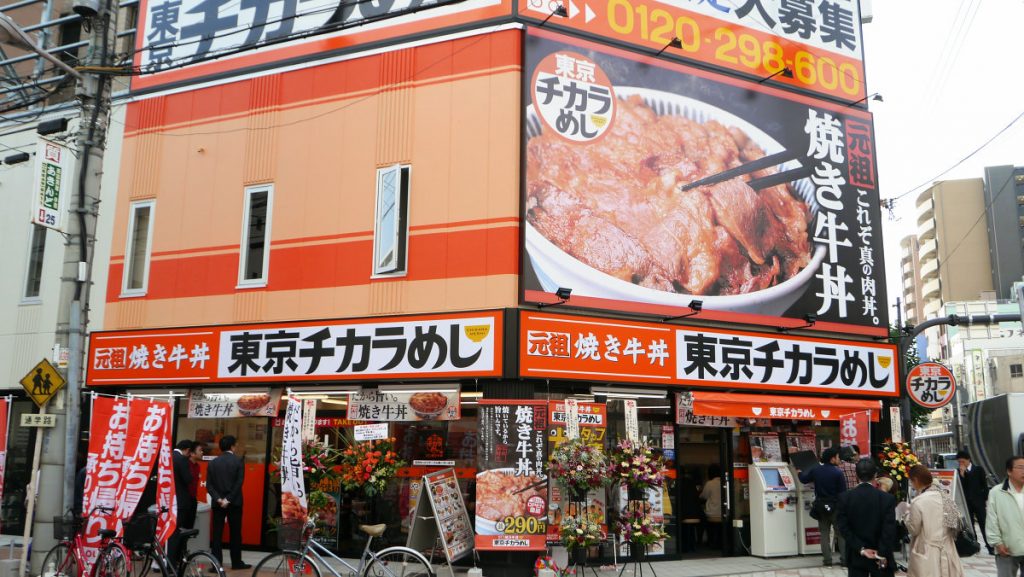 Check out a list of some of the gone, but not forgotten gyudon or beef bowl chain restaurants in Japan. Try not to get too hungry!

When in need of a quick and cheap meal, the options that come to mind likely involve the words “you want cheese with that?”. While burgers, tacos, and doner kebabs are delicious and solid options, you have many more to choose from in Japan.

Furthermore, cheap and fast meals in Japan are not always unhealthy either. Fast food in Japan, of course, entails the staples like McDonald’s, Burger King, and KFC, but Japan also offers somewhat healthier options like Hanamaru Udon, Origin Bento, and the all-mighty gyudon or beef bowl chains like Yoshinoya, Sukiya, Matsuya, and Nakau.

Gyudon will always be there for you when in need of a quick fix of some plain old but delicious beef on a bed of rice. From a quick snack to a full meal to a perfect way to end a night out, 24-hours-a-day, gyudon chains like Yoshinoya or Sukiya will welcome you with open arms.

As soon as you enter the brightly lit franchise locations, you are overwhelmed with the scent of braised Japanese beef. After you order your delicious beef bowl on a ticket vending machine, you give your ticket to a staff member, and shortly after, it’s time to eat.

You may have added some of the various side dishes like kimchi, miso soup, or some toppings like scallions and a raw egg. You may have sprinkled some Japanese spices atop your gyudon, or maybe you just had it plain. Either way, it tastes amazing, and you only paid about 500 yen ($4.50 US).

Since the first Yoshinoya opened in 1899, 120 years later, gyudon chains are everywhere in Japan. However, throughout the years, while many chains had surfaced, your options for gyudon are generally limited to four establishments: Yoshinoya, Sukiya, Matsuya, and Nakau.

As for the “Big Four” of gyudon chains, I’ll leave it up to you to try them and be the judge of which is best. For now, let’s take a look at some of the forgotten gyudon chains that aren’t around anymore.

Gyudon Taro offered the classic gyudon and other menu items like gyudon topped with tofu, katsudon, fried pork cutlet and egg on rice, and oyakodon, meaning “parent and child” referring to chicken and egg on rice. Now a few of its former employees are keeping the chain alive under the name Don Taro. They simply redacted the “gyu” from the name.

Many of its chains closed in the early 2000s, with the operating company going bankrupt in 2013. Only one location remains in Shinjuku under a different name, Tatsuya.

Gyu-yu was once a popular chain known for its double beef and curry bowl that offered the best of both worlds: curry rice and gyudon. In the ’90s, the chain had expanded all across Tokyo.

The company went bankrupt, and by 2002, the stores were all closed. There is, however, a store called Gyuhachi in Oimachi that offers a similar menu.

Yoronotaki is actually an izakaya (Japanese restaurant and bar largely focused on drinking) chain but used to offer gyudon during its daytime hours since 1977. It was once a large competitor of Yoshinoya and Matsuya.

They eventually opened a gyudon store in Shinjuku but closed in the early 2000s. But not to worry! Thanks to popular demand, gyudon was readded to their menu at their izakaya locations in 2017!

Once a popular chain with 50 locations across Tokyo at it’s peak, Kobe Lamputei offered unique menu items like their salt beef bowl and mayo-chiki (chicken and mayonnaise) bowl.

Literally meaning “Tokyo Strength Food,” Tokyo Chikara Meshi saw rapid expansion since it opened its first location in Ikebukuro in 2011, with 100 locations at its peak. While the number of chains has decreased, it is not gone as some locations are still in Tokyo, Chiba, and Osaka. Tokyo Chikara Meshi is known for its yaki-gyudon meaning grilled beef on rice.

The classic gyudon is made from beef boiled in a tasty soy sauce based sweet and salty broth. The grilled flavor that Tokyo Chikara Meshi brings to the table hits the spot when looking for a more “BBQ” type of taste!

Tokyo Chikara Meshi is easy to spot as their stores are often covered in large pictures of their tasty bowls of gyudon, while other chain restaurants only display their logos.

While you may not be able to try the chains that have since been closed, I guess you’re pretty hungry by now, and I won’t keep you waiting any longer. Go grab a bowl of gyudon.