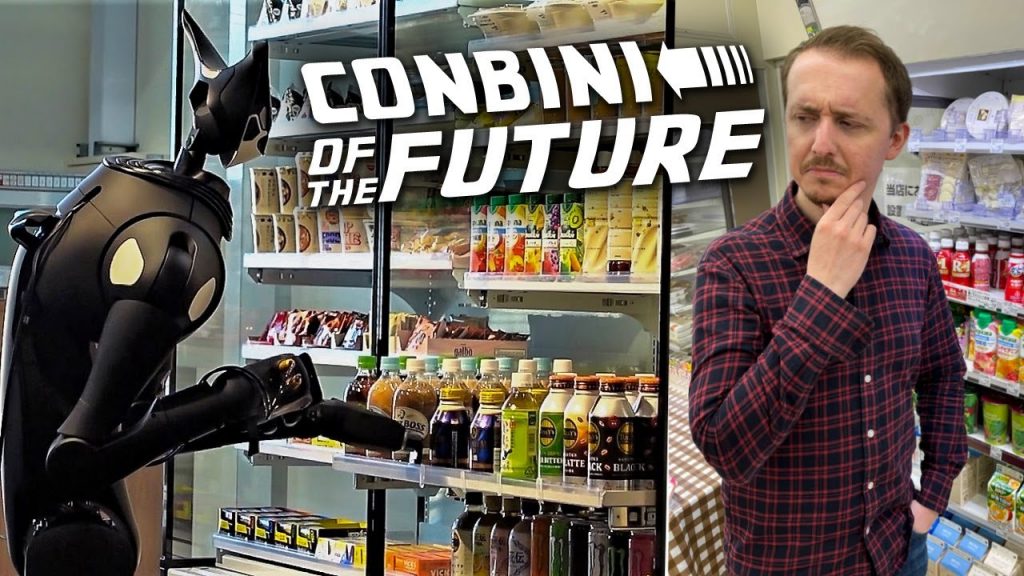 No app required at this novel “conbini” next to Tokyo Station

This pioneering conbini relies upon lots of cameras on the ceiling with sensors on each shelf.

It is a so-called “Amazon Go-like” store (see below for more details), but it does not require registration or installation of apps on smartphones in advance.  Anyone can smoothly enter the store and make payments.

Because there is no contact with any store clerks, this system meets the needs of busy shoppers who want to avoid contact with other people as much as possible.  You can simply get in and get out very quickly. Perfect for the pandemic!

The shopping experience is uncomplicated.  Just pick up the products that you want and head to the cash register.  The tracking function of the sensors displays a list of the products you have selected.  Assuming no discrepancies, you can select one of three payment methods. After that, the exit gate will open, and you’ll be on your way.

If a product from your shopping cart is returned to the shelf, it is automatically tracked.  The technology supporting this system boasts a recognition rate of 95%.  Thus, most of the time, you can check out without making any corrections.  If there is an error in the list displayed at the cash register, then the shopper can correct it themselves or connect to a customer service hotline to ask for help.

Only in Japan…You can even buy alcohol!

Another feature of this store is that you can buy alcohol.  If you pick up a can of beer, for example, then the system recognizes it as an alcoholic beverage and requests—based upon the honor system—that you confirm your age.  (You must be age 20 or over to purchase alcoholic beverages legally in Japan.)  There is a camera installed in the cash register.  Thus, the person in the back whose primary job is to replenish stock is, supposedly, making a visual check to prevent underage shoppers from buying alcohol.

The main feature of this system is promoted as “unmanned payment” or mujin kessai (無人決済) vs. an  “unmanned store” or mujin tempo (無人店舗).  That is because somewhere nearby, there is a human being who replenishes inventory and is available to address any potential customer service issues.

As of the end of 2020, Japan had a total of 56,884 conbini scattered across the country. Thus, for only every 2,200 people, there is one convenience store—most of which are open 24/7.  At a minimum, it takes two people to operate one store.  As a result, the “Famima !! Sapia Tower / S Store” represents the potential for significant labor savings.  At 1,000 JPY/hour x 24 hours x 365 days/year x 2 people, we are talking about a potential reduction of approximately 17.5 million JPY/year/store ($159K).

Moreover, these stores can be used to target “micro-markets” inside office buildings, commercial facilities, hotels, hospitals, and campuses that were previously cost-prohibitive.  Compared to vending machines, it is possible to offer a product lineup close to a normal convenience store that is likely to score points in terms of customer satisfaction.  In Japan, this untapped market is estimated to be worth 2.5 trillion JPY (approximately $22.8 billion).

Outside Japan, the so-called “800-pound gorilla” is, of course, Amazon with its Amazon Go chain of cashier-less convenience stores, which opened to the public in January 2018.  Now there are 25 of these stores located in large metropolitan areas of the U.S.

Shoppers first must check in with the Amazon Go app upon entering the store.  After that, they can shop, as usual.  Like at the “Famima !! Sapia Tower / S Store,” cameras and sensors track the items put into the physical shopping cart.  A similar record is put into the shopper’s virtual cart.  There is no check-out, as the bill is automatically charged to the payment card on file.  Amazon calls this technology “Just Walk Out.”

Staff are, however, still on hand to replenish stock and provide customer service.  Most of these stores are only about 185 square meters, limiting the number of stock-keeping units (SKUs) that they can carry.

Approximately one year ago, Amazon opened its first Amazon Go Grocery store in its hometown of Seattle.  It is almost 1,000 square meters (10,400 square feet), making it the largest use of Amazon’s “Just Walk Out” technology to date.  The generic term for this newly coined category is “Grab-and-Go.”  Amazon Go Grocery sells more than 5,000 SKUs, including fresh produce, meat, seafood, bakery items, household essentials, dairy, easy-to-make dinner options, beer, wine, and spirits.  It is pretty much like a regular grocery store.  You can get a sense of what it is like to shop at the Amazon Go Grocery from this YouTube video:

Even Further ahead in China

Although cashier-less technology got off to a rocky start in China during the first few years since its initial launch in 2016, the global pandemic has actually revived this budding industry.  One of the pioneers is BingoBox which has more than 300 pop-up type cashier-less stores spread among 30 cities in China.

BingoBox now faces plenty of home-grown competition in China.  It is expected that JD.com, China’s second-largest e-commerce platform, is likely to dominate the market by relying upon its state-of-the-art, leading automation technology.

Coming Competition from within Japan

FamilyMart may have taken the lead temporarily, but Panasonic, NEC, and Fujitsu are hot on their heels.  Competition from abroad will, moreover, soon pose a new threat. A Chinese company called CloudPick just opened a Japanese subsidiary and is, apparently, planning to launch a cashier-less store in Japan very soon with the aid of domestic partners.

The new cashier-less technology has profoundly impacted retail as the introduction of bar codes in the early 1970s.  When we get a chance twenty or so years in the future to look back to today, it is highly likely that, at least in terms of retail technology, the era of the coronavirus will mark a paradigm shift.  The future of retail—especially in the convenience and grocery segments—is clear. All indications point toward cashier-less technology becoming more dominant.

Electric scooters have recently become available on public roads in the central areas of Tokyo, and we tested what’s it’s like to…
May 8, 2021

Driving through Tokyo at Night

Join us for a night-time drive through Tokyo and Yokohama!
May 1, 2021