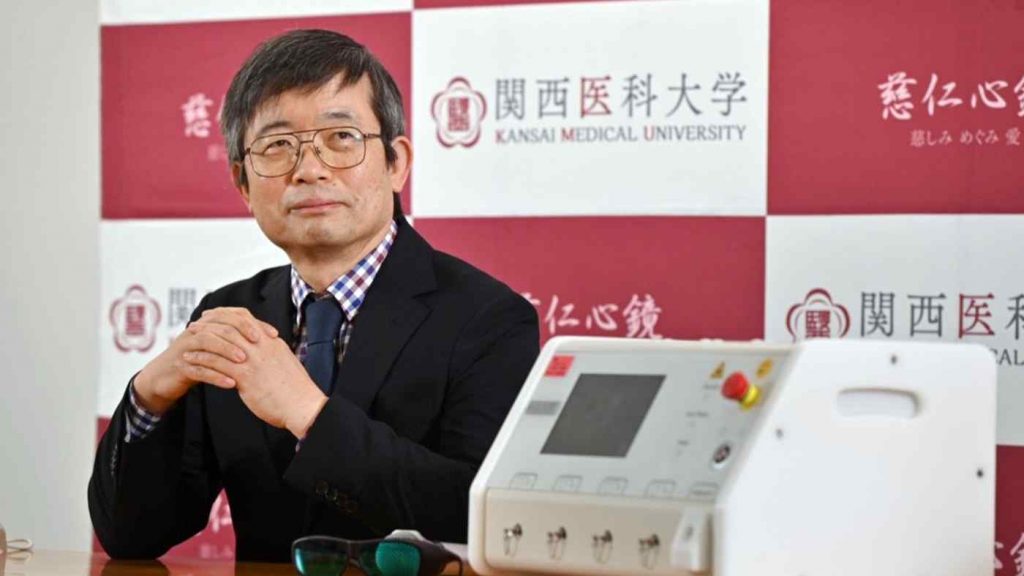 Japan approved and put into practice a new innovative cancer treatment that uses lasers to target and kill cancer cells with few side effects.

For the last 250 years, researchers have been trying to find a cure to cancer.  As our understanding of cancer and the ways to prevent and treat it have become more clear in the last couple decades, the search for the cure is ongoing.

Presently, there are four general treatments that are common.  These include surgery, radiation, chemotherapy, and immunotherapy.  Now, thanks to research led by Hisataka Kobayashi a fifth form of treatment has been implemented at 40 hospitals in Japan.

How Does it Work?

Antibody drugs bind to cancer cells, then a laser zaps them

Going into further detail, photoimmunotherapy works by administering an antibody drug called Akalux via an intravenous drip, which then binds to cancer cells by becoming associated with a protein called EGFR on the surface of cancer cells.  The drug alone is totally harmless to the body.

Then, 24 hours later, a needle is placed near the affected area to “shoot” the laser.  The laser causes the antibody drug bound to cancer cells to undergo a chemical reaction that scratches the cancer cell membrane’s surface ultimately causing the cancer cells to swell and burst due to their inability to fight off the influx of water.

As Kobayashi himself puts it, “light is used as a detonation switch, and only the cancer cells are pinpointed and blown up.”  Continuing, Kobayashi illustrates how the treatment utilizes near infrared light, the same type of lasers that our TV remotes use.  In other words, the lasers are also totally harmless to our bodies.

Because of this, photoimmunotherapy in theory can be used in repetition as many times as necessary without being dangerous.  Further, another advantage that makes this new treatment so innovative has to do with what occurs after the initial treatment, and why it’s known as photoimmunotherapy.

To explain, photoimmunotherapy helps activate immunity when the cancer cells are instantly killed as cancer proteins known as antigens are absorbed by nearby cells, causing our bodies to not only strengthen our cells’ abilities to attack cancer cells, but also learn how to attack them better, encouraging immunity.

How Does it Differ from other forms of Treatment?

Photoimmunotherapy has very few side effects compared to conventional treatment

Compared to other treatments, photoimmunotherapy as mentioned above has much less harmful side effects.  When targeting cancer cells, surgeries, radiation, and other anti-cancer drugs also damage or remove the surrounding healthy cells, in turn reducing the natural immune-inducing functions and capabilities of our bodies.

Further, with photoimmunotherapy, while much is still not known, the chances of cancer resurfacing in the body are expected to be lower than other conventional treatments because of how photoimmunotherapy causes our bodies to circulate immune cells that have learned about the characteristics of cancer in our bodies.

Implementation is new, but the idea has been around for decades

Kobayashi outlined how the idea of using antibodies to fight cancer has been around since the 1970s, when he began looking into the thought, but it wasn’t until 2003 that he came up with the idea that led to photoimmunotherapy.  His treatise on the subject was first published in 2011.

His past research involved incorporating radiation and anti-cancer drugs into antibody treatments, but found there were too many detrimental side effects stating “there is a limit to how much poison can be put into our bodies.”

Putting it in Practice

Photoimmunotherapy is utilized at 40 hospitals in Japan

Photoimmunotherapy is currently only approved in Japan and was first put into practice in January 2021 at the National Cancer Center in Chiba Prefecture.  At the moment, the treatment is limited to recurring patients who for various reasons cannot undergo other treatments or those treatments were ineffective.

Kobayashi said that the treatment is promising in dealing with breast, cervical, and esophageal cancers but is working to be able to utilize it in 80% of cancers.  The treatment is also being used for cancers in and around the head and neck.

At the moment, the treatment is administered at 40 university hospitals in Japan.  Each treatment costs 7 million yen (61,000 USD), but the cost burden is roughly about 100,000 yen (880 USD) a month with health insurance coverage.

Photoimmunotherapy is currently being developed further

While still unclear about when and whether or not the treatment will be available outside of Japan in the near future, research is continuing in Japan at a rapid rate.  A new facility known as the Photoimmunotherapy Research Institute is said to open at the Kansai Medical University in April 2022.

The facility will see Kobayashi as the director with 30 others working with him.  At the moment 20 of his colleagues who studied with him in the past have returned to their university hospitals to oversee photoimmunotherapy at their hospitals.

Photoimmunotherapy has the potential to develop even further and Kobayashi mentioned “to suffering patients, I want to increase research so that various forms of cancer can be treated as soon as possible.”

FInd out what your beloved cat is saying with NyanTalk, a cat meow translating app that has been going viral in Japan.
November 7, 2021