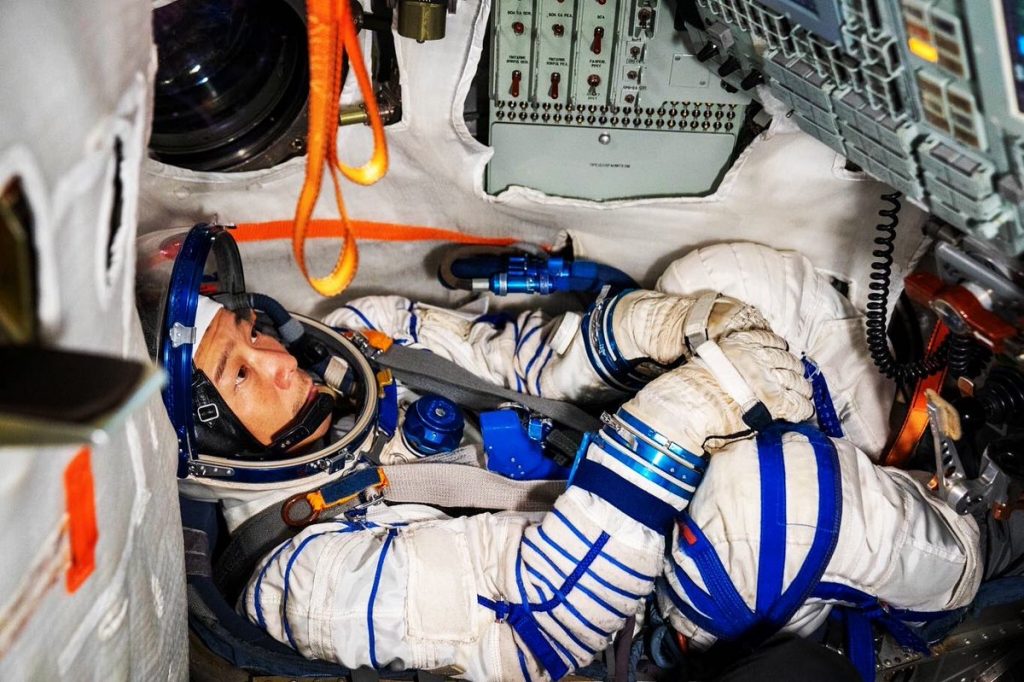 Japanese tech billionaire, art collector, and founder of Japan’s largest online fashion retail website Zozotown, Yusaku Maezawa, who is known simply as “MZ,” age 46, has set his sights to travel into space. He will be departing on December 8 for a 12 day trip to the International Space Station via flight Soyuz MS-20 and just successfully completed training in Russia. MZ is now ready to become the first Japanese civilian astronaut to travel to and stay on the International Space Station.

The Japanese tech billionaire recently returned to Japan after having successfully completed training in Kazakhastan .

MZ is particularly interested to share his experiences by extensively vlogging. He just uploaded a bilingual video of a portion of the rigorous training program on YouTube.

The flight to simulate zero gravity was, apparently, the highlight of the experience.  It certainly does look like fun.  The video now has almost 150,000 views.

MZ and Yozo Hirano, former director of photography at ZOZO Co., Ltd. and now MZ’s private photographer who also accompanied MZ during the training, will make a documentary of the upcoming 12 day mission.

Although the process was probably not quite as simple as signing up for a group trip at a travel agency such as JTB or HIS, the two actually signed up for this training via the US-based company Space Adventures. This firm bills itself as “the world’s premier private spaceflight company.“ Although Space Adventures does not publish retail pricing, there have been reports that the cost of a single seat on this flight has sold for as much as $55 million (approximately 6.2 billion yen). As the pair purchased a total of two seats, perhaps they were given a volume discount. At the very least we trust that they each will get a window seat!

To date Space Adventures has successfully coordinated all 8 flights to the International Space Station by private citizens.  They have all taken the same Soyuz spacecraft which MZ will soon board from the launch pad in Baikonur, Kazakhastan.  While there is certainly risk involved, Space Adventures touts,

The Soyuz has an exceptional track record for reliability having flown over 120 times consecutively without loss of life giving it a track record of safety that will be tough to match in the coming decades.

MZ’ Soyuz spacecraft is launched by the Soyuz rocket, which has been flying since 1966.

While he probably will not need to line up for boarding, MZ will “take his seat” two hours before lift-off on December 8.

On their website for potential passengers SpaceAdventures has described what MZ is going to experience after launch,

The strap on the boosters is discarded when all the fuel has been used, approximately about two minutes after launch. The center core of the first stage continues for a further two and a half minutes, and then the upper stage engine ignites and powers the spacecraft to 17,500 MPH (281,000 kmh) for about 9 minutes after launch, before it too is discarded.

Next MZ will rendezvous with the International Space Station 400 kilometers above the surface of the Earth.

While MZ will, most likely, be relieved to reach the International Space Station, he will not be idling away the time.

After soliciting advice on Twitter, MZ now has a list of 100 tasks to complete while at the International Space Station.  One thing to check off will be to play a game of badminton at zero gravity together with his Russian crewmate Misurkin.

MZ has also promised to tweet in English on a daily basis about his first upcoming experience in space.  You can see for yourself by checking out MZ’s Twitter account.  Here is MZ’s post from when he saw the actual Soyuz rocket earmarked for his journey.

While fewer than 600 people have had such an experience to date, MZ is still just getting started in space.  He has already signed up with Space Adventures for an upcoming circumlunar mission after giving Elon Musk a down payment.

MZ is very much of a legendary figure in the world of Japanese e-commerce.

MZ is reportedly worth approximately US $1.9 billion, which was enough for him to rank #30 on Forbes’ annual list of the 50 wealthiest people in Japan. Read more about his ranking in “Japan’s Wealthiest Ballers: Who Are They and How Did They Get So Rich?”

MZ, who was a drummer in a high school punk rock band, is a self-made billionaire that got his start in business in 1995 by selling CDs and records of his favorite bands via mail order from his home in Chiba just outside Tokyo.  His start-up, a company called Start Today, was established in 1998.

Along with the rapid rise of other online retail giants, MZ transitioned Start Today to the internet in 2000.  Four years later MZ launched Zozotown, a dedicated online retail clothing site that enjoyed explosive growth.  Its parent company went public in 2010 and helped to launch MZ into the stratosphere of Japanese internet entrepreneurs.

An artist at heart, MZ is, however, not just merely interested in business.  He has got his sights set on something much larger.

In 2019 MZ oversaw the sale of majority ownership to SoftBank for 400 billion yen ($3.5 billion) and resigned from the internet company that he founded.

He also sold most of his own shares to Yahoo Japan (now part of SoftBank Group’s Z Holdings) for more than $2.3 billion, presumably to fund his other two main passions—fine art and space exploration.

MZ established the Contemporary Art Foundation, which was “founded to encourage a lively and creative lifestyle for all.”  He has become a generous patron of the arts and has, in particular, a penchant for providing financial support to up-and-coming artists.  The Japanese tech billionarie had originally planned to take several of his favorite artists into space to do a flyby of the moon, but earlier this year he opened up his offer to pay for such a trip to members of the general public.

The original concept of inviting artists along for the ride apparently was the brainchild of MK when he pondered how one of his favorite artists, Jean-Michel Basquiat, would view the moon from up close—relatively speaking.

MZ Aspires to Ascend to the Final Frontier

In September 2018 SpaceX founder and CEO Elon Musk announced that MZ would become the first private passenger to take a trip around the moon for approximately one week.  The trip will occur at some point in 2023.

MK has pre-paid for his own ticket along with “free” seats for 8 other civilians and a couple of crew members.  All together MZ will be paying SpaceX approximately $1 billion to cover the cost of this extraordinary tour.

Before that trip he will spend time aboard the International Space Station beginning on December 8.

While it does seem as though billionaires are frequently traveling into space, such trips are still hardly routine.  MZ’s planned flyby around the moon has thus far only been done by 24 astronauts.  He will become the first private citizen to accomplish such a mission.

MZ has, undoubtedly, already led an extraordinary life.  Albeit quite unconventional for a Japanese middle-aged man, MZ has harnessed the power of the internet, founded and developed a successful e-commerce giant, sold his company to become fabulously wealthy, and is now poised to enter “the final frontier” of actual space.  We are now counting down the days until MZ will share this experience with the world via Twitter (#MZJourneytoSpace).

FInd out what your beloved cat is saying with NyanTalk, a cat meow translating app that has been going viral in Japan.
November 7, 2021