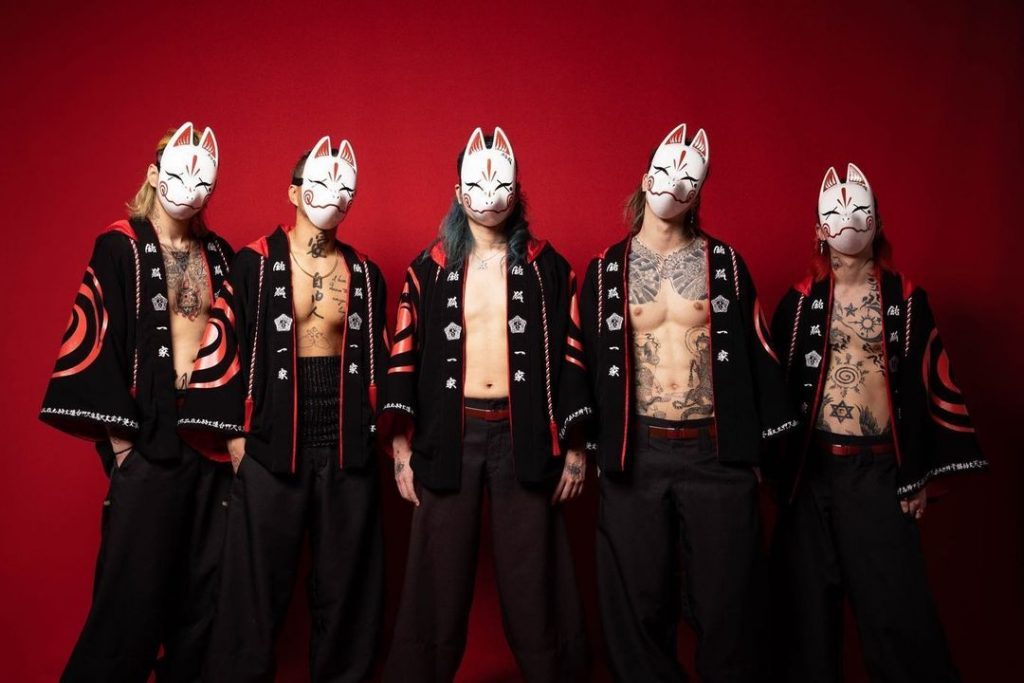 The latest music video from the controversial group Candy Foxx sparked a diplomatic row with India.

Legendary circus owner Phineas T. Barnum famously once said, “There is no such thing as bad publicity.” Well, the members of the new group Studio Candy Foxx (aka “Candy Foxx”) have taken this advice to heart to become one of the hottest new acts in Japan with dreams of global dominance.

What is Candy Foxx?

Candy Foxx is a five-member group from Fukuoka of self-proclaimed “DJs” that seems to thrive on chaos.  Consisting of former members of the YouTuber group Repezen Chikyu (“repezen” (レペゼン) stands for “representative” and “chikyu” (地球) means “earth” in Japanese), which was disbanded at the end of December, Candy Foxx has been using unconventional tactics to capture a huge following on the internet.

After undergoing an extreme make-over Candy Foxx has steadily been growing its fanbase to become one of the most popular—and controversial—new groups in Japan.

Throughout the New Year’s holiday, they must have been in a lot of pain, as each member now has several new tattoos, which they overtly show in their music videos.  Like everything else associated with Candy Foxx, this was a ballsy move, as a public display of tattoos in Japan is considered taboo.

Although the derivation of the name Candy Foxx is unclear and remains a mystery, it seems to correspond to the Japanese term ame kitsune (飴狐), which translates to “candy fox” in Japanese.  According to traditional folklore, foxes are supposed to be particularly intelligent creatures with paranormal capabilities.  They can shape-shift into human form and are often considered to be devious and even malicious.  Perhaps these traits are why the members of Candy Foxx chose their classic imagery.  Kitsune masks are also commonly employed in anime whenever a character needs a convenient disguise.

In yet another bizarre move, Candy Foxx is actually registered as a limited liability company called “Studio Candy Foxx Co., Ltd.”  This choice is curiously unusual.  Their company tagline is “We are (a) Japanese chaos company.”  Well, they are certainly causing a lot of chaos and gathering lots of attention along the way.

25 year old DJ Ginta (DJ銀太) is proving to be particularly popular and has gained a large following on Instagram.

On Instagram, his profession is simply listed as “artist.”  The concise profile says, “I have a big dream that everyone will laugh at.”  While DJ Ginta’s dream may come true, for the time being, it is Candy Foxx that is laughing all the way to the bank.

Since precisely at 9 pm on January 1st, Candy Foxx released the first of a series of creative, high-quality productions which feature an unusual cast of famous Japanese actors and actresses. Candy Foxx seems to be adhering to a strict schedule of releasing one video per month at the beginning of each month.

Their debut single was “GOSHI GOSHI.” This onomatopoeic phrase means “to scrub vigorously” in Japanese.

To date, this music video has racked up almost 42 million views since its release at the beginning of the year.  It features 81-year-old Hisako Ogata, a well-known Japanese actress who plays a “grannie” who rejects foreign food in favor of sushi—a common theme throughout the videos released thus far.

After dancing to an intense EDM beat, this seemingly sweet grandma takes a drink of an unidentified liquor (presumably sake) and transforms into a monster.  The video continues until a machine gun battle among yakuza (Japanese mafia) ensues.  In the end, everyone dances while a background chorus chants “brush your teeth” in English.  Presumably, the lyricist (DJ Shacho, the group leader) must have had a grandmother remembered for ordering her grandchildren to brush their teeth.

Building upon the initial success of “GOSHI GOSHI,” in February Candy Fox went on to release their biggest hit yet, “SUSHI YAKUZA.”

It now has almost 50 million views.  The video tells the story in English of the value of high-priced sushi.

It features 71-year-old Yoshiaki Fujiwara, a former pro-wrestler who is frequently cast as a mob boss in movies about the Japanese underworld.  He leads his gang in a rooftop fight against a rival group of Indian curry chefs, a precursor to the international incident that Candy Foxx caused with a subsequent video.

Toward the end of this video, there is another fight scene that includes the main character from their third release, “Last Lost SAMURAI,” which appeared on March 3.  This age-restricted video already has more than 23 million views.

You just have to see this one for yourself.  Perhaps it features a female fish as a symbol of fertility and rebirth.

The fourth single, “YOGA MONK,” came out right on schedule at the beginning of April.

It now already has more than 13 million views and counting.

Everything was going smoothly for Candy Foxx until they released their fifth video at the beginning of May.

Candy Foxx’s fifth music video, “Namaste!  CURRY POLICE,” was released on May 5.  It quickly became engulfed in a storm of controversy, as it was immediately deemed insulting toward Indians.

Although Candy Foxx maintains that it was meant to be a comedy, it did not take long to draw the ire of Indians in Japan and worldwide.  The government of India issued a formal, diplomatic response, and the video was taken down only three days after the original release.

Based upon comments in Twitter, it seems as though Indians were particularly upset for the following five reasons:

Candy Foxx subsequently provided a formal apology, although there have been questions about whether this atonement was, in fact, sincere.

Snipets from the “Namaste!  CURRY POLICE” still appear, however, as part of montage imagery in their other videos.

Candy Foxx’s fanbase in Japan remains loyal, but they received a lot of negative feedback online from people throughout India.

Animesh Jha summed up the feelings of many of his fellow countrymen by tweeting,

The vitriol toward the Candy Foxx’s lyricist Kohei was particuarly sharp. PSY wrote,

While Candy Foxx seems keen on building their base of fans outside Japan, it is fair to say that they have, essentially, written off the entire subcontinent.

What to Expect in the Future?

The group has, apparently, recently re-located to a yet unnamed country with the intention of brushing up on their English skills and global dominance.

While Candy Foxx is likely to surprise everyone with yet another unusual theme, the one thing that we do know is that, at the very least, it is highly likely that their next video will be released at the beginning of June.

Unless they cause another international incident, we can look forward to more videos at the beginning of each month. In the meantime Candy Foxx will keep us guessing.