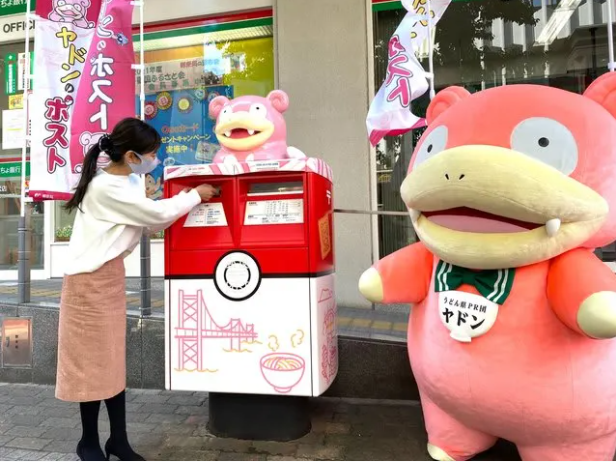 Japan has unveiled the first official Pokémon mailbox and mail truck ever. Both are located in Kagawa Prefecture and features an adorable Slowpoke design.

Pokémon Inc. has partnered with the Shikoku branch of Japan Post to create the first-ever Pokémon mailbox! Despite its cute design, this mailbox is real and will get your mail where it needs to go (although with Slowpoke as the mascot, the speed at which your mail will get delivered is definitely questionable). The mailbox was unveiled in Takamatsu City, Kagawa Prefecture, along with a Slowpoke-themed mail truck. The obsession with Slowpoke is due to the Pokémon being Kawaga Prefecture’s official Pokémon ambassador. Kagawa Prefecture is so famous for its udon noodles it is often referred to as Udon Prefecture. This close resembles Slowpoke’s Japanese name, Yadon, and thus the connection between the two was born. In December of 2018, Slowpoke became a part of Kagawa’s promotional group.

If that wasn’t enough Slowpoke for you, the central Japan Post office in Takamatsu City will also feature a unique stamp of the Pokémon that is available for all visitors until December 31, 2021. For those of you unfamiliar with Slowpoke, this empty-headed Pokémon’s official description reads as, “Slow-witted and oblivious, this Pokémon won’t feel any pain if its tail gets eaten. It won’t notice when its tail grows back, either.”

Visit All of Japan’s Pokémon-themed Regions!

While Slowpoke is the face of Kagawa Prefecture, it is not the only place you can find Pokémon-themed regions in Japan. Thanks to the Pokémon Local Acts project, local governments have teamed up with The Pokémon Company to establish their own ambassadorial Pokémon to help promote their areas. Each area has a perfectly-matched Pokémon ambassador, and unique event and merchandise found only there. For example, in Tottori, which is famous for its sand dunes, the desert-dwelling Pokémon Sandshew has become the ambassador. Iwate Prefecture, which translates literally to “rock hand,” has introduced the rock type Pokémon Geodude.

As a part of these local promotions, Pokémon Local Acts has also created Pokémon Lids. Pokémon Lids are a series of unique utility hole covers featuring beautifully colored designs of various Pokémon. Of course, you can expect to find plenty of each ambassador Pokémon gracing the cover in their respective regions. There are now covers in all the main regions of Japan, and more are still getting added! Finding all the covers really does make a person want to get out there and catch (see) ’em all!