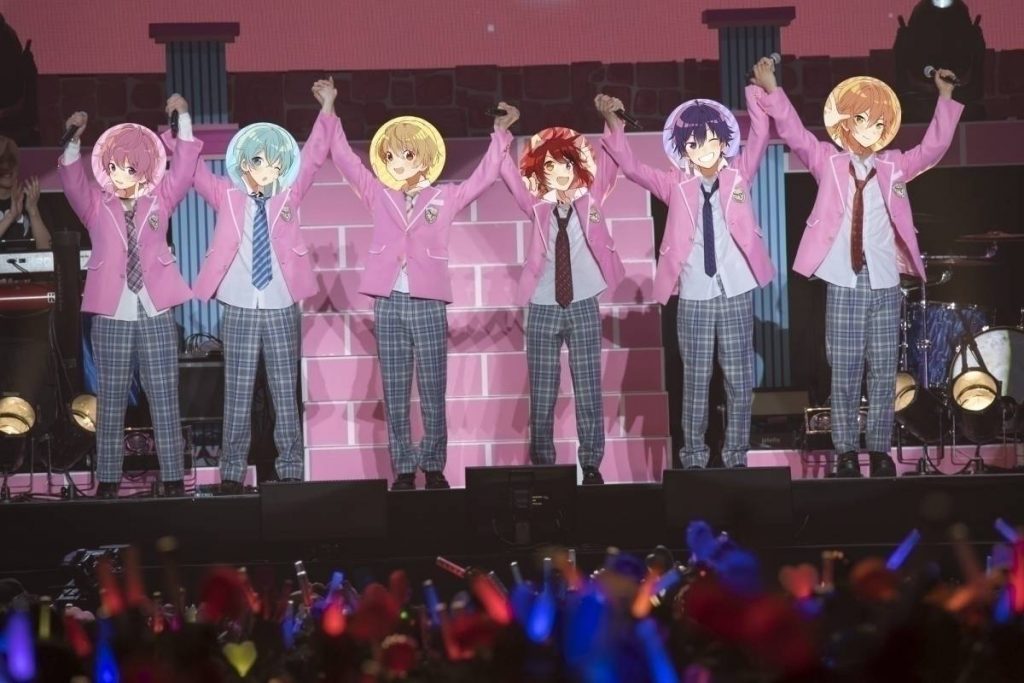 This internet-based group is bridging the gap between anime and real life by using augmented reality to conceal their faces online.

We are now in the age of artificial intelligence (AI) influencers like self-proclaimed “19-year-old robot living in Los Angeles” Lil Miquela, who has more than 3 million followers on Instagram, or her sidekick, fellow AI influencer Ronni Blawko.

Thus, perhaps it should come as no surprise that Japan’s newest boy band, known as “Sutopuri” (すとぷり) which is short for “Strawberry Princess,” is using augmented reality to bridge the gap between human and artificial intelligence.  At least this group still relies upon a human element, but who exactly are they?

Sutopuri are a six-man group consisting of members Satomi, Ruto, Koron, Riken, Nanamori, and Gel. They are active mainly on video distribution sites such as YouTube and Nico Nico Douga.  They won first place in the “Best YouTuber 2020” ranking chosen by Japanese teenage users.  Sutopuri actually maintain that they are “an entertainment unit” rather than simply “a band,” given their involvement in multi-media (just play along with me on this).

Sutopuri are not affiliated with a traditional talent agency.  The unit’s leader, Nanamori, age 25, is also the representative director of STPR, the homegrown talent agency that manages Sutopuri.  While the business end of their group may make Sutopuri unusual—especially in Japan—their real claim to fame is even more extreme.

The members of Sutopuri are represented by illustrated characters. It’s impossible to find a picture of the person behind each mask. It’s common knowledge.

If you check out Sutopuri online, you will find that there is, in fact, an avatar that represents each member’s face.  Nanamori explained the thinking behind this curious feature,

I was in my third year of high school when I started working on video distribution sites. Even when I was in elementary and junior high school, schools had already started to teach internet literacy, and we were taught that it was dangerous to expose our faces on the web unnecessarily.

Okay…but what’s up with the fact that Sutopuri show their faces during live performances?  Nanamori continued,

Since the formation of the group, we have always believed that our listeners are our number one priority. For us, live performances and ‘handshake events’ are special places where we can meet our listeners, so we participate as we are. If the listeners want to see more of us and are happy to see us, we may increase the number of times we show up.

Are you still following his logic? Nanamori provided even more details,

Our voices and personalities can be conveyed without showing our faces, but the listeners who love us don’t even know each other’s faces at first, but they connect with each other online and come to see our live performances together, or to exchange goods.

The organic development of Sutopuri online from extremely humble beginnings seems to have influenced this decision.  Nanamori continued,

We don’t belong to any big agency or record company, and since we only had a few dozen listeners, we’ve been thinking about what we could do to make our listeners happy from the very beginning. As we continued our activities, the number of people who came to watch our broadcasts increased little by little, and we gradually came to be known by many people. That’s why I am so grateful to our listeners for finding us! It makes us really happy to be able to make them happy.

Sutopuri aims to keep their listeners “happy” by reflecting their hidden, natural appearance with anime.

The Sutopuri Phenomenon Is Also an Anime Sensation

We ask the illustrator to draw the members with details such as their height and personality. We also change from month to month, so the illustrations are updated several times a year.

This approach has been refined into almost a new genre at this point, but Sutopuri got its start in live streaming.

After graduating from high school, I stopped distributing music online and worked at a regular job for a while, but I always wondered if that was really what I wanted to do. It was hard for me to receive direct gratitude from people.

When I look back on my life up to that point, the most fulfilling time was when I was doing live streaming. At that point I would routinely receive direct feedback such as ‘Thank you’ and ‘That was fun.’

This experience led Nanamori to go back to live streaming again in March 2015. He described these early beginnings,

At first, there were only a few dozen listeners who came to watch me, but the number gradually increased to about 2,000. After almost half a year, I held an event for the listeners to gather.

I reached out simultaneously to about 200 people from Hokkaido to Kyushu who were connected online. As I communicated with all of them, we began to get to know each other. I could tell that ‘Oh, this person is a good singer,” or “This person doesn’t tell lies,” etc. About two months later, I told them that I wanted to work with them, and in June 2016, I formed Sutopuri with a small number of listeners who shared my feelings.

Fast forward to today, Sutopuri now has more than 1.6 million subscribers to their YouTube channel and more than 50,000 people who regularly tune in to their live streams, making Sutopuri a real phenomenon.

Sutopuri Has Evolved into a Truly Multi-Media Enterprise

Nanamori is attempting to build Sutopuri into a multi-faceted internet-based empire. He outlined,

We’re called a video distribution entertainment unit, but actually, it doesn’t really fit. We’re willing to try anything as long as it makes our listeners happy. Sutopuri do live radio broadcasts, post videos, sing songs, release CDs, do live performances, play games, and so on… Our activities are so diverse that it’s hard to describe them in any one way. …I think the fact that we don’t have a title is one of the things that makes us unique, or perhaps one of our charms.

The “unit” is constantly coming up with new ways to connect with their fans.

Sutopuri have some bold plans for the future. They are just starting to do live broadcasts using “full-body” 3D characters. They seem to control the characters by dancing off-stage in full-body suits connected to sensors.

Sutopuri held their first live virtual broadcast, “Sutopuri Memory in Virtual!” on April 3.  It was streamed for free on YouTube, bilibili, and TikTok.  The YouTube audience for this event exceeded 170,000 simultaneous viewers.  Even before it started, “#VirtualSutopuri” was ranked as the number one trend on Twitter worldwide.

Just last week they successfully executed such a live performance on the popular music show UTA-CON (“song contest”), which is sort of like the old “American Bandstand” on Japan’s national broadcasting television channel.  (If a group or “unit” appears on this live show, then it has, most certainly, become mainstream!)

Sutopuri are also coming out with new albums.

Their third album, “Strawberry Prince,” was released on November 11.

One of their members, Gel, has also branched out with his own solo albums.

Sutopuri’s young base of fans commit their lyrics to memory by belting out their songs at karaoke.

We went to karaoke for the first time in a long time and sang for two hours straight. Recently, I’ve been really into the ‘internet-based entertainment unit’ Sutopuri, and I couldn’t keep up with their song selection…

Besides the music, Sutopuri’s fans are, however, anxiously awaiting a big event on Monday, December 6.

Sutopuri to Reveal Their Faces Next Week

Next week, on December 6th, #Sutopuri, an entertainment unit that boasts immense popularity among teenagers, will be making their first appearance with grinning faces and smiling eyes! They will talk about how they formed, why they work with illustrations, and the individual charms of their members.

This highly anticipated event, which is scheduled for Monday morning, is likely to disrupt countless junior high and high school classes across the country.

By this point, I bet that you, too, just cannot wait for Monday morning (Japan time) to find out just who are those six singers behind the Sutopuri sensation.  Their faces will finally probably be all over the internet next week.  Lil Miquela and Ronni Blawko will probably be watching, too!

Nissan has turned Japan into a massive board game course where people must travel the country and play a real-life Game of…
January 17, 2022

Two middle aged guys beat out more than 6,000 other comedy duos to ascend to the top of Japan’s comedy scene and…
December 25, 2021