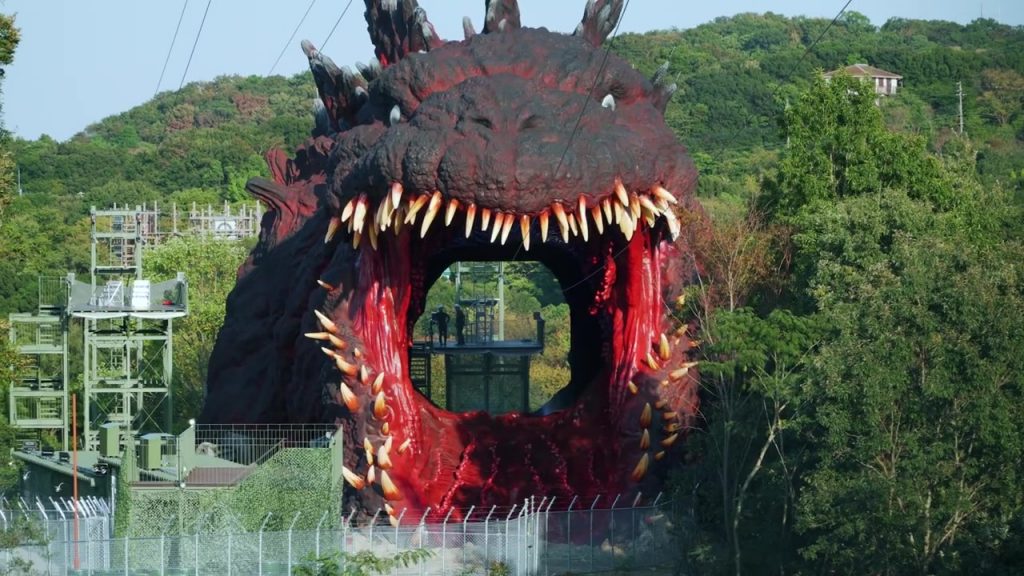 Godzilla, ‘The King Of Monsters’, has arrived in Japan!

Godzilla, ‘The King Of Monsters’, has arrived in Japan!

The ‘to-scale’, life-sized replica is part of a new attraction on Awaji Island called ‘Operation Godzilla Intercept’, which also features the World’s first Godzilla Museum. Based on Godzilla’s form in the movie ‘Shin Godzilla’, this mega model is the closest thing you’ll ever get to the real thing. With his jaws gaping wide open, you’ll have the opportunity to zipline through Godzilla!

Arriving at the NIGOD facility, you’ll be tasked with completing several missions in order to further aid the research of the inactive Godzilla, but first, you’ll need to report to the intelligence center for your briefing.

For the observation mission, you’ll have the choice of either going through or around Godzilla via the zipline. Unfortunately, you’ll only be able to ride the zipline once though, so choose your route carefully.

With your harness firmly equipped, you’ll then head up to the launch platform to speed your way through the gapped jaws of the king of monsters. Lovely.

Once the ‘internal Godzilla observation mission has been completed, you’ll report to the shooting deck for your next assignment. In order to keep him in his inactive state, you’ll have to shoot these glowing radiative pods.

You’ll have around 2 minutes to rack up the highest score possible, but be careful, when the alarm sounds, Godzilla releases a burst of radioactive energy, so you’ll need to drop and take cover.

Your last stop will be the Godzilla museum to see how the franchise has evolved over the decades.

In total, there have been 29 Godzilla since the first one released in 1954. On this wall, you can see the poster for each installment in chronological order, and, as there appear to be no signs of this franchise going extinct any time soon, they’ve even left blank spaces for future installments.

As with all franchise based attractions, the experience wouldn’t be complete without a quick stop at the gift shop, where a whole host of exclusive Godzilla merch is yours for the taking.

After working up an appetite with all those activities, you can head over to the cafe and check out one of the many collaboration food items on the menu.

If you’ve still got room left after the main course, you can also try out something sweet like this cake, that resembles Godzilla fins emerging from the ocean or a cream puff in the shape of his head, only his teeth have been replaced with strawberries.

How to get to the Godzilla Museum from Tokyo?

How Japanese Knives Are Made With Japan’s RAREST Steel

Sukehira Hirata and Nodoka Hirata are a married couple who craft Japanese blades made of the rarest steel in Japan.
July 31, 2021

Horror Ambulance is the world’s first haunted house on wheels that can be driven straight to your house.
July 17, 2021