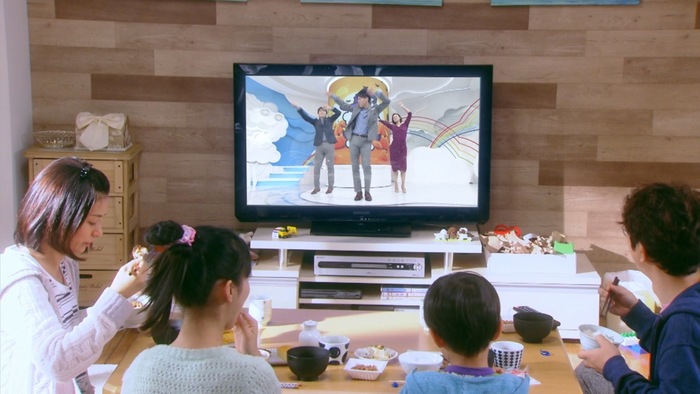 Japan just experienced the “Super Bowl” of TV ratings wars on New Year’s Eve. Now the official results are in. While NHK’s “Kohaku” defended the top spot as expected, YouTubers are starting to penetrate the terrestrial airwaves.

In the West, New Year’s Eve is typically celebrated by going out for a fancy meal with dancing or heading to one of the huge outdoor venues around the world for the final countdown to the new year. In Japan, New Year’s is traditionally marked at the stroke of midnight or shortly thereafter by a visit to one’s neighborhood shrine or temple. It is, though, proceeded by one of the biggest events that you can see from the comfort of your own living room. All you need is a remote control with fresh batteries. The last evening of the year is one of the most competitive periods on Japanese television, most of which is filmed live on New Year’s Eve.

There is really nothing like it.  The six major television channels across the country pull out all the stops and seem to spare no expense to capture as many eyeballs as possible with big-ticket line-ups.  One show even hooked up a live feed to the International Space Station so that a visiting Japanese astronaut could introduce the next act.

The big kahuna is and has been pretty much since the earliest days of television in Japan more than 70 years ago, a program produced live by the national public television station NHK.  It is aired only once per year, on December 31st.  The title of the program is “Kohaku Uta Gassen” (紅白歌合戦) or simply “Kohaku” for short.  The literal translation is “Red and White Singing Competition.”  “Teams” of a wide range of modern Japanese musical talent picked to try to appeal to just about every demographic are divided into red and white teams.  Over the course of about 5 hours of live television, these two sides take turns “competing” against each other by belting out their greatest hits.

Although the viewership has waned at certain points, Kohaku has traditionally been considered the perennial best-of-breed of the evening.  On the last day of 2020, Kohaku captured a whopping 40.3% market share on average during the last three hours of the year.  That’s actually a 3.0 point improvement over the previous year’s performance, and at one point, it has reached 47.2% momentarily. Yet, it is nothing compared to this show’s dominance in years past.

From its original debut as a radio show in 1951 through the mid-1980s, Kohaku secured approximately 80% ratings!  Considering that 1% of viewership roughly equals 1 million people in Japan, that’s pretty impressive.  Kohaku suffered a dramatic loss of market share in the late 1980s and had been hovering just under 40% for most of the past decade.  Thus, this year’s performance has been widely praised in the Japanese media.  It was, moreover, accomplished without a live audience as a safety precaution against the coronavirus.

Content proved once again to be king, as Kohaku continued its long pivot away from traditional enka (sometimes characterized as Japanese “country and western”) to the best- selling acts of LiSA, Arashi, Gen Hoshino, and many others.

LiSA is the singer of the theme songs for the most popular anime series at the moment, Demon Slayer: Kimestu no Yaiba. “Homura,” the theme song for the movie version, has recently broken the streaming record in Japan for the most number of streams during a single week with a staggering 16 million and has recorded over 150 million views on YouTube since its release two months ago.

They also went for a heavy dose of mega-member female singing groups like Hunatazaka 46 (as in 46 live performers who synchronize their dance steps while singing–or at least lip-syncing) and multi-member “boy bands” from the talent agency Johnny & Associates.

Although the legendary enka artist Hiroshi Itsuki, who has appeared in every Kohaku since 1971, was still able to secure a coveted spot in the roster, he almost had to make way for BABYMETAL who appeared a little later in the evening.

At the very end of the 5-hour extravaganza, viewers were asked to use their remote controls to vote for their favorite team.  When all was said and done, the red team eked out a narrow victory.  However, the real victory went to NHK for doing better than expected in the rating game while continuing to bridge the generation gap among their viewers.

The other five major television channels certainly did not rest on their laurels throughout the evening.  Japan TV’s long-running smash comedy “Gaki-no-Tsukai” ran a New Year’s Eve special called “You Cannot Laugh When the Poor ‘Go-to-Travel’ for 24 Hours in Las Vegas.”

It was a spoof of the Japanese government’s “Go-to-Travel” campaign, which has recently come under fire for its role in spreading the coronavirus throughout the country.  While the hosts of this show, the famous comedy duo Downtown, achieved somewhat higher ratings earlier in the evening, they were able to command a respectful 14.1% of the viewing audience during the last three hours of 2020.

Their fans particularly like the segment called “warate wa ikenai” which means “you’re not allowed to laugh.” It features a short skit which usually involves a slapstick comedy routine in which the participants struggle to keep a straight face. If they do break down and utter a laugh, then the skit is temporarily interrupted and those who laughed are subsequently beaten with plastic baseball bats or made to experience physical pain in some form. The show frequently seems to get out of control, as the same people often have trouble not giggling. Thus they are forced to endure physical pain over and over again. While this may not seem all that funny, try looking up on YouTube a previously recorded episode with English subtitles. You’ll quickly get a sense for why this show is so funny.

The Rest of the Round-up

TV Asahi, TBS, and TV Tokyo all had roughly the same share for third place.  Several of the shows on these networks featured members from Japan’s genokai or “professional talent world” enjoying local cuisine filmed live throughout the country.  This formula always seems to be a surefire way to gain attention.

Upstart from the Internet

Although Fuji TV ended up with only a 4.1% share during the last 90 minutes of the year, they actually held their own with around 7% of the viewing audience earlier in the evening.  The key to Fuji’s success turned out to be from a somewhat unconventional source for television in Japan, the internet, and YouTube, specifically.  Keep in mind that the television industry is highly regulated and notoriously insular.  Normally only members of the somewhat informal “club” of registered talent can appear on TV.  Given this background, it was especially curious to see how Fuji TV borrowed a few prominent YouTubers to participate in a live mixed martial arts (MMA) competition.  Popular YouTuber Shibatar, who typically covers pro wrestling and has well over a million subscribers, actually fought against a kickboxing champion on the program RIZIN.  I watched this fight and thought for certain that he would get killed, but at the end of the day, Shibatar miraculously pulled off a surprise move to win the match.

Shibatar was supported by fellow YouTubers Tenchim and Hikaru who has 4.3 million subscribers on YouTube and another 1.2 million followers on Twitter.  On New Year’s Day, Hikaru, the one with the two-tone haircut, tweeted, “There is still the afterglow of this day; No doubt Shibatar is one of the brightest people on New Year’s Eve…”

Their collective insurgency into the closed world of Japanese TV symbolized the ongoing penetration of the internet throughout society and is probably a harbinger of the future diffusion of the television entertainment world.

Candid Feedback from Some Viewers

After such a long night who did the viewers think won?

There was no doubt that many really enjoyed Kohaku this year, but the online reaction seems mainly to be one of relief.  Hiroaki Iima wrote, “…This year when we were hit by corona the venue was a little lonely with no spectators. When the infection began to spread, I was worried about what would happen to this year’s red and white…It turned out that there was no need for me to worry.  Kohaku turned out to be a success and was broadcasted safely.”

Like many other millennials and members of Generation Z, such as Hasetaku, tweeted on January 1, “Happy New Year!  When I saw RIZIN yesterday, I really liked Shibatar. Lol. The times have changed, and I want to support YouTubers on New Year’s Eve.  I want to make 2021 the year to start a revolution like Shibatar!!!”

He has definitely struck a nerve.

Perhaps, though, Genki summed it up for his nearly 4,000 followers simply by declaring that he was happy to be safe from Covid at home while watching “Gaki-no-Tsukai” on TV, eating squid, etc., and kicking back tall glasses of both beer and sake.

Japan’s tradition of marathon live TV at the very end of each year provided a familiar, reassuring source of comfort for Genki and millions of others like him across the country.

It has become a tradition for all of the performers on Kohaku to close out the evening by singing together “Hotaru no Hikari” (“Glow of a Firefly”), which has Japanese lyrics but is sung to the tune of the traditional Scottish folk song “Auld Lang Syne.” It was a great way to say goodbye (or good riddance) to 2020 and welcome 2021.

Big Hit Entertainment Japan has announced a new global debut project that will create an idol group out of Japan.
January 6, 2021

One of Japan’s longest running role-playing video games, Dragon Quest, will soon expand from the virtual world to a physical setting within…
December 29, 2020