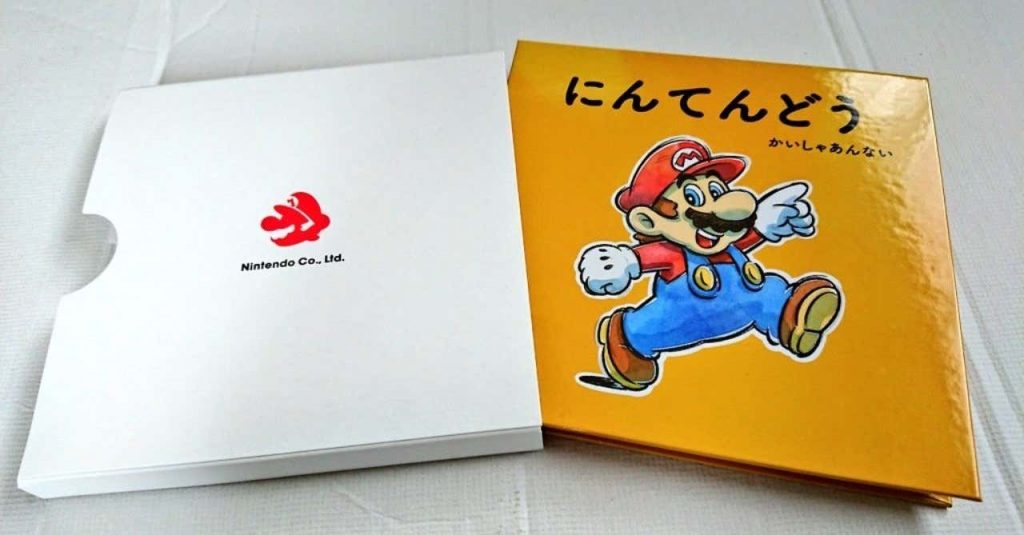 Beloved character Mario attracts prospective new hires for Nintendo by appearing in a corporate profile that is actually a picture book.

Times are tough–especially for brand new university graduates. Early on in the coronavirus outbreak, many actually had their hard-earned job offers rescinded at the last minute, sparking outrage across Japan. Financial difficulties forced even some of the country’s best known corporate giants to stoop to this level. The whole situation is somewhat ironic, considering how difficult it has been for companies in Japan to recruit new talent during the past several years. Up until the coronavirus struck there were reports of companies taking extraordinary steps to lure new hires. At least one global brand based in Japan has, apparently, outdone them all. Kyoto-based Nintendo produced a company brochure to introduce the company to new recruits, which has subsequently become a collector’s item.

A bidding war at auction!

Nintendo’s company brochure was originally available to college students free of charge. Now, this piece is demanding premium pricing at flea markets and on internet auction sites!  At the moment, the going price seems to be around 2,500 JPY (approximately US $25), but some bids are much higher.  Online chatter is building.  This piece of company brochure has become “a thing” and is also trending on Twitter in Japan.  Let’s see what all of the fuss is about…

While most official corporate profiles in Japan tend to be somewhat stuffy, staid affairs that do not naturally lend themselves to casual reading, Nintendo’s 2020 corporate “brochure” looks more like a picture book for children. It features none other than the beloved, fictional character Mario who first appeared in Donkey Kong back in 1981. Besides starring in more than 200 video games, Mario is also the company’s mascot. Thus this fictional protagonist who has literally been a perennial favorite for generations is the perfect “person” to introduce Nintendo to potential new employees.

Like many of Nintendo’s library of video game classics, this unusual company brochure became an instant hit. Potential recruit Shienguren wasted no time to repost on Twitter Japan. “I just got the company profile from Nintendo in the mail. The content about making games together is very cute.”

Another college senior wrote “when I received the Nintendo company profile designed with a really light feeling, I was trembling to see a very elaborate picture book…”

One student who must be from Hyogo Prefecture in the Kansai Region posted in their local Tajima dialect “Nintendo’s company brochure is really interesting.”

It seems as though this unusual campaign has achieved its intended effect. Nintendo’s HR Department may have, however, not expected just how popular their company brochure has become.

Some of the new recruits who received this company brochure immediately recognized its value as a collector’s item. They wasted no time re-selling it at flea markets and via online auction sites such as Mercari.

Despite the global pandemic, it is safe to say that Nintendo is doing just fine. As so many have have been forced into lockdown at home, demand for Nintendo’s products is unabated. New prospective hires would be wise to consider a career at this corporate giant in the world of gaming. It sounds like a great place to work and have a little fun at the same time.

The ending of the “story” includes a short message from none other than the original developer of Super Mario, Shigeru Miyamoto, whose title is now “fellow.”

It is an invitation to prospective future employees asking whether they would like to help put smiling faces on people worldwide by coming to work at Nintendo. There is an illustrated message that playfully appears without Chinese characters (kanji). It is written entirely in kana, a phonetic “alphabet” often used to write simple Japanese in children’s books. The world-famous game developer Mr. Miyamoto who enjoys a cult-like status in the gaming world also leaves the following, somewhat more serious message to new recruits:

From the front lines of game creation…

It should have originally been a technology for realizing free thinking, but, before we knew it, we can see that game development is now dominated by the pattern of technological development = attractiveness of products.

We want to be an organization that can surprise and please people with creativity based on unique and rugged ideas as well as technology.

Even if you are a little worried about technology, as long as you are confident in your personality and ideas, do not be shy about pushing (traditional) boundaries. You will find that there are plenty of opportunities available for breaking through.

Armed with this stirring message from game development legend Miyamoto, it is easy to see how new recruits could be inspired to join the Nintendo team. Maybe one of them will develop a new game based on the theme of this creative company brochure. In the meantime, they had better keep it for safekeeping.