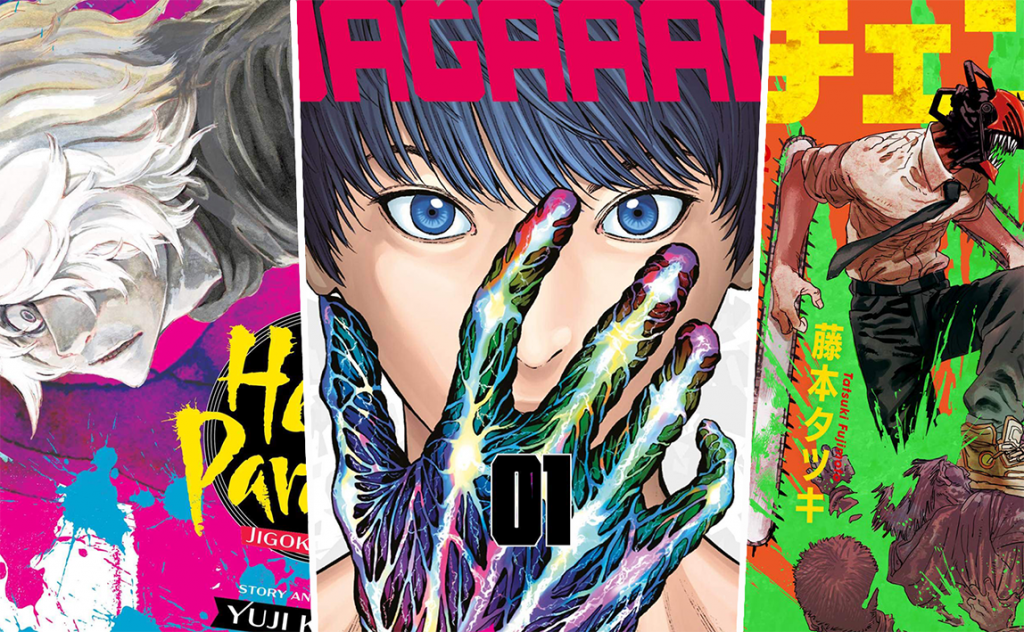 The Best New Manga that Deserve an Anime Adaptation

While there are many great manga stories that may never see the light of a faithful anime adaptation, a new generation always brings new contenders. Here are our 3 picks for an anime adaptation from recent manga series.

In order for a series to receive an anime adaptation in Japan, it typically requires successful sales numbers of its manga beforehand. However, even popular manga with great stories can get overlooked. Here is our pick for some of the most original current series that deserve an anime adaptation.

Jagaaan contains intense scenes that are often filled with violence, sex, and monsters. These mature elements added with a captivating art style and bizarre but riveting story make Jagaaan a must-read for any series manga reader who likes seinen manga. Although, that’s not the only reason why this manga is on our list. Jagaaan stands out not only with its art but also with its characters. The series features a number of different antagonists, none of which can be called completely evil. These morally grey characters give a realistic touch to Jagaaan’s otherwise insane world of talking birds and desire-fueled monsters.

Each character who turns into a fractured human, the monsters that are the main enemies in the manga, was at one time an average person who simply became overwhelmed by their desires. These desires often relate to power or sex, but even concepts such as a desire for justice, friends, or commitment can be a trigger that causes fracturing. It is when these characters with good intentions turn into horrible abominations that the series is at its peak. Right when you begin to sympathize with a character’s plight and root for them, you suddenly find them turning into a murderous monster that has warped their bodies along with their desires. This emotional roller coaster of storytelling mixed with fast-paced, violent battles that put Jagaaan in the number 1 spot on our list.

Jagaaaan follows the story of police officer Shintarou Jagasaki and the events that unfold when he one day becomes a fractured human. Jagasaki is one to hide his true emotions behind a false smile, all the while contemplating “shooting ’em up” to those around him who he finds annoying. Despite his frustrations, he remains a civil and docile member of society until one day he becomes infected with a frenzied frog. These strange creatures turn their host into fractured humans, creatures fueled entirely by their desires which take on more powerful and ghastly forms the stronger their desires grow. After the death of his girlfriend due to her turning into a fractured human, Jagasaki swears to revive her by hunting down other fractured humans with his newfound powers.

Hell’s Paradise: Jigokuraku can be summarized as a perfect blend of some of the best parts of other series. This bloody manga not only mixes genres such as action, survival, horror, and adventure all together but also borrows concepts seen before in other manga. For example, the fight for survival against terrifying monsters with a group of strangers is reminiscent of Gantz, while the main character Gabimaru’s ninja skills can remind readers of Naruto. In order to add its own originality, Jigokuraku also throws in elements of comedy and religious-based horror that help to blend all the different genres together.

Even when Jigokuraku goes to dark places where characters have their hopes stripped away, it can quickly switch back to lighthearted banter thanks to Gabimaru’s indifferent attitude. Jigokuraku’s intense battle scenes and large cast of characters would undoubtedly make for an amazing anime that would have you on the edge of your seat while watching. To make it even better, you won’t have to wait much longer! After the release of the last volume of the manga, Jigokuraku was announced to be receiving an anime adaptation. The announcement was given in January. Since then, no details of a particular release date have been given.

Jigokuraku tells the tale of Gabimaru the empty, a powerful yet indifferent shinobi who finds himself unable to be killed after being sentenced to execution. Gabimaru’s resilience to die and criminal reputation leads him to an offer to go on an expedition to find immortality for the Shogun. If he can provide immortality to the Shogun, he is promised to be pardoned of all crimes so that he may go home to his beloved wife. However, there is a catch: the island rumored to contain the elixir of life is a mysterious paradise filled with death around every corner. Accompanied by his assigned executioner, Yamada Asaemon Sagiri, Gabimaru struggles to just stay alive on an island with other equally dangerous criminals, terrifying diseases, and grotesque monsters.

Despite Chainsawman being a Shonen Jump series, which is often targeted towards younger boys and teens, it is not what you might expect from a typical shonen manga. Unlike other main characters, the main character Denji is not on a lifelong quest for revenge or aiming to be the next king of something or another. He doesn’t even really care about saving the world.

No, Denji is a simple man who only wishes to enjoy the basic pleasures of life, such as eating good food and, according to him, trying to see a pair of boobs. Although Denji may be content with chasing after the little things, when he narrowly escapes his own death by being resurrected as a half-devil hybrid called Chainsawman, things quickly take a turn for the unusual.

The unpredictability of the plot and the interesting personalities of the series will leave you feeling devastated when characters get knocked off. Usually, a manga filled with such an idiotic main character, this much dark humor, and violence may seem relatively shallow, but author Tatsuki Fujimoto skillfully writes the cast of characters to be painfully relatable. It is this reliability that adds a true feeling of impact to the story plot when a character dies. Despite the manga’s at times cruder art style, Chainsawman can rev up the action when it comes to fighting scenes. If this manga were to receive an anime adaptation, it is guaranteed to blow viewers away with its over-the-top fights with other Devils.

If Chainsawman doesn’t sound promising enough already, due to high manga sales, it was announced that studio MAPPA, the same studio behind shows like Dorohedoro, Jujutsu Kaisen, and Attack on Titan, will be bringing us a Chainsawman anime! As of now, no release date has been announced, but with Studio MAPPA in charge of the anime, it is guaranteed to be a high-quality anime.

Denji is an honest guy who makes a living by trying to pay off his deceased father’s debts while hunting Devils, monsters born out of human fears. One day, while at death’s door, Denji is saved by his one and only friend, his Devil partner Pochita. After Pochita replaces Denji’s heart, he is reborn as the devil hybrid Chainsawman. After joining Japan’s governmental Devil-hunting agency, Denji is sent into battle to fight monstrous devils. The goal of the association is to eventually track down and kill one of the strongest devils ever to exist, the Gun Devil.