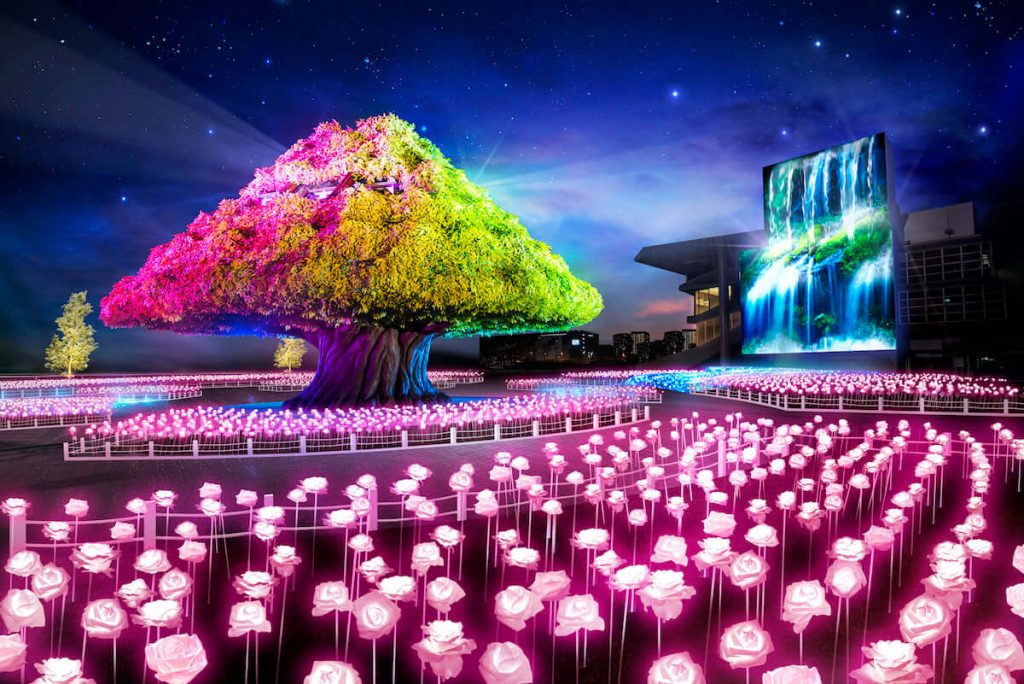 Check out the number one ranked light show in Tokyo! Tokyo Mega Illumination features gorgeous attractions that will take your breath away.

Neon lights and bright skylines that illuminate the night sky often characterize Tokyo.  Some areas of Tokyo are so well lit from the surrounding neon and LED lights that even when walking through these areas at night, they’re as bright as day.

While just walking around places like Shibuya and Shinjuku at night is enough to experience your own make-shift light show, Tokyo also has many official light shows to enjoy as well. In Japan, light shows, as well as Christmas tree decorations, are both referred to as “illumination.”

These kinds of light show attractions are often found at shopping malls, parks, or outside of major train stations in Japan.  Of course, while these places likely put on a great show, they pale in comparison to the top-ranked light shows found in Tokyo.

Tokyo Mega Illumination is a combination of a traditional light show utilizing lasers, light beams, and music.  Tokyo Mega Illumi also uses a synchronized fountain to shoot water in all kinds of shapes and forms that reflect the light beams along with the beat of the music.

The Tokyo Mega Illumination show started 3 years ago and has been increasing its scale each year.  It takes place at the Oi Racecourse, a horse racing stadium, in Shinagawa, Tokyo on days that there aren’t any races during the winter months only.

A Rainbow Fountain of Light

While the name may imply one big show, the Mega Illumi experience actually has 3 major components. The main light show is known as the “Rainbow Fountain of Light” and is a 15-minute show that combines their synchronized fountain with lasers and light beams that flash the colors of the rainbow along with the music.

The next component is the “Aurora Forest.”  Here, the latest laser technology is used to mimic the Aurora Lights in the night sky while you are surrounded by illuminated trees.  For a clearer picture, imagine trees decorated for Christmas, but on steroids.

The last component is known as the “Taiki Playing with Light” section. This section has a massive tree that happens to sit in a portion of the Aurora Forest that has its own set of lights that shine onto it in different patterns that follow the music.  It is said to look like something out of a fairy tale.

In addition to these 3 main sections, there is also a 100 meter (330 foot) long tunnel called the “Edo Sakura Tunnel” lined with Christmas lights that look like cherry blossoms that you can walk through.  There are also more cherry blossom and rice patty renditions made to light up outside of the tunnel as well.

At the Glow Otaki, loosely translated to “large glowing waterfall,” you can gaze upon a waterfall-style light show.  These two sections were added this year.

Furthermore, there is a restaurant where you can enjoy a meal while looking out at the show as well as the lit-up trees and aurora lights.  There is also a large open lawn for kids to play freely.

On top of this, also added this year was the “Big Naked Book” section.  I know what you’re thinking…but it’s not what you think.  While the name may sound a little weird and not kid-friendly, this section actually gets its name from a collaboration with one of Japan’s leading augmented and virtual reality companies, Naked Inc.  Why they named the attraction and company naked, however, remains a mystery to me.

Nonetheless, this section utilized augmented reality technology or AR, to see horses, horseshoes, and stars that pop up out of nowhere, causing you to feel like you’re in a real-life fairy tale.  Why horses?  Don’t forget you are at a horse race track!

When and How to See the Show!

Make sure you go and check out the Tokyo Mega Illumination while you can!  The show has already started and is on until April 2022 at the Tokyo City Keiba racecourse. The Tokyo Mega Illumination is on daily as long as there are no races held. Entrance opens at 4:30pm and doors close at 8pm before they turn off the lights at 9pm. Tickets are only 1,000 yen (8.80 USD) at the door, and 800 yen (7 USD) if bought in advance online or at your local convenience store. See you there!