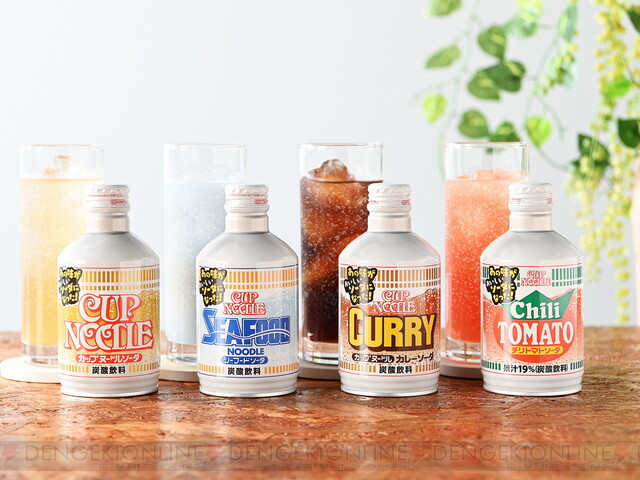 Nissin releases “Cup Noodle Soda” in 4 iconic flavors including seafood, curry, and chili tomato. Are you brave enough to try them?

Nissin’s iconic Cup Noodle series of instant noodles are popular worldwide and continue to be the most beloved brand of cup ramen in Japan since it started selling the world’s first instant ramen noodles back in 1958.

Nissin’s famous Cup Noodle line includes flavors like the classic “cup noodle,” “seafood,” “curry,” and “chili tomato,” all of which are delicious.  In fact, Nissin’s instant ramen noodles are so delicious that you often begin to have cravings for a hot bowl of Nissin ramen.

Luckily now, while the craving can easily be fulfilled after only the time, it takes to boil water, and the 3 minutes it takes for the noodles to cook, that thirst can be fulfilled even faster because if you’re up for it, Nissin has just released “Cup Noodle Soda.”  Yes, you heard that right.

Nissin released the sodas to commemorate their 50th anniversary of the Cup Noodle line.  You can now drink their original “Cup Noodle,” “Seafood,” “Curry,” and “Chili Tomato” flavors in soda (carbonated) form, and you get an entire 280 milliliters of it.

While some of you are likely thinking first of all “why?”, and of course “so how does it taste?”, it’s more than likely that some of the more brave people out there are dying to try it.  Well, you’re in luck.

Nissin will only be releasing a limited amount of sodas, and orders must be placed online at the Nissin online store or on sites including Amazon, Rakuten, and Yodobashi.  Further, Nissin Cup Noodle’s official Twitter account put out a statement with a hashtag where they called on consumers to decide whether the sodas are delicious or not.

The online stores opened for orders on September 13, 2021, so you’ll likely need to hurry up if you want to place an order.

How are Japanese People Reacting?

As you can imagine, this has been stirring up (or fizzing up) quite a storm on Japanese social media.  The tweet from the official account has almost 39 thousand Retweets as of September 16th, three days after it was posted.

While it doesn’t seem like anyone has made a video or post about trying it, here are some Tweets that explain how Japanese people have been reacting.

On the one hand, you have people like ChaCha, who claim they’re interested in trying one but understandably not too confident about being able to finish an entire soda.

Then you have those like Kicona, who claim at this point, they pretty much have no choice but to give it a try!  It makes sense as this is a limited campaign.

You also have those who feel the way Pumhallo do, who said that they are intrigued but feel as if they’d rather eat a tasty bowl of regular Nissin Curry Cup Noodles!

What do you think?  Would you give it a try?  If you manage to get a hand on some, let us know how they taste!  Enjoy!