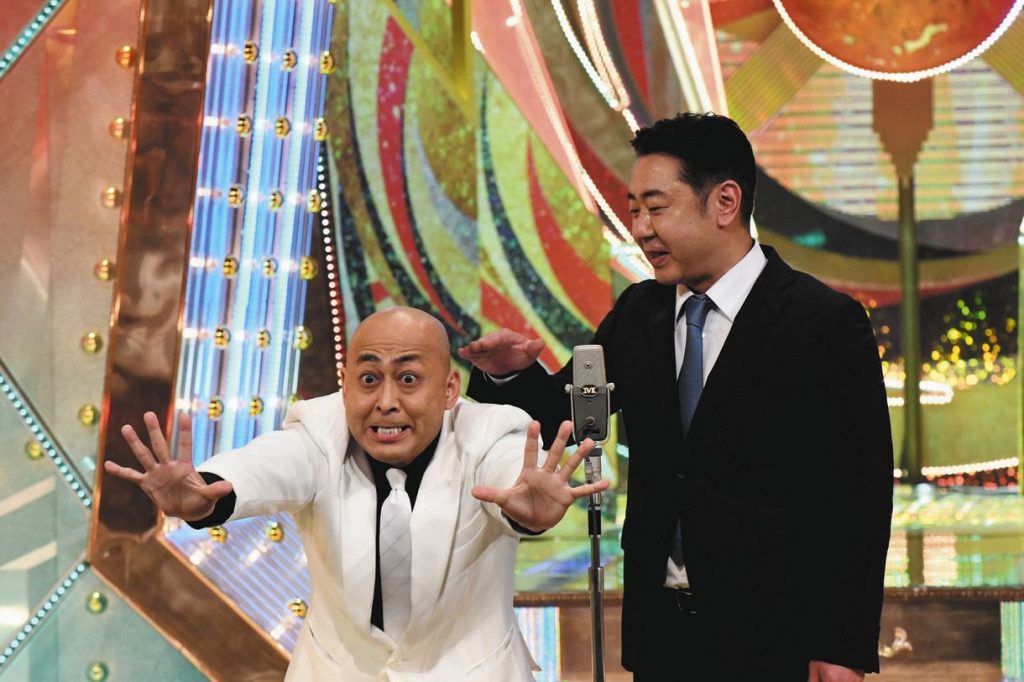 Two middle aged guys beat out more than 6,000 other comedy duos to ascend to the top of Japan’s comedy scene and capture the prize money.

Remember when in the classic comedy movie franchise Rush Hour Chris Tucker, as the character James Carter, would poke fun at the too serious fictional Inspector Lee, played by Jackie Chan?

The pair’s predictable yet hilarious banter, with Chan delivering deadpanned retorts in the face of Tucker’s insufferable jokes, is somewhat akin to the classic form of Japanese comedy called manzai (漫才). It has roots that date back centuries.  The Japanese have, naturally, refined this form of oratory into a fine art and have an annual competition to celebrate the amateur and professional comedy duos at the top of their game.

This year’s winning team was the comedy duo Nishikigoi (錦鯉), which means “colorful carp” in Japanese.  Nishikigoi beat out more than 6,000 other teams to win the 10 million yen (US $87,500) grand prize at this year’s annual M-1 Grand Prix for manzai comedy.

Besides their enviable talent, one thing that made this year’s winners special was the fact that Nishikigoi’s 50 year-old and completely bald-headed Masanori Hasegawa and 43 year-old Takashi Watanabe comprise the oldest comedy duo that has ever made it to the final round.

What is Manzai Comedy?

The Japanese term manzai (漫才) literally translates as “comedic talent.”  Its primary characteristic is how two polar opposites interact with each other.  Like Tucker’s character in Rush Hour, there is the boke (ボケ) character who plays dumb.  Their counterpart, who is like Chan’s character, is called tsukkomi (突っ込み).  This role is designed to reprimand the boke’s habit of forgetfulness.  The tsukkomi often uses physical slapstick to get their point across.  Sometimes the comedians will switch roles mid-way through a routine.

There have been many famous comedy duos throughout history, but now the most talented groups perform at the annual M-1 Grand Prix.

To determine the most talented manzai comedy group of the year, Japan holds the annual M-1 Grand Prix, which is known for its cutthroat competition.  The tournament is open to both professionals and amateurs, as long as they have been together for 15 years or less.  This year a total of 6,017 groups, the most in history, entered the M-1.  Only 10 groups made it to the final round which aired on TV Asahi on March 19.

The rules of competition are quite strict.  What would be fair game in the West is, in general, off limits.  The official rules state that the following topics are out-of-bounds,

Content that is offensive to public order and morals, or contains content that may cause general discomfort, such as slander, defamation, discrimination, violence, obscenity, or sexual depiction.

Those guardrails probably pose quite a challenge for a comedian.

It’s winner-take-all, and, in addition to the prize money, some of the sponsors also provide the grand prize winners with unusual bonuses.  For the past two years in a row the national convenience store chain FamilyMart provided the winning duo with one year’s worth of fried chicken.

While they may have set their sites on the chicken, after reaching the finals only to lose in the end during the past two years, the comedy duo Nishikigoi finally captured the grand prize after this year’s brutal competition.

Nishikigoi’s Hasegawa and Watanabe are now represented by Sony Music Artists (SMA). One of their signature skits features a gourmet report about how one of them must swallow meat dishes whole because he has almost no back teeth.

The pair has also developed a memorable routine based upon Japanese pinball or pachinko. Watanabe described,

In the pachinko story I don’t talk much to begin with because I want people to laugh at my movements. I just show them the flow of the pachinko game and the gags. In other stories, I show my character more in the conversation, so people can understand that I’m a bit of an idiot. …… So, people around me said that my pachinko story would either explode or fall flat. In my case, I sometimes find it physiologically unacceptable at first sight (laughs).

At one point his counterpart, Hasegawa, blurts out,

I want to be a pachinko machine!

He goes on to sing (don’t worry if you’re a little confused at this point),

Raisin bread is a loss in appearance!

Watanabe, bewildered by Hasegawa’s wild and silly reach-around action, follows-up by giving him a tsukkomi jab. There was no complicated logic to the story, but it was so funny that everyone was blown away by the nonsense and ridiculousness.

At this point you’re probably saying to yourself, “Yeah, right…moving on.”  Just trust me; It’s funny.

Nishikigoi already had a lot of fans going into the competition, and they praised the team for winning.

When it was announced that Nishikigoi won the final round, these fans cried because they were so happy.  The video has already received more than 150,000 views on Twitter and certainly provides a real window into a casual home setting in Japan.  Satodaidai tweeted,

Tsubaki-san (wife?) is crying. Once again, congratulations to Nishikigoi for winning.

Nishikigoi is unlikely to the be comedic equivalent of a one hit wonder.

Almost all of the big time manzai comedians, most of whom hail from the Kansai area in and around Osaka, such as Gaki No Tsukai’s comedy duo Downtown, Ninety-Nine, better known as “Nainai” (ナイナイ), Bakusho Mondai (爆笑問題), and Sandwich Man leveraged a strong performance in the M-1 Grand Prix to launch their careers into overdrive.

Takeshi Tomizawa and Mikio Date of the comedy duo Sandwich Man won the M-1 Grand Prix in 2007.  You can read more about them in “Symbols of the North: How Comedy Duo Sandwichman Became Japan’s Most Loved TV Personalities.”

The M-1 is, essentially, a ticket to the big time and, in particular, stardom in Japan’s notoriously closed television broadcasting industry.

Thus, we are likely to see a lot more of Nishikigoi from now on.

Understanding the language of comedy in a foreign language and actually getting the punch line of a comedian are particularly challenging for non-native speakers.  Likewise, unless it is delivered in flawless English, Japanese comedy acts tend not to translate well outside Japan.  That said, the slapstick employed by Nishikigoi may, at the very least, help them to breakthrough to a certain extent with an international audience.  In the meantime, their material will keep students of Japanese entertained.