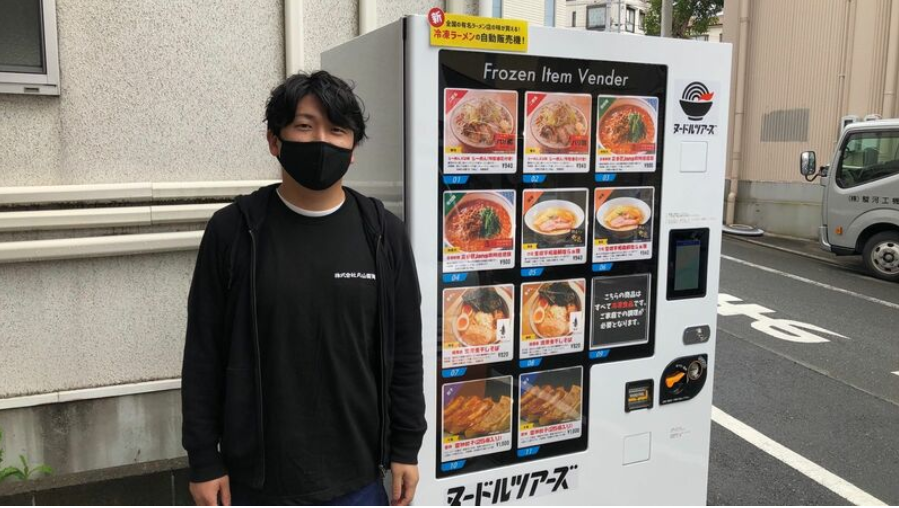 As businesses struggle to turn a profit during the pandemic, one noodle shop has turned to a noodle vending machine to bring in customers

The Impact of the Pandemic on the Ramen Industry is Widespread

While the pandemic has been hard on many of Japan’s small local businesses, none have been hit more than ramen shops. Of course, when ramen shops begin going under, the noodle making-business also feels the effects. According to 33-year-old Koji Maruyama, who runs a made-to-order noodle factory in Tokyo’s Ota Ward, he has lost over 80% in sales from either order cancelations or returns since the state of emergency was announced last spring. Mr. Maruyma is the proprietor of Maryuma Seimen, a noodle factory that specializes in an array of noodles from soba to udon. Before the start of the pandemic, a typical day saw anywhere from 50-60,000 orders or noodles. However, those numbers have since dropped drastically. He now sees around only 10,000 orders a day.

How One Noodle Shop is Fighting Back Against the Pandemic

When the pandemic began and sales plummeted, Maruyama Seimen immediately set to work on implementing an online mail-order system for ramen restaurants to order noodles safely. While initially small, sales from various restaurants slowly began to build into higher numbers. From May, the online sets of frozen ingredients, noodles, and soup packs even began to be bought by famous ramen restaurants after being introduced to the company at a ramen event.

Despite online sales beginning to pick up, the large number of cancellations from ramen shops left Maruyama Seimen with a lot of leftover noodles. In order to combat this, a noodle stand was put up in front of the company building. This stand, which runs every Sunday, allows citizens to directly purchase noodles for themselves. To further optimize the direct selling of noodles to customers, Mr. Maruyuma decided to take it one step further and implemented Japan’s first noodle vending machine in March. With the vending machine in place, customers can now purchase noodles 24 hours a day, 7 days a week.

In March of this year, the company launched “Noodle Tours,” a vending machine that sells ramen noodles from various famous restaurants. The noodle machine was adapted from an ice cream vending machine. For now, there is only one machine located in front of the company.

However, the company receives dozens of calls every day requesting them to install a noodle tour machine somewhere. According to Mr. Murayama, “I think these changes were something I had to do at some point. I feel that Corona has accelerated that time.” Although the company is still struggling to regain its former sales, Maruyama Seimen’s perseverance and adaptability show a promising future for this noodle company.

For details on the noodles sold by Maruyama Seimen, check out their online shop below.