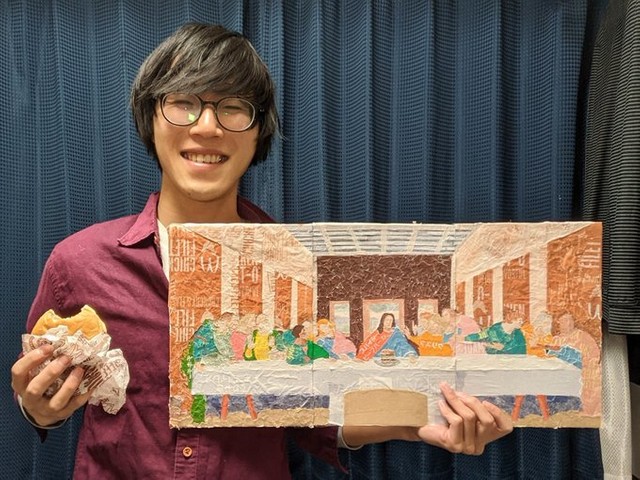 Fusion of Hamburgers and an Ancient Artistic Technique

People are so creative, and some of them have way too much free time on their hands! Case in Point: Meet Takaya (aka @tky888tky), a would-be modern day Leonardo da Vinci who is definitely “lovin’ it” at his neighborhood McDonald’s. Artists are always exploring new ways to communicate their ideas, demonstrate their skills, and test the boundaries of their freedom of expression.  If you’re looking for something unique, you have come to the right place.

While the rest of the Twittersphere has been focused on the ongoing saga of how the world’s richest person, Elon Musk, has recently bought Twitter, a popular user in Japan, Takaya, decided to take a break from his usual routine of posting original cosplay and share his most recent masterpiece. It was first attempt at the ancient Japanese artistic technique of chigirie (ちぎり絵), and he is definitely a natural.

Chigirie (“chee gee ree eh”), which has been popular in Japan for more than 1,200 years, is the art of using torn pieces of colored paper as components of a larger collage.  From a distance the result resembles watercolor.

Although quite the artist, Takaya had never before tried this medium, and he did not choose to test his talent with just any old type of paper.  A die-hard fan of McDonald’s, Takaya decided to recreate Leonardo da Vinci’s The Last Supper entirely out of the wrapping paper used for McDonald’s hamburgers.

Takaya posted his work on Twitter on April 22, 2022, and the rest is history.

His tweet is proving to be so popular—now with almost 175,000 likes—that, for all we know, Italian officials are already making space on one of the walls of the dining room of the former Dominican convent of Santa Maria delle Grazie where the original hangs, to showcase Takaya’s modern day riff on the classic.

Seriously, though, what inspired Takaya to recreate The Last Supper entirely out of McDonald’s hamburger wrappers?

Inspiration for the McDonald’s Version of The Last Supper

Earlier this month a reporter from Japan’s Maidona News caught up with Takaya to ask just that.  The artist explained,

In early March of this year, news broke that McDonald’s would be revising its prices. I am so indebted to McDonald’s that I eat at McDonald’s 3~4 times a week. I eat at least 100 chicken crisps a year for sure.

The reporter asked whether the artist would be be annoyed once the planned price increase goes into effect. Takaya retorted,

I’m neither sad nor angry about it. Even if the price goes up, the food is still cheap. I am rather grateful to McDonald’s for continuing to offer low-priced food during this period of inflation.

You just cannot buy that kind of loyalty. McDonald’s executives must love this guy!

I also had random thoughts floating around my head like ‘I’m going to have a McDonald’s party all by myself before McDonald’s raises their prices.’ It was at this point that I became convinced that somehow I would show my gratitude for all the help from McDonald’s that I had received so far.

Regarding how he made the leap to The Last Supper, the reporter probed more deeply. Takaya divulged,

I didn’t have a concrete idea at that point. Later, I stopped by an exhibition of graduation works at an art university in Tokyo, and while I was looking at the exhibits of the students, I realized, ‘Yes, I am a painter, too.’

Probably while wolfing down yet another hamburger, Takaya had an epiphany.  He continued,

I thought it would be easier to understand if I used only McDonald’s wrapping paper as the material for the work.  I would try my hand at chigirie for the first time. Also, because McDonald’s wrapping paper comes in a wide variety of colors, I figured that I could probably draw any kind of picture on it…I chose Leonardo da Vinci’s masterpiece The Last Supper because of its connection to a dinner party.

Well, to this day Takaya may not be aware of the religious overtones of this particular work of art, but he is correct that The Last Supper does, in fact, portray a “dinner party.”

As it is not possible to head down to your neighborhood art supplies store and simply pick up McDonald’s hamburger wrappers, Takaya’s first challenge was to eat enough McDonald’s food to amass a sufficient supply of wrapping paper.

It turns out that Takaya is a fan of most of the items on McDonald’s menu.  This was a good thing, as he needed to collect a variety of colors of wrapping paper.  The exact list of base supplies that went into The Last Supper included a total of 50 wrappers from the following menu:

Sometimes Takaya would order more than he could eat in one sitting just to get ahold of a particular shade of paper used for the wrapper.  Nothing went to waste, however.  Takaya would simply freeze what he could not eat and save it for another time.

It turns out that the wrappers are not just made of paper.

Despite having consumed hundreds or, possibly, thousands of McDonald’s meals throughout your lifetime, you may have overlooked a somewhat hidden feature of their wrappers.  Takaya explained,

McDonald’s wrappers have a thin vinyl film on the back, and it tends to repel glue. So, first I had to invent the process of peeling off the vinyl film, which was also nerve-wracking and difficult.

Somehow the artist overcame these challenges and found ways to make his version of The Last Supper unique.

Note to Self: Keep this in mind (way back in the corner) in case you get the urge to mimic Takaya’s masterpiece.

Although Takaya readily admits that he must study more deeply the “story” of The Last Supper, he found creative ways to enhance some of the finer details.

Takaya chose, for example, to tear a piece of wrapping paper printed with the phrase “hot inside” and paste it on the head of Thomas, whom he had heard is said to be “a hot-blooded type.”

Perhaps at some point in the distant future art critics will decipher the somewhat hidden details, as they critique Takaya’s work.

At the very least many casual observers have recognized the value of his work.  Some have even suggested that McDonald’s pay Takaya 1 million yen (approximately US $7,700) for the original and display it at Hamburger University near their headquarters in Chicago…that is, if Santa Maria delle Grazie doesn’t make a bid for it first! The NFT world is also probably already knocking on Takaya’s door.

Takaya stressed that, despite McDonald’s recent decision to raise prices in Japan, he has no intention of making his version of The Last Supper into a real last supper.  Takaya still loves McDonald’s and will probably continue to visit his neighborhood McDonald’s multiple times per week until, of course, he gets around to watching the documentary Super Size Me.  Follow him on Twitter to see what he does next.