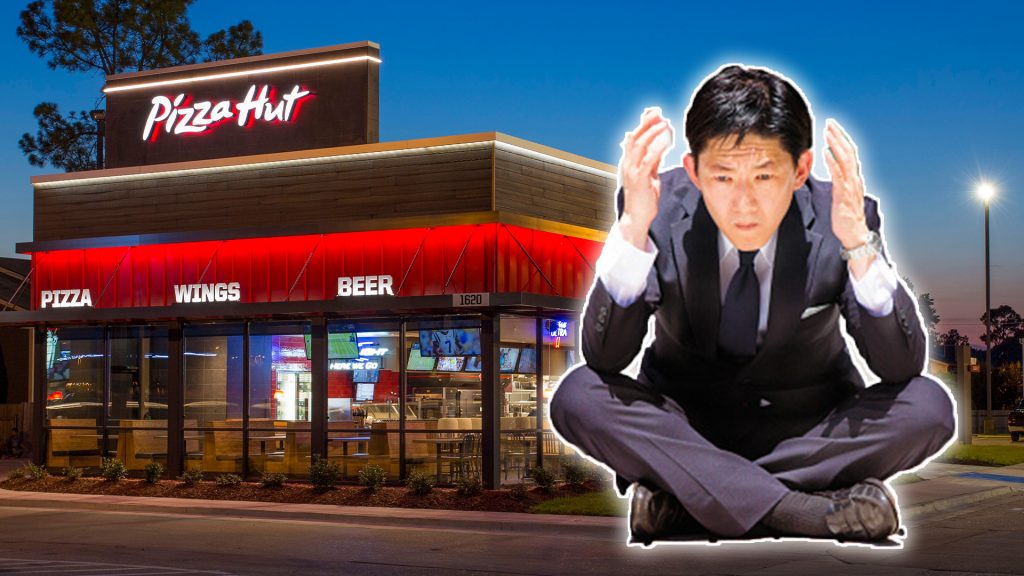 Who wants to order some Pizza Hat? No, that wasn’t a typo, I really meant Pizza “Hat.” You know, Pizza Hat, they even have a hat in their logo!

Well, that’s not a hat, and it’s actually “hut,” but you already knew that. Japanese people, however, didn’t. In fact, a recent ad campaign that Pizza Hut Japan ran to promote their “GOLDEN HUT WEEK” sale and “HUT PARTY” sales resulted in thousands of Japanese being shocked to learn that the “hut” in Pizza Hut wasn’t “hat.”

“But, they’re spelled differently.” Yes, that is the case in English, however, in Japanese, the way you write “hut” and “hat” in katakana, one of the three “alphabets” used in Japan, is totally identical. They are both written and pronounced exactly the same as “ハット,” pronounced “hatto.”

@ton2x68k Tweeted that he “just noticed that the spelling of ‘hut’ and ‘hat’ was different all along!” He goes on to add that not noticing should be forgiven because “no matter how you look at the logo, it’s a hat!”

This realization came as the result of the ad campaign’s stars, comedian Kazureza, meaning, “Kazu Lazer,” and his big, red, and fluffy co-star, Mukku, who was originally a mascot on a children’s TV show in the 70s, took part in a video interview that had some clips go viral on social media. The clip in question was when the two were asked what the meaning of Pizza Hut’s “hut” was.

Kazureza then had to explain to the confused Mukku that it wasn’t referring to a “hat,” and that “hut” actually refers to something like a “shack” or a “cabin.” Kazureza then had to explain to Mukku that no, the logo isn’t actually supposed to be a hat, despite its looks. This interaction left many Japanese people absolutely bamboozled, with many speaking out on Twitter.

@chisatoilet was surprised to find out that even the brand ambassador himself, Mukku, didn’t even know that the brand he was promoting wasn’t “Pizza Hat.”

This mass confusion is because of two key factors. The first is that katakana is the syllabary used for all foreign, as in non-Japanese, words, names, and places, meaning both “hut” and “hat” need to be written in katakana. Of course, the Japanese word for “hat,” boushi, isn’t written in katakana.

The second and most important factor is due to katana, and the simpler hiragana “alphabets” are phonetic. Don’t get me started about kanji, as well, kanji isn’t phonetic and would take another entire article to explain.

Getting back to it, because katakana is a phonetic syllabary system when Japanese people write and pronounce foreign “katakana” words, they have to use their limited phonetic “letters” and “sounds” to get as close as possible to foreign pronunciation.

Here’s where it gets even more confusing for Japanese people, and in a way, even funnier for those of us familiar with the true meaning of “hut.”

After a second look at the Pizza Hut logo, it’s easy to see why thousands of people would mistake the “hut’s” roof for a hat. This paired with the Japanese pronunciation, “hatto,” doesn’t help make things less confusing either.

@latina_sama posted a picture of the Pizza Hut logo explaining to their followers that the “hut” in Pizza Hut isn’t referring to a “hat” and that the logo is actually the roof of a “hut” rather than being a hat.

What do you think? Do you see a hat in the logo?