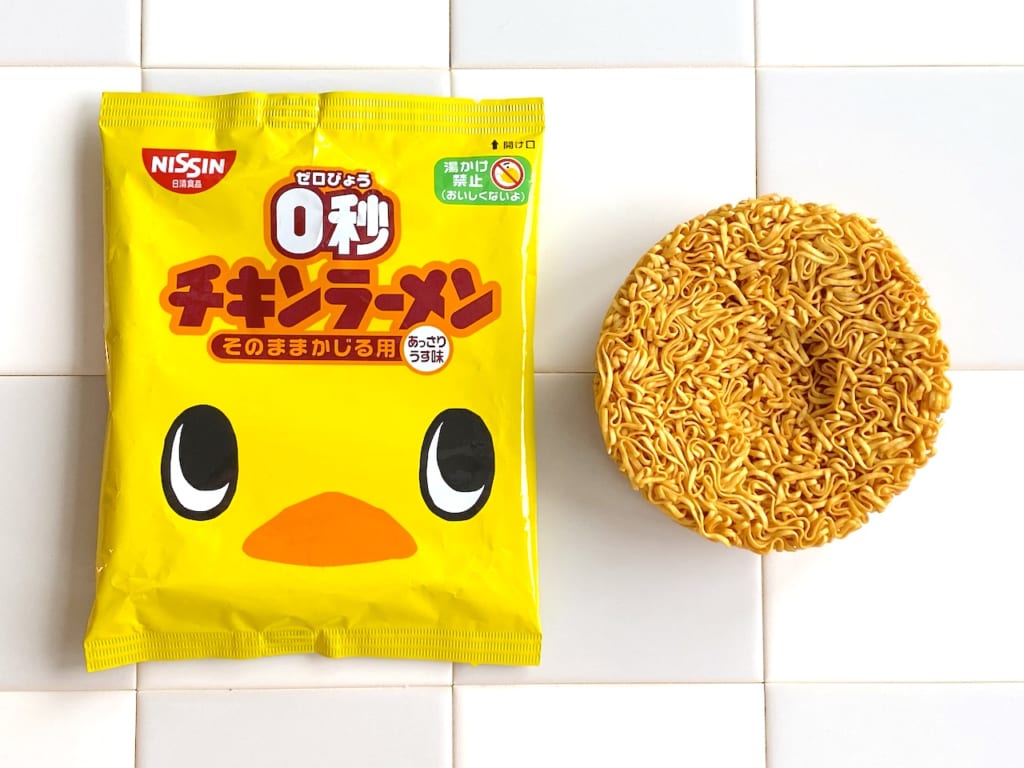 Have you ever considered eating the dry block of instant ramen? I thought so. We probably all have at some point, because, well you know, boiling water and waiting an entire three minutes can be a daunting process.

Luckily for those in Japan, Nissin Foods, one of the biggest manufacturers of instant ramen worldwide, came out with the “0 Second Chicken Ramen.” The product was such a huge hit that after 23 days, Nissin announced that they were temporarily suspending the chip-like snack because they simply couldn’t keep up with the demand. In other words, it was just too successful.

To cater to all of us who’ve at some point thought “I bet this would taste good without even cooking it,” Nissin decided to make a modified version of their famous instant Chicken Ramen so that it could be enjoyed like a bag of potato chips, requiring “0 seconds” of waiting time. Thus, on April 4th, 2022, 0 Second Chicken Ramen hit the shelves across Japan.

The 111 yen (85 cents USD) block of lightly salted instant ramen came in a yellow pouch with their iconic Chicken Ramen mascot on it along with a caption translated to “made to eat as is.”

The 0 Second Instant Ramen Snack Was Too Successful

I’m sure you must be wondering, what does a massive success like the 0 Second Chicken Ramen taste like? Well you aren’t the only one. Once word of the snack hit social media, people began rushing to their local supermarkets to find a pack to give it a try. Even local buses in Osaka were getting in on the hype!

@umibouzu67 on Twitter posted a picture of the 0 Second Ramen saying he finally found a pack and that it was really crispy and delicious, but it made him want to try adding boiling water to it!

Nissin hadn’t anticipated the product to be this successful and apparently wasn’t ready to match the newfound demand. So, 23 days after its release, on the 27th of April, 2022, Nissin announced that they were temporarily suspending the sale of the product nationwide.

Nissin Foods stated that “we deeply apologize for causing a great deal of inconvenience to our customers, business partners, and related parties.”

While it isn’t clear when Nissin will resume the sale of the 0 Second Chicken Ramen, people are literally selling individual packets online on marketplaces like Amazon and Mercari for up to 3,000 yen (23 USD). Keep in mind that they were originally on sale for just 111 yen (85 cents USD).

From Instant Ramen to a Lightly Salted Snack

The idea for an instant ramen product that you could eat without cooking actually first came about back in 2017 when Nissin started promoting the idea that Chicken Ramen was good to eat even without cooking it. They had small messages encouraging customers to try it on the packaging.

While many tried it, the majority of them expressed that the uncooked block of ramen was way too salty to enjoy. Now, fast forward to 2022, Nissin answered. Thus, the flavoring of the 0 Second Instant Ramen is “lightly salted.”

Interestingly, just as Nissin, a company famous for instant ramen, whose soupless snack had to be suspended, the Oyatsu Company, known for their famous BabyStar Ramen, a chip-like soupless instant noodle snack, released the Instant BabyStar Instant Ramen on May 5th, across the nation.

It was literally like a product switch between the two companies. It would be like an ice cream company switching to cones while the cone company switched to making ice cream. As you can imagine, this stirred things up across Japanese social media.

@wiwaxia_m on Twitter posted a picture of the BabyStar Instant Ramen with the caption “The 0 Second Chicken Ramen is for eating as is while the new BabyStar is for adding hot water? It’s like ‘I am you, and you are me.’”

@D_kokeshimaru also posted a picture of the BabyStar Cup Ramen saying “I found the antithesis of the 0 Second Chicken Ramen.”

While it isn’t clear if the Oyatsu Company was responding to Nissin’s inability to meet their demands, the timing of the “switcharoo” product is very suspicious.

Hopefully, you can find a pack of the now very rare 0 Second Chicken Ramen near you. If not, you’ll likely need to pay a lot more for a pack online or wait until they’re back in stores for good. Also, be sure to try its “antithesis” the BabyStar Instant Ramen!