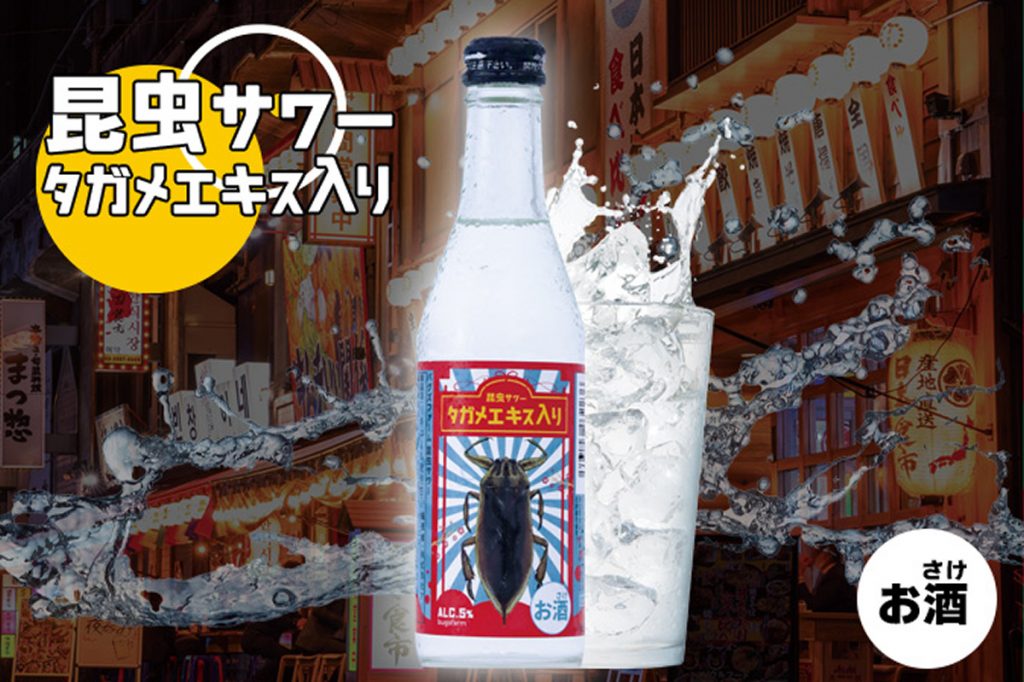 You may need beer goggles to get up the courage to try Japan’s newest alcoholic beverage made from extract of the giant water beetle.

While sake or “rice wine” is still considered to be the national drink of Japan, beer reigns supreme in terms of volume. Although microbrews have yet to go mainstream in Japan, the Japanese are fond of many other types of distilled alcoholic beverages including shochu, umeshu, whiskey highball, awamori, etc. Now there is a new challenger on the block, but you may need a little courage to give this one a try.

Bugs Farm, a Japanese online merchant dedicated to food made from insects, has just released a new carbonated whiskey called “Insect Sour.”  It is made from lethocerus deyrollei, a species of giant water beetle (aka waterbug).  You may find it on the menu in Japan as tagame (田鼈 or 水爬虫).  This brand-new alcoholic beverage can be recognized by its provocative label and its unique scent.  This “secret sauce” in the smell comes from an extract of a pheromone that aims to recreate the scent of the male giant water beetle.  While you may need “beer goggles” to get up enough courage to give this a try, it has been described as “refreshing” and “fruity” (euphemisms right up there with “it’s good for you”).

First, just what is a giant water beetle and why would anyone want to bottle it?

Similar to some of the people who are likely to order this drink at a bar, the giant water beetle is a large predator which is active at night.  It is one of—if not–the largest water bugs in Japan.

They used to be found all over the country, but, due to the use of pesticides and the increase in outdoor lighting, the population of the Japanese giant water beetle has been drastically reduced.  They are now classified as an “endangered species” by the central government, making this insect extremely valuable.  There are, after all, rumors that this bug—especially the male—is an aphrodisiac.

Thanks to Bugs Farm, you can now get a taste of this unusual delicacy on the rocks.

Insect Sour from Bugs Farm Now on Sale in Japan

Insect Sour is a whiskey sour with 5% alcohol content. It retails for 638 yen (US $5.62) per 250ml bottle. Bugs Farm sells it online with a minimum order of only a single bottle.

It is only a matter of time before Insect Sour, which debuted in Japan on December 1, makes its way into this vending machine in Tokyo that exclusively features drinks made from insects.

Besides Insect Sour, you can also purchase the soft drink Tagame Cider to get a taste of the giant water beetle for those that do not drink alcohol.

A competitor to Bugs Farm, Japanese food and drink maker Takeo also specializes in bugs. Their drink Tagame Cider is produced in a “hazard analysis and critical control points” (HACCP) certified plant in Japan using pure, locally-sourced water. A 200 ml bottle retails for 480 yen ($4.25) for a single bottle, but it is also possible to purchase packs of 3 or 24 for a volume discount.

For those who want more than just a drink, it is also possible to get a taste of the giant water beetle.

The Acquired Taste of the Giant Water Beetle

Because eating them raw may cause parasites, giant water beetles are usually cooked by dipping them in salt water and then grilling, frying, boiling, or steaming them.

In some countries, the giant water beetle is said to be an indispensable ingredient on the dinner table and is very much loved as a soup stock or dressing in powder form.  The beetles themselves have a high-fat content and are plump to the touch.

The meat is variously described as flavoured like citrus, black licorice, or even bubble gum and jelly beans. Like many arthropod insects, people often compare the taste to sweet shrimp, scallops or crab meat.

Others have embellished the sensation as “rich, savory, and delicious” and “elastic and satisfying.” Hmmm…

These dishes can often be recognized by their smell.

Giant Water Beetle Scent Will Spice Up Your Insect Sour

The giant water beetle is a member of the stink bug family.  While slightly less smelly than stinkbugs, giant water beetles secrete an odor from a place called the incense sternum.  Many people find this smell to be refreshing like mint or banana.  Yeah, right!

The scent of female water beetles tends to be stronger than the odor of the male.  That is why the drinks available in Japan are made exclusively from the male and why market prices in Thailand are 5x higher for males.

So, ready to give it a try?

While digging into a dinner of deep-fried giant water beetles may be a little much for beginners, Insect Sour from Bugs Farm certainly provides a relatively painless way to try a small portion along with a healthy dose of whiskey.  What could be a more appropriate drink for the classic toast “Here’s to the nights we’ll never remember with the friends we’ll never forget?”  At the very least remember “Don’t knock it, ‘till you try it,” and you’ll be fine!

Tokyo Banana celebrates its 30th Anniversary with Tokyo Banana Steamed Curry Buns! Would you give them a try?
December 24, 2021