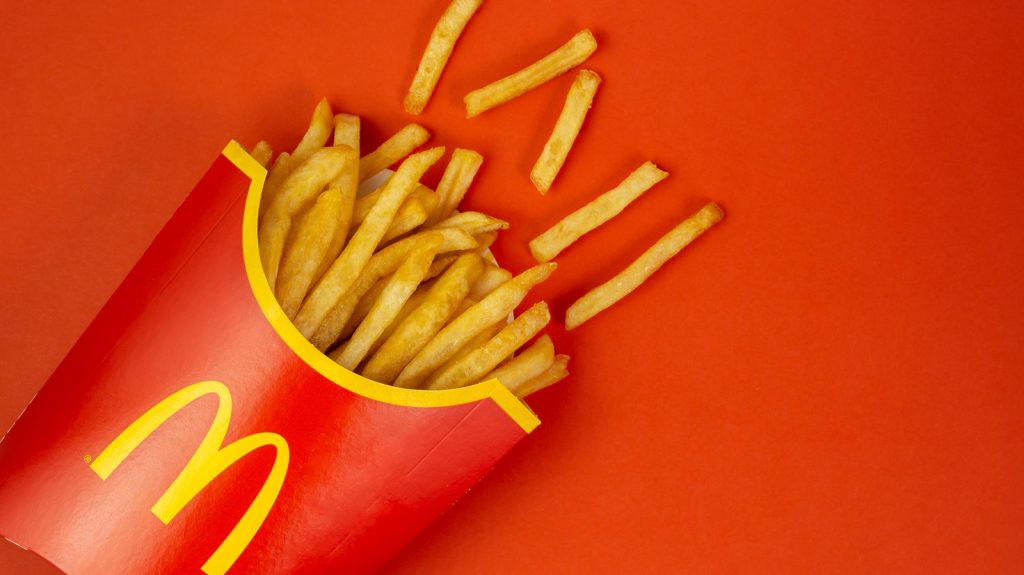 No more fries…at McDonald’s? What on earth is going on!? Find out what a potato shortage in Japan means for restaurants like McDonald’s!

“Do You Want Fries With Tha… Oh, Wait”

One of the best parts of ordering fast food is being able to pair your burger of choice with a big side of fries.  It’s basically a given that any time you go to a McDonald’s, they’ll have a mountain of french fries ready to be scooped up into a paper container and onto your tray. Or at least it was, until the potato shortage him Japan last December.

Nowadays, next time you go to order a Big Mac in Japan, you probably won’t be asked, “do you want fries with that?”

That’s right, McDonald’s Japan’s potato stash is running low.  In fact, it’s running so low that they officially decided to only sell S size or small servings of fries from January 9th onward, in addition to the brief stint from December 24th to the 30th last year when the same thing occurred. While medium and large size portions are expected to return in February, nothing is set in stone at the moment . When it comes to size, let me tell you, a “small fries” in Japan is a very small portion indeed.

Okay, so why on earth is McDonald’s running out of their delicious golden fries?  While other countries have also been impacted, Japan in particular has been hit hard.  It all has to do with the fact that McDonald’s Japan sources its potatoes from the United States and Canada.

Why don’t they just use Japanese potatoes?  For exactly the same reason you like McDonald’s so much, for their consistency.  Every time you go, you get the same quality and taste (sometimes), all around the world.

Because of McDonald’s strict global standards, Japan doesn’t have any potatoes similar to those used to make the famous fries ready at the quantities, and likely price points they need.  Thus, McDonald’s Japan imports Russet Burbank potatoes produced and processed in the US and Canada via Vancouver, where there have been long stints of consistently bad weather and flooding that has been delaying the shipping process of potatoes to Japan substantially.

On top of this, Japan is third on the list of nations with the most McDonald’s locations with  2,975 operating restaurants behind the United States and China.  Therefore, McDonald’s Japan requires a massive amount of potatoes to consistently supply all 2,975 locations.

How is McDonald’s Japan Dealing with the Potato Shortage?

To cope with the shortages of potatoes coming from Vancouver’s ports, McDonald’s Japan has actually been sending potatoes from the U.S. east coast via airmail.  Still, it hasn’t been enough potatoes to resume selling medium or large-sized portions.

At the moment, McDonald’s executives around the world are in conversation with suppliers and importers about potentially developing new supply sources and transportation routes for raw materials, likely unprocessed potatoes, in the future.

Other Places Also Been Impacted By the Potato Shortage

To add, McDonald’s isn’t the only place affected by the potato shortage in Japan.  Other popular restaurant chains that have been impacted and have actually stopped the sale of certain menu items include Bikkuri Donki, a “hamburg” chain that serves hamburger steaks with rice, and Freshness Burger, a Japanese burger chain.

Interestingly, McDonald’s Japan has been pushing its other side menu options on its customers since the potato shortage started.  Namely, they are seeing increased sales for their Edamame-Corn side dish consisting of, you guessed it, edamame beans and corn kernels.

McDonald’s lovers jokingly stated that though it had been on the menu since January of 2021, many had never ordered it until 2022 as fries had always been their “go-to” side.

Does the Potato Shortage Mean Opportunity for Competitors?

While the fast food chains and restaurants that outsource Russet Burbank potatoes are suffering form the shortage of supply, other competitors are taking advantage. For example, the convenience store chain MiniStop has been aggressively capitalizing on the situation as they recently released the “Bucket Potato,” an extra large portion of french fries served in a “bucket.”

MiniStop has been able to do this because their potatoes are sourced from Europe, meaning their shipping routes weren’t affected by the bad weather and flooding in British Columbia, Canada. MiniStop has made it clear that the inspiration to add the “Bucket Potato” to the menu has nothing to do with the potato shortage that competitors are suffering from, the timing of the release is suspicious but “hey, it’s just business, nothing personal.”

What does your current McDonald’s order look like now?