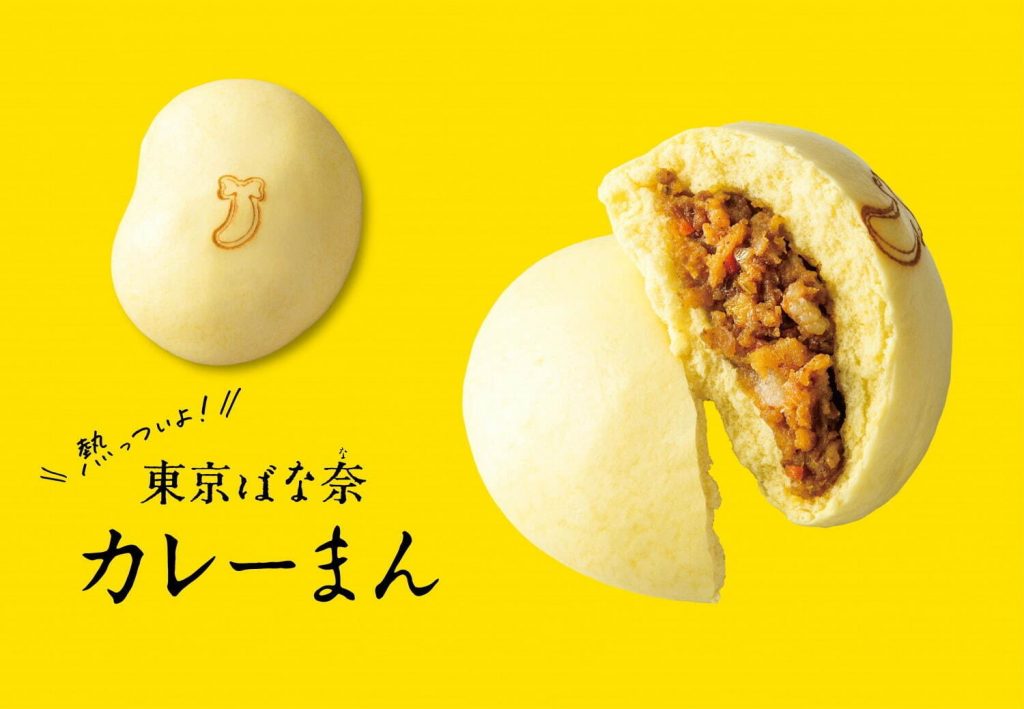 Tokyo Banana celebrates its 30th Anniversary with Tokyo Banana Steamed Curry Buns! Would you give them a try?

Do Curry and Bananas Go Together?

Japanese curry…and bananas?  While those two things are delicious individually, combining them sounds a little like something that someone who has, no pun intended, “gone bananas” came up with.

Well, it seems the one who’s “gone bananas” is none other than those at Tokyo Banana, again, no pun intended.

What is a Tokyo Banana?

For those who don’t know, a Tokyo Banana is a delicious banana shaped, banana custard cream filled sponge cake that is the official sweet souvenir of Tokyo.  Before adding the banana puree cream filling, the sponge cakes are steamed to add even more moisture and are sold individually wrapped in fancy souvenir boxes.

Tokyo Bananas can often be found throughout train stations, supermarkets, and department stores in Tokyo and sometimes in other cities in Japan.  Before Tokyo Bananas were introduced, many other products were considered the “go-to” souvenirs from Tokyo, but Tokyo Banana was the first to include “Tokyo” in the brand name.  Ever since, it has become the souvenir of Tokyo, and has been the number one souvenir sold in Tokyo for years.

Lucky for you, if those flavors and other delicious sounding products aren’t enough, or you are feeling adventurous, Tokyo Banana is now selling Tokyo Banana Hot Curry Steamed Buns to celebrate their 30 year anniversary.

The hot buns are made from a classic Tokyo Banana sweet dough filled with curry made with beef, pork, onions, and carrots.  They’re said to be packed with all the amazing flavors of Japanese curry, combined with a sweet, buttery and banana-ey taste. Which if I’m being honest, doesn’t sound too bad. For further reference, the steamed buns are similar to the pork or shrimp steamed buns you may find at a Chinese restaurant.

The now 30-year-old company run by Grapestone Co. will only be selling the 380yen (3.35 USD) curry banana buns at the Ebina Service Area, a highway service area in Ebina, Kanagawa prefecture, known as Expasa Ebina.  Please note that the buns will only be sold on the southbound side of the expressway only.

Why the “Tokyo Banana” product will only be sold in Kanagawa prefecture in Ebina, 30 kilometers (19 miles) outside of Tokyo is unknown, but surely it will be a hit.

What do the Tokyo Banana Curry Buns Taste Like?

A number of curious Tokyo Banana fans who want to see for themselves whether the buns are sweet or spicy have already made their way down to the Ebina Service Area to give it a try.  Some gave the ice cream a try as well!

@R35maso on Twitter posted a picture of the Tokyo Banana booth and the curry bun with the caption “the Tokyo Banana Steamed Curry Bun that my followers let me know about!  It was delicious!”

@rayto39 provided his followers with a much more detailed explanation of the flavors.  He notes that after hearing about the curry buns and ice cream on TV he went to give them a try and that the curry bun was packed with a rich, mild filling and was delicious!  He went on to outline that the ice cream was also good and that since the curry bun was so filling, his “snack” became lunch!

On the other hand, @of_masato posted a picture of the curry bun booth and a bright view from his windshield on the ride home saying that the curry bun was “just any other curry bun, nothing special” and that he’s driving home squinting his eyes.  Maybe he was just having a bad day.

Do you think you’d like it?  I know I want to give it a try!

You may need beer goggles to get up the courage to try Japan’s newest alcoholic beverage made from extract of the giant…
December 9, 2021