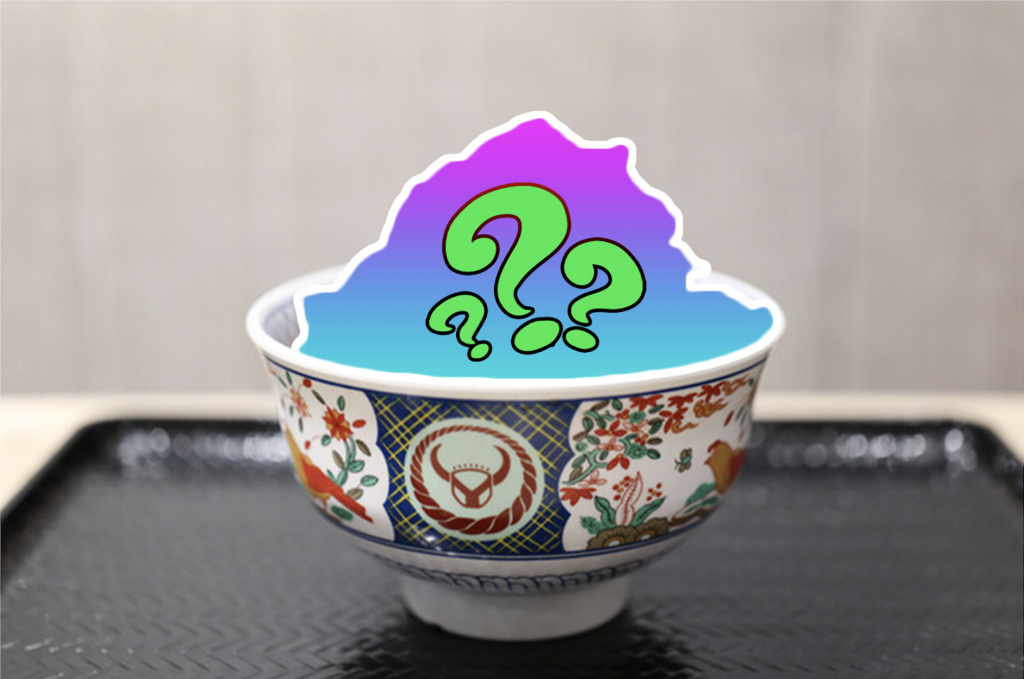 Your favorite gyudon beef bowl chain Yoshinoya has an underground menu that you probably haven’t heard of! Check out their secret items!

Sometimes, when we grab a bite to eat at our favorite fast-food restaurants we find ourselves wanting more.  While at times this simply means more food, sometimes, we need something a little different, and then, it happens. Your brain’s creative juices start flowing and voila, you just came up with something that should be on the menu.

Of course, these sorts of things tend to happen late at night, like, after downing some “adult beverages.” What I’m referring to are the times you or a friend unleash their inner mad scientist and suggest something like “dude… McDonald’s needs to have a burger with a beef and chicken patty!”

Most of the time, you need to “build” these kinds of special menu items yourself, but when the restaurant actually does it for you, it’s referred to as ordering off the “underground menu.” Where underground menu items come from, when they were first served, and when they became well known, is the stuff of legend.

Underground Meals You Might’ve Heard Of or Eaten!

Some well known underground menu items include the McDonald’s “McGangBang,” a McChicken sandwiched between the patties of a Double Cheeseburger, the “Monster Mac,” a Big Mac with up to 8 patties, and then there’s the “Surf N’ Turf,” a Filet-O-Fish sandwich layered within a Cheeseburger.

Of course, McDonald’s isn’t the only place with an underground menu. Other fast-food restaurants like KFC and Burger King also have secret menu items. While these insane creations scream “made in America,” the U.S. isn’t alone when it comes to secret menu items.

Japan is home to thousands of McDonald’s, Starbucks, and KFC locations, but it’s also home to another genre of fast food: Gyudon, AKA the beef bowl. A delicious bowl of rice topped with beef and onion simmered in soy sauce, mirin, and dashi. Out of all the places you can snag a beef bowl in Japan, one of the most famous gyudon chains is Yoshinoya.

And to answer the question in your head, yes, Yoshinoya does indeed have an underground menu. While you can’t get as creative as something like a “McGangBang” with beef bowls, let’s check out the 3 secret items that Yoshinoya offers.

The tsuyudaku-daku is a modified version of the tsuyudaku gyudon. You see, tsuyudaku simply means “extra tsuyu” or “broth.” It’s kinda like getting extra beef broth, or an extra dunk in the broth with a beef dip sandwich.

The regular tsuyudaku means the employee won’t let as much broth drip off of the beef before piling it on top of a hefty serving of rice.  This way, the broth makes its way to the bottom of the bowl flavoring the rice a little more.

When you’re lucky enough to land at a location where the employee is willing to serve you a tsuyudaku-daku, not only will they hook you up with a very brothy serving of beef, they’ll also scoop up even more broth to pour all over your beef bowl.  While a regular tsuyudaku results in maybe a centimeter or two of broth at the bottom, a tsuyudaku-daku means that the broth will come up at least halfway up the bowl making each bite that much more tasty. Some even want their tsuyudaku-daku’s to be more like a soup than a rice bowl!

On the contrary, the tsuyunuki gyudon is a beef bowl with no broth at all.

Next up is the shogadaku gyudon.  While shoga means ginger, shogadaku refers to a ton of beni-shoga, red pickled ginger that is usually found at every table in gyudon restaurants to be added on as a topping.

When ordering a shogadaku, this means that you want your gyudon topped with a mountain of beni-shoga. You really, and I mean really, need to like ginger to order this one because it will likely overpower the taste of the beef if too much is added.

Of course, you can always make your own shogadaku gyudon with the beni-shoga at the table, but it’ll probably take you a long time to use the tiny little tongs to pile a mountain’s worth of ginger on top of your beef.

Moreover, those who want more can go for a shogadaku–tsuyudaku-daku for extra ginger and broth!

Last up is the negidaku gyudon. As negi means “onion” in Japanese, I’m sure you already know this means extra onion. However, negidaku doesn’t just mean onion, it refers to adding extra onions that were cooked with the beef inside of the broth.  So, they have a slightly brown tint to them and are packed with slightly sweet, savory flavors.

Unlike the beni-shoga offered as a complementary topping for you to add yourself, extra onion wasn’t offered officially, meaning you had to order the special negidaku gyudon if you wanted more onions.

While this one started as an underground menu item, it was so popular that Yoshinoya actually added the negidaku gyudon to their official menu nationwide in Japan so you can definitely try this one, or all of them the next time you eat at a Yoshinoya. If you’re feeling creative, make your own variations for example by adding an egg on top of any of these!