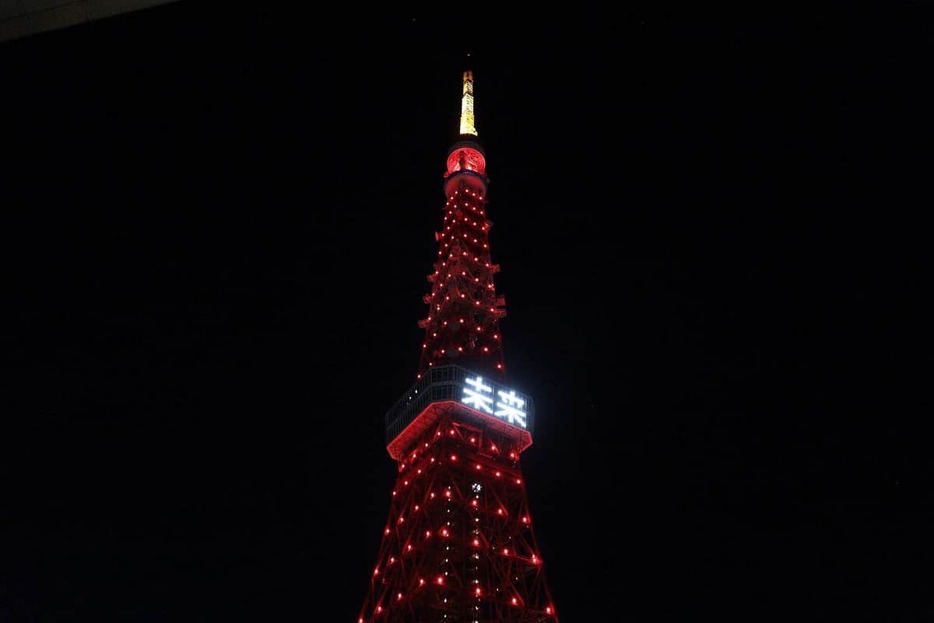 The Tokyo Tower was bathed in red for Chinese New Year, but this symbol of the capital city proved to be a lightning rod for protestors.

At 6:30 pm this past Monday in Tokyo, on the eve of the traditional Chinese New Year, which began on Tuesday, February 1, Japan helped to usher in the Year of the Tiger at Tokyo Tower. The symbol of the capital city since 1957 had been bathed in red, the traditional color of China, with 268 LED lights that had been installed on 17 levels. Although less lavish than previous years due to Covid-19, the ceremony was quite a dramatic way to welcome the Lunar New Year. This gesture of goodwill also served as a symbol of support for the Winter Olympics which are set to begin in Beijing on Friday.

Like most of East Asia, for centuries the Japanese used to celebrate New Year’s Day in conjunction with the traditional start of the Lunar New Year, which occurs at the beginning of February.  Japan switched to the Western Gregorian calendar back in 1873, but ceremonies marking the “Chinese New Year” are still practiced throughout the country.  Bathing the Tokyo Tower all in red to mark the occasion has, however, become one of the most high-profile events associated with this date since this relatively new tradition that began 4 years ago. The original intention was meant to welcome the throngs of visitors from China who used to frequent the capital before the coronavirus led to the closure of the country to all non-resident foreigners.

Japan Pulled out All the Stops

Bathing the Tokyo Tower in red to commemorate the beginning of the Chinese New Year has turned into a major event.

This year Japanese table tennis Olympic champion Ai Fukuhara, a beloved figure in both Japan and China, reported live switching off between Japanese and Chinese from a helicopter hovering above the Tokyo Tower. You can learn more about this influential, bilingual sports figure who, despite recent scandals, remains popular in both countries in “Japan’s ‘Girl Next Door’ Ai Fukuhara Gets Caught up in an Extramarital Affair.”

Back on the ground level, world-acclaimed Japanese drumming group DRUM TAO performed with their trademark energy. The characters mirai (未来), meaning “future,” appeared mid-way up the tower in bright white lights in sharp contrast to the black evening sky. The intention was to encourage people to focus on a future after the coronavirus has been conquered or at least put under control.

Although the Tokyo Tower was lit up in bright red only for a few hours, it acted as a lightning rod for protestors eager to shed light on what many characterize as Beijing’s atrocities.

The Red Tokyo Tower Acted as a Lightning Rod for Protestors

There are many in Japan who are fearful of the current government of China.  Protestors took advantage to use the ceremony as an opportunity to get their messages across.  They chanted,

Overthrow the CCP and Xi Jinping! Crush the CCP! and Smash the Chinese Communist Party!

Like at past protests in the city, there were people wearing Tibetan flags and Inner Mongolian (Southern Mongolian) flags. There were also banners with flags of regions that have diplomatic and human rights issues related to China, including Uyghur, Taiwan, and Hong Kong.

While the Japanese government seems to want to maintain reasonably cordial relations with China, they are being forced to confront the Chinese government over the hot-button issues for the West.

Threading the Diplomatic Needle with China

The Japanese government has been caught up in the middle of ongoing controversy with their much larger neighbor, China.

Japanese Prime Minister Fumio Kishida was on hand for the ceremony.  He commented,

Since the spread of the new corona disease, the international community has been working together to confront this difficult challenge. Japan has also made efforts to contribute to the international community by providing vaccines to various countries. Japan will never forget the debt of gratitude to those who extended a warm hand to us when we were in distress (alluding to China). When the world is in a difficult situation, Japan would like to continue to make contributions that are within its power. Japan will continue to cooperate with the international community. I will do my best to overcome the new coronavirus and usher in a new era. I hope that this year, the Year of the Tiger, will be a year of powerful vitality and improvement for all of you.

Only two days before during an interview on television Kishida had, however, recalled a telephone conversation that he had with Xi Jinping, President of the People’s Republic of China and General Secretary of the Chinese Communist Party, in October 2019,

I think we had some positive conversations in the run-up to the 50th anniversary, but at the same time, I also said that we must say what we need to say about Hong Kong and the plight of the Uyghurs in Xinjiang. I would like to make a decision on what to do in reality with Japan-China relations while placing importance on these various dialogues and communications.

Although the coronavirus has been used as an excuse to keep postponing an official state visit to Japan by President Xi, perhaps the ongoing tension between the two powerful neighbors is what is really behind the delay.

Xi was originally scheduled to visit Tokyo in spring 2018 under the Abe administration, but the visit has been repeatedly pushed off many times since that point.  Two prime ministers later, a date for Xi’s visit is still up in the air.  Kishida explained,

We are not at the stage of discussing a specific date.

Like the rest of us, those two will just have to continue to make do with Zoom calls. They have much to discuss.

It took weeks for the Japanese government to fall into line with their Western allies and, ultimately, decide not to send official diplomatic representatives to Beijing in 2022.  That could not have gone down well in China.

Against this backdrop, the gesture of friendship and comradery with China symbolized by making the Tokyo Tower shine bright red on Monday evening was, possibly, a temporary olive branch or maybe a signal for a desire for stronger ties.  In any case, bathing the Tokyo Tower in bright red—even if only for a few hours—on the eve of the beginning of the Chinese New Year and just before the opening ceremony of the winter Olympic games certainly indicated Japan’s recognition of their neighboring superpower.  Now all eyes will be on Beijing as the world tunes in for the next winter Olympics.